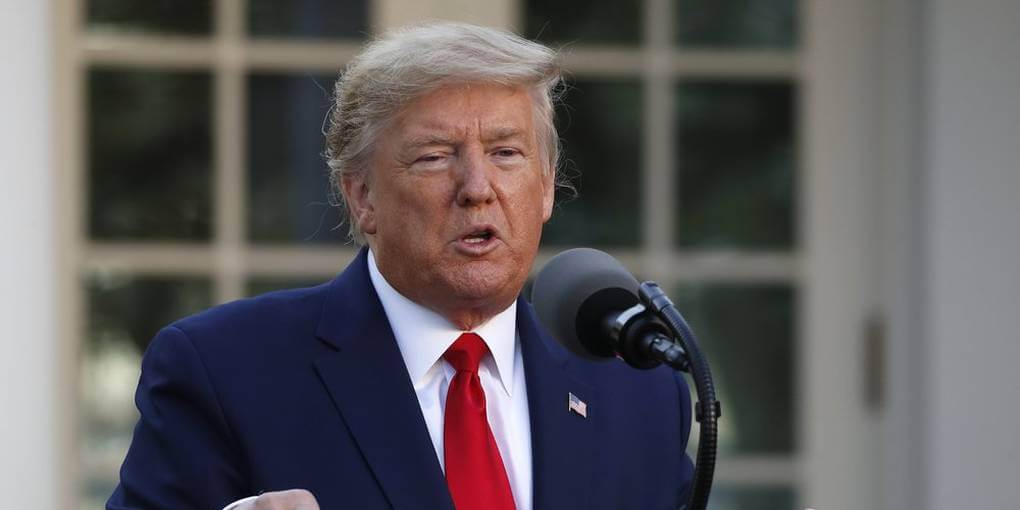 Washington – The US’s one-month entry ban for visitors from Europe to combat the coronavirus is to be extended, according to US President Donald Trump.

These and similar restrictions would remain in force and may even be tightened, Trump said at a press conference in the White House rose garden. He left open until when the entry stop, which was supposed to expire in mid-April, should continue. Measured by the number of confirmed infections, the United States is now the most severely affected by the coronavirus pandemic worldwide.

WHO’S ALLOWED IN THE USA

Trump announced on Sunday that the restrictive protective measures to curb the coronavirus epidemic in the US should be extended until the end of April. Since mid-March people from the Schengen area, Great Britain and Ireland can no longer travel to the USA. This does not apply to Americans, certain diplomats and Europeans who have long-term work permits in the USA, a so-called green card. Their relatives are also exempt. The regulation should initially apply for 30 days.

In the fight against the coronavirus, the US has now tested more than a million people for the pathogen, according to Trump. “Today we have reached an important milestone in the war against the coronavirus,” said Trump. “We have done far more tests than any other country in the world.” That is true in absolute terms, but not in terms of population. For example, South Korea tested more people per capita than the United States.

TRUMP AS A SOUTH KOREA EXPERT?

On Monday evening, Trump made a mistake on Monday night. When asked by a reporter about the per capita comparison of tests between the two countries, he said: “I know South Korea better than anyone else. (…) Do you know how many people are in Seoul? Do you know how big the city of Seoul is? 38 million people. It’s bigger than anything we have. ” In fact, according to the South Korean government, 9.7 million people live in the capital Seoul – almost 52 million across the country.

STILL NOT SUFFICIENT TESTS IN THE USA

Even though tests in the United States have increased significantly, there is still a shortage. In a guest article for the Washington Post published online on Monday, Maryland’s Governor Larry Hogan – who, like Trump, belongs to the Republicans – and Michigan governor Gretchen Whitmer (Democrats) wrote: “There simply aren’t enough tests, medical supplies and other life-saving equipment, to cope with the scale of this pandemic. ”

Meanwhile, the number of deaths from Covid-19 lung disease in the United States rose to more than 3,000, according to data from Johns Hopkins University, which recorded 3008 deaths on Monday evening (local time). The number of confirmed infections with Sars-CoV-2 in the USA rose to more than 163,000. This means that there are still more known infections in the USA than in any other country in the world, ahead of Italy, Spain, and China. In terms of the number of deaths, the USA is behind Italy, Spain, China, and France.

NUMBERS IN THE USA ARE DRAMATICALLY GROWING

The spread of the coronavirus epidemic in the United States has recently accelerated dramatically. For example, the number of known infections had only passed the 100,000 mark on Friday. Around 1,500 dead had been reported by then. The website of researchers at the University of Johns Hopkins is updated regularly with incoming data and therefore shows a higher level of confirmed infections than the official figures of the World Health Organization (WHO) and the US health authority CDC.

Trump prepared Americans for dramatic coronavirus crisis casualties on Sunday. If it is possible to limit the death toll to 100,000 through containment measures, “then we all did a good job together,” said Trump. Protective measures to contain the virus should now apply until the end of April. Trump was optimistic that the worst could be over by summer. “We can assume that we will be on the road to recovery by June 1st.”

The US east coast state of New York with the metropolis of the same name has become the epicenter of the coronavirus pandemic in the USA. Because the capacities of the hospitals there are not prepared to infect large sections of the population, provisional clinics are set up and existing facilities are expanded with additional beds. A Navy hospital ship also arrived in New York on Monday.

New York’s Democratic Governor Andrew Cuomo appealed to medical staff in other US states on Monday: “I ask healthcare workers across the country: If the situation in your own community isn’t urgent, please come to New York.” Support for nurses and doctors is essential.

Another hotspot is California on the US west coast. At least 50,000 additional hospital beds are needed there to manage patient care during the corona crisis, Governor Gavin Newsom said on Monday. With a new initiative, he wants to mobilize an additional 37,000 doctors, nurses, nurses and pharmacists in the coming weeks, such as getting staff out of retirement or employing students, said the democrat.