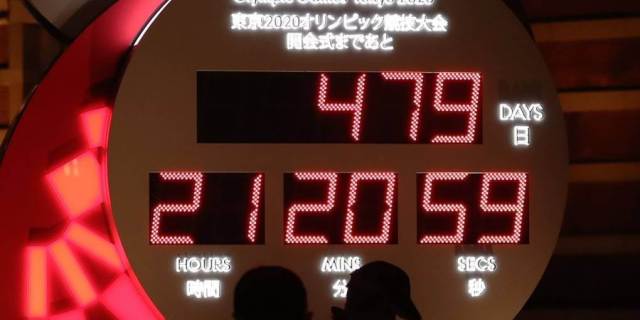 Frankfurt / Main – The new Olympia clock at Tokyo Central Station is ticking. According to the announcement on March 31, there are still 478 days left until the opening ceremony on July 23, 2021.

“The later, the better, because nobody can predict what will happen to the coronavirus pandemic,” said Johannes Herber, managing director of the Athletes Germany Association. Because it is not just a restart and a race against time for the Olympic makers, but also for the athletes. They have to work out new training and competition plans and re-motivate themselves after the pandemic mandatory break is still open.

“The qualified athletes will find it easier to get up. But everyone will make it, the Olympics are too big for that, “said Herber. However, the director-general of the German Athletics Association expects that many of them will first go through a low. “Olympics are the highest for every athlete in his athletic career,” said Idriss Gonschinska. “Therefore, despite the comprehensibility of the corona crisis, such a significant Olympic cancellation initially throws the athletes and the coaching team back mentally. So it is important to find something new. ” However, he was convinced that the athletes and their teams would “work on this in the following weeks and be motivated to be there in 2021”.

However, the top athletes will find it more difficult or easier for the new start to the games for various reasons. “When I narrowly missed Olympia four years ago, I said that 2020 should be my moment,” said 23-year-old 800-meter runner Marc Reuther from Frankfurt in the “Bild” newspaper. “It’s brutal for me as an athlete.”

A number of athletes such as Ronald Rauhe also feel this for reasons of age. “Now I have to let that sink first,” said the 38-year-old Olympic Olympic champion from 2004 in Potsdam. He had been working towards his sixth game for four years. Now he had to “talk” to his wife about how to proceed.

In the truest sense of the word, medal candidate Frank Stabler, who wanted to end his career after the Olympics this August, also has to pull through. The 30-year-old definitely continues. “Another year, another chance to get even better,” wrote the flagship wrestler on Facebook. For another reason, the marathon runner Katharina Steinruck found the laying “hard”: at almost 31 years of age, she wanted to take a baby break.

For turn ace Marcel Nguyen, on the other hand, the postponement of the Olympics is an advantage. “I got valuable time,” said two-time Olympic silver medalist in 2012. Time to get back in shape after a serious shoulder injury. For national climbing coach Urs Stocker too, the postponement for the new Olympic sport is “maybe not so bad”. Now you can prepare even better: “We have gained a year.”

However, the majority of qualified or potential Olympic starters – the German Olympic Sports Federation- are counting on a team of around 400 athletes – consider the new Tokyo date to be ideal, depending on the circumstances. “In order to guarantee fair competition for all athletes, the date is almost optimal,” said Hannes Ocik, batsman of the Germany eight. “This now gives us the opportunity to take a deep breath and build up structurally.”

But it is something special to approach the topic mentally. “I think that will play a role again when the training sessions start again and you have to do without family or girlfriend for a long time,” said Ocik.

Water jumper Patrick Hausding can also make friends with the new date, because “from the training methodology” it is the best time for the most valuable competition. Other associations would also have enough scope to adjust their calendar accordingly.

But getting back to the same level after a year is not easy, according to experts. “Athletes in technical sports, in which details need to be refined every day, are currently having huge problems because the sports facilities are closed,” said Professor Ingo Frobose of the German Sport University Cologne in the ARD “Morning Magazine”. Small movements in the brain would fade if they were not practiced on a daily basis.

He also sees big differences between endurance and speed sports. “The endurance that is reduced significantly less,” said Frobose. In the high-speed / speed sports, it all comes down to tiny things, “and when athletes are a year older, we already have a problem,” he predicted.