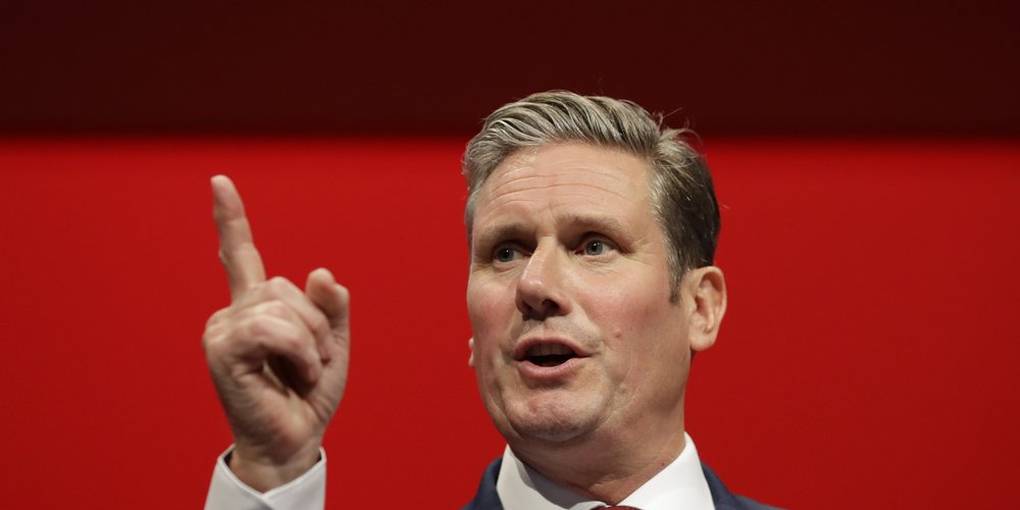 London – He has made a name for himself as a human rights defender and chief prosecutor – now Keir Starmer is set to unite the deeply divided Labor party as the new opposition leader in Britain.

As the British Social-Democrats announced on Saturday, the 57-year-old was elected a new Labor leader. He succeeds Jeremy Corbyn. Under his leadership, Labor suffered the worst defeat since 1935 in the December general election. The previous education policy spokeswoman Angela Rayner was elected.

The former human rights lawyer Starmer prevailed against his rivals Rebecca Long-Bailey and Lisa Nandy with around 56 percent of the votes after the first counting round. His choice is seen as a departure from the tightly leftwing course of the British Social Democrats in recent years, which has been an ordeal for the party. The 70-year-old left-wing Corbyn and his fellow campaigners were repeatedly criticized for tolerating anti-Semitic tendencies in their party. Here, too, Starmer should work towards a new start.

But Starmer is not a second Tony Blair. He has announced that he wants to reconcile the left and the pragmatic wing of the party. Whether he succeeds in this will largely determine his chances of becoming dangerous to Prime Minister Boris Johnson’s Tories.

Starmer was unable to celebrate at a special party convention, as originally planned, due to the coronavirus pandemic. In a video message, he described his election as party leader as “the greatest honor and privilege” of his life. “It comes at a time like no other in our lives,” said the MP for the London constituency of Holborn and St. Pancras. «The coronavirus has stopped our normal life. Our cities, towns, and villages have become silent, our streets have been deserted. Public life has almost come to a standstill and we miss each other. »

As expected, Starmer was reluctant to criticize the government’s chaotic response to the coronavirus pandemic. The fear of creating the impression that political capital is to be extracted from the crisis is likely to be too great. There will be no “opposition for the sake of the opposition”, but rather constructive cooperation, said the politician. Nonetheless, Labor would question the government’s arguments and highlight critical issues such as where the government failed or did not act quickly enough.

Johnson’s conservative government is under great pressure with the rapidly growing number of corona deaths. It has announced plans to significantly expand coronavirus testing and to purchase ventilators and protective clothing for hospital staff. However, progress has so far been moderate. The number of deaths from COVID-19 lung disease in the UK rose by 708 on Saturday – a new daily record – to 4,313.

Johnson congratulated Starmer on his election victory and called on the leaders of all opposition parties to cooperate in the fight against the corona crisis. “We have a duty to work together during this time of national emergency,” the prime minister wrote. He invited the opposition party leaders to a briefing with government experts next week.

Congratulations also came from Germany. With the new party leader, Labor has “a high-profile fighter for justice and a committed representative of the interests of workers”, the SPD top duo Saskia Esken and Norbert Walter-Borjas said.

In his speech, Starmer did not say a single word about leaving the EU. He acted as a Brexit expert in the shadow cabinet of Corbyn’s and is considered an opponent of the EU exit. Last year he vehemently campaigned to put a second referendum on the Labor Party’s agenda. Corbyn, on the other hand, had been slow to accept it.

Labor’s contradictory stance on Brexit is one of the reasons why the party has lost most of its core voters in the former industrial and mining regions of northern England and the Midlands. Starmer will, therefore, be careful not to call out too loudly for an extension of the Brexit transition phase. “The dispute over whereabouts or leaving is over,” he said during a podium debate with his rivals in February. Nevertheless, the MEP and European Commissioner for the SPD party executive, Udo Bullmann, believes that Starmer could put pressure on Johnson: «Because of his clear stance on Brexit, Keir Starmer is a tougher nut for Johnson when it comes to the question – he is the harder punching partner as Corbyn, »Bullmann told the German Press Agency.

It remains to be seen whether Starmer will be able to regain the workforce. Born in London, the son of a toolmaker and a nurse himself comes from a modest background but can look back on an impressive career as a lawyer. As a human rights lawyer, he was a co-founder of Doughty Street Chambers, for which star lawyer Amal Clooney, the wife of Hollywood actor George Clooney, also works. He later headed the Crown Prosecution Service investigative agency.

Unlike his predecessor Corbyn, Starmer himself is always flawlessly dressed and pays attention to a neat appearance. Together with a razor-sharp mind and rhetorical qualities, the married father of two children is said to have certain star qualities.

How to Increase the Interest in Sports