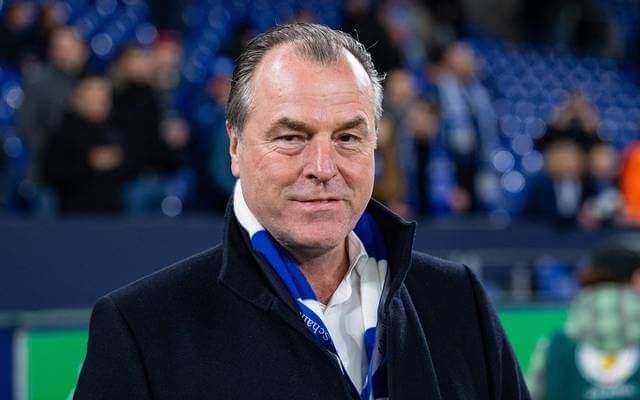 Frankfurt / Main – In its 57th season, the Bundesliga is more concerned than ever about the existence of its clubs because of the Corona crisis. Schalke’s chief executive, Clemens Tonnies, raised the alarm at the weekend.

Because of the pandemic, the 63-year-old is “very concerned about Schalke and all of football, because nobody knows exactly what scenario we can plan with”. He told “Welt am Sonntag”: “A season break would be the worst-case scenario.” A report by the specialist magazine “Kicker” caused unrest, according to which 13 of the 36 professional clubs – including four first division clubs – were threatened with bankruptcy this season.

The “kicker” does not name clubs and, in his report on the economically dramatic situation, relies on the figures that the representatives of the professional clubs were told at the video conference of the German Football League (DFL) on Tuesday. A club in the Bundesliga is said to be in acute danger. He can only meet his obligations until May. Three more clubs would have to appoint the bankruptcy trustee in June.

Sport Managing Director Frank Baumann does not see his Werder Bremen club affected by the possible bankruptcy scenarios. “I am very optimistic that we would survive a worst-case scenario like the end of the season,” said the 44-year-old on Sky. There are also clubs like FC Bayern and TSG 1899 Hoffenheim that are financially armed in the crisis.

But especially in the lower house, it looks bad according to “kicker” information: Seven clubs should then have to file for bankruptcy at the end of May if the game does not start by then and the fourth rate of the media partners is not due. Apparently, some clubs see a planned insolvency, for which the previous nine-point deduction is no longer applicable, also an opportunity to get rid of some of the legacies and reposition themselves. The Karlsruhe SC is currently considering this step.

Meanwhile, there are new possible scenarios for the game plan, and the league is trying to take a step back to normal by resuming training in small groups. The DFL explicitly pointed out that “at the current time there are neither decisions nor pre-determinations”. The «Task Force Sports Medicine / Special Game Operations» has started its work as announced in the past few days. “It is in the nature of things that there are different approaches,” it said.

The “kicker” had previously reported that the Bundesliga and 2. Liga wanted to continue their interrupted season on the first or second weekend in May, in order to then largely end the season without English weeks until June 30. The professional clubs would have agreed on that. However, the prerequisite would be that the health authorities give the green light for ghost games.

“The DFL does not claim any special role for the Bundesliga and 2. Bundesliga at a time when the containment of the virus is a top priority for society as a whole,” said the DFL.

Virologists are particularly in demand in the debate about possible ghost games because the precautionary measures represent an enormous logistical challenge. Ulf Dittmer sees problems with regular corona tests for the players. “”We are pretty close to attacking laboratory capacities in Germany,” said the head of virology at University Medicine Essen in the “Westdeutsche Allgemeine Newspaper””. “I don’t know which laboratory will then be available to test healthy Bundesliga professionals, although we urgently need these tests for seriously ill people.”

According to the Bavarian Interior Minister Joachim Herrmann (CSU), there should be no exceptions to football. “We want to do justice to sports interests,” he said at the weekend in Miesbach. «But there can be no special right for football clubs alone. Everything that football clubs do must fit into the overall events of the Federal Republic of Germany. »

According to an MDR report, the pros should be tested for a possible infection with the coronavirus every three days when the game resumes. If the result is positive, not all players on the team should be sent to quarantine, only the infected one. Alexander Kekule, Director of the Institute for Medical Microbiology at the University Hospital Halle, considers ghost games to be “purely virologically possible” from May.

“You could theoretically secure the games, that’s possible,” he said on ZDF. “Everything is possible, of course, but you always have to think about how to explain to people that football receives such special treatment.” He also renewed his assessment that there would be no more games with viewers this year.

Leipzig’s head coach Julian Nagelsmann warned in “Bild am Sonntag”: “Above all, when it comes to everyday life in the league, we must not live too much in the here and now, but have to look ahead more. There will be games with spectators again sometime, at the latest in 2021. And they will be much nicer if we are successful now.