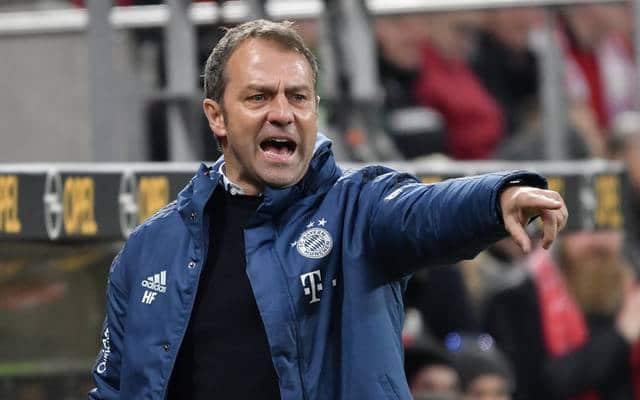 Munich – Hansi Flick is now one of the very strong men at industry leader FC Bayern. In the middle of the coronavirus crisis, the German soccer series champion fixed the rocket-like rise of the 55-year-old from assistant to permanent solution in the position of head coach.

Flick’s successful triple steps in the Bundesliga, DFB-Pokal and Champions League up to the provisional stop of the season due to the coronavirus pandemic have rewarded the Munich bosses with a contract extension – a long-term one.

The term until June 30, 2023, is a sign both internally and externally. It should “document our trust”, as Bayern boss Karl-Heinz Rummenigge said in the “Bild”. At the same time, it documents that the decision-makers agreed, because Rummenigge is known to hand over the chairmanship to Oliver Kahn at the end of 2021.

The future top boss also sees Flick as a coach who, like Udo Lattek, Ottmar Hitzfeld or Jupp Heynckes, could shape an era in Munich. The 50-year-old Kahn emphasized in the best Uli-Hoeness manner the importance of the Bavaria gene, which Flick also carries.

«Hansi was a player at Bayern, he was an assistant coach. Now he is permanently head coach. It is a good way. Hansi knows the mentality of the club, he knows that Bayern is measured by maximum success, »said the former goalkeeper and Bayern captain.

The empathic catcher Flick has catapulted himself into a strong position with a close connection to the team, clever and correct tactical and personnel measures and of course above all with 18 victories in 21 competitive matches. “We had a good run, we played successful football,” he said last.

Flick pushed personal concerns into the background. “There are more important things than my future right now,” he told the German Press Agency a week ago. Now, however, one sentence proves that Flick wanted to have his ideas about FC Bayern of the future firmly fixed in the negotiations for the head coach contract. “Together we have defined the direction for the coming years,” said Flick in the association’s message.

The trainer has clear ideas about what the Bayern team should look like in the coming years. The flick extension also leads to winners in the team such as captain Manuel Neuer, Thomas Muller or David Alaba, who are also in contract negotiations with the club.

Flick will also bring in his suggestions if FC Bayern is again concerned with transfers after the virus crisis. He is said to tend towards Leipzig Timo Werner rather than Leroy Sane from Manchester City on the offensive. Flick is also said to certify the young star Kai Havertz of Bayern format.

In addition to sports director Hasan Salihamidzic and the board members Rummenigge and Kahn, Flick will have an important say in the team planning. «Hansi has a say, that’s clear. The trainer’s opinion plays a role in our personnel decisions. He has to work with the players, ”said Rummenigge, adding:“ That’s why we wanted clarity in the coaching position before we put together the players’ squad for the next season in the next few weeks and months. ”

The bosses like what Flick did and corrected in a few months after replacing Niko Kovac as chief in November 2019. “Hansi has reintroduced the style with which we won the triple in 2013,” said Rummenigge of “Bild”. The tour also registers with benevolence that talents like the Canadian Alphonso Davies (19) or the Dutchman Joshua Zirkzee (18) are developing splendidly under flick.

The 55-year-old could now take a path similar to that of Joachim Low, whose assistant he won the 2014 World Cup title with the national team in Brazil. The 60-year-old Low also rose from assistant coach to head coach and shaped an era. Big goals are waiting for Flick, like the Champions League final in 2022 in the Munich arena – ten years after the lost “Finale dahoam” against Chelsea.

Bayern defeated Chelsea FC 3-0 just a few weeks ago under Flick’s guidance in the premier class in London. The 55-year-old hopes that if possible he will be able to reap the first fruits of his work this summer. Even the triple – which had previously only been won by coaching legend Jupp Heynckes in Germany – he considered “feasible” until the end of the season. That’s why Flick hopes that this season won’t have to be canceled. «I do believe that the game will continue. I think positively there, »said Flick.