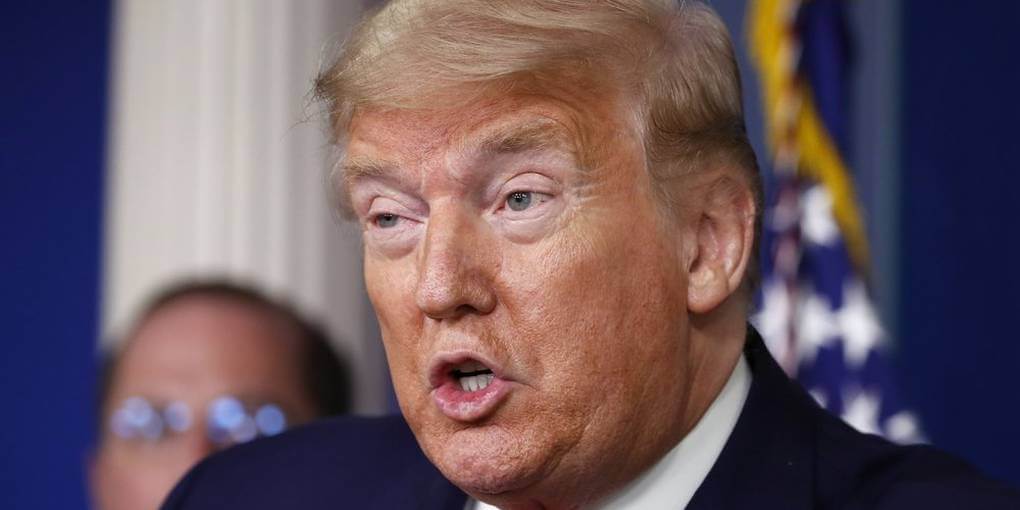 Washington – Contrary to the previous guidelines, the US government is now advising to wear face masks as a measure against the spread of the coronavirus.

“This is voluntary,” said US President Donald Trump at his daily press conference in the White House. He added: “I decided not to do it.” The recommendation applies to masks made of fabric that can be made at home, but not for medical protective masks. These should be reserved for medical staff. Trump emphasized that the new measure does not replace the previously recommended protective measures, but supplements them.

DRAMATICALLY RISING NUMBERS IN THE USA

HIGHLIGHT IS NEXT BEFORE

According to the continuously updated calculations by the IHME Institute of the University of Washington in Seattle, to which the White House has recently referred, the pandemic in the USA is expected to culminate on April 16 – with more than 2,600 deaths on that day. IHME predicts that at the height of the crisis in the middle of the month, more than 87,000 hospital beds will be missing in the United States, including nearly 20,000 in intensive care units.

Trump asked a reporter in the White House why he didn’t want to stick to the new mask measure: «Sitting in the Oval Office, behind this beautiful Resolute Desk (the desk of the President in the White House), the great Resolute Desk – I think to wear a face mask when I greet presidents, prime ministers, dictators, kings, queens, I don’t know, somehow I don’t see it for myself. I just don’t see it. Maybe I’ll change my mind. »

The US health agency CDC has so far explicitly advised healthy people without symptoms not to wear masks. Trump had already said Thursday that U.S. citizens could use homemade masks or a scarf to cover their mouths and noses. Experts fear that a recommendation to wear protective masks could trigger increased demand and thus exacerbate the lack of masks for healthcare workers.

Trump announced that the U.S. government wanted to ban the export of scarce medical protective equipment because of the spread of the coronavirus. The export of respiratory masks of the type N95, surgical gloves, and other products should be prevented. “We need these products in our country immediately,” he warned. Trump also emphasized that if certain countries, such as Spain, had major problems and placed long-term orders, he would not stop such deliveries. Spain has also been hit hard by the Corona crisis.

CRITICISM OF THE AFFECTED COMPANY

The US company 3M, which produces breathing masks, among other things, was critical of the instructions from the White House. This would have a significant humanitarian impact on certain countries. In addition, the step could result in other states also suspending the export of such products to the USA, which would be counterproductive in the current situation. Trump dismissed the company’s criticism and said he wasn’t happy with 3M.

Trump had activated a wartime law in the past few months in order to intervene more in the private sector in the face of the corona crisis. Among other things, he wants to boost the production of respirators and respirators. He had applied this law on Thursday against 3M.

The US health agency CDC has so far explicitly advised healthy people without symptoms not to wear masks. Trump had already said Thursday that U.S. citizens could use homemade masks or a scarf to cover their mouths and noses.

The US government’s chief health official, Vice Admiral Jerome Adams, wrote on Twitter at the end of February: “Seriously, people – stop buying masks!” Masks are not suitable for preventing the coronavirus from infecting a large number of people. A lack of masks endangers medical personnel. In view of the spread of the coronavirus, protective masks have also become a scarce commodity in the USA.

The east coast state of New York and the metropolis of the same name are currently worst affected by the coronavirus epidemic. Governor Andrew Cuomo again asked for more help from other parts of the country that are not yet as badly affected by the Sars-CoV-2 virus. New York is currently “the spearhead” and needs help. As soon as the situation calms down, New York will help other more affected areas, Cuomo promised. He emphasized: “Mutual help is the only solution.”