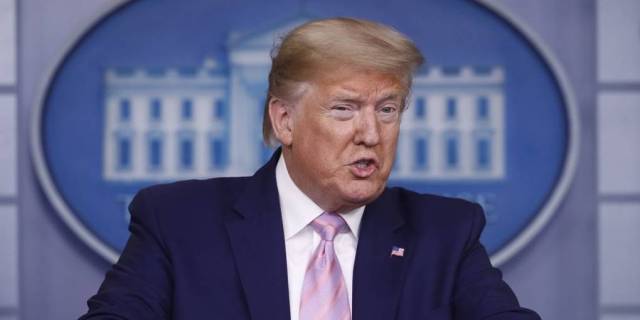 Washington – US President Donald Trump has given the United States a hard time as coronavirus epidemic casualties increase. There will be “a lot of deaths in the next two weeks, unfortunately,” Trump said on Saturday evening (local time) at the White House.

The coming and the following week would probably be the worst, Trump said. On Saturday alone, according to Johns Hopkins University, more than 1,000 people died in the United States from COVID-19 lung disease. The number of known infections exceeded the 300,000 mark – significantly more than in any other country in the world.

HOW BAD IS IT GOING TO BE?

Experts expect the number of victims to increase further over the next ten days. Trump’s adviser Deborah Birx again referred to a model calculation on Saturday, according to which this could rise to around 2,600 deaths per day by mid-April. According to the model of the IHME institute of the University of Washington in Seattle, the number of victims would increase from the current 8,300 to around 70,000 by the end of April and stabilize in the USA at around 90,000 deaths from June. To date, there have been around 65,000 deaths worldwide, including countries that have been hit hard, such as Italy and Spain.

WHY DOES THE NUMBER OF VICTIMS INCREASE?

Patients typically die two to three weeks after being infected with the Sars-CoV-2 coronavirus virus, which can cause lung disease COVID-19. Most of the youngest victims were infected before the US took extensive protective measures. In particularly affected states such as New York, Michigan, and Louisiana, significantly more deaths are expected next week, Birx said. Most countries have now imposed exit restrictions. It is therefore crucial that the number of new infections will soon decrease, said Birx. Once that’s the case, there will be light at the end of the tunnel, she said.

WHAT IS THE LOCATION IN HOTSPOT NEW YORK?

The east coast state of New York and the metropolis of the same name are currently worst affected by the coronavirus epidemic. So far there have been around 113,000 known infections and around 3,600 deaths. Governor Andrew Cuomo said they are working desperately to prepare for the upcoming climax of the epidemic. “The more time we have to improve the capacity of the system, the better,” he told journalists. He hopes that New York will soon be able to survive the epidemic thanks to the protective measures taken. “I want it all over,” he said.

WHAT DOES THIS MEAN FOR THE ECONOMY?

The extensive shutdown of public life to curb the epidemic has drastic economic consequences. In the second half of March alone, around 10 million people applied for unemployment benefits in the United States; the economy is in free fall. Trump is, therefore, pressing to loosen the protective measures as soon as possible. “We have to get the country open again,” he said. “Medicine must not be worse than the problem itself.” As soon as the country is in “full health”, people will go to restaurants, travel and visit stadiums again, Trump said.

WILL MASKS HELP THE VIRUS IN THE FIGHT?

The US CDC has so far explicitly not advised healthy people without symptoms to wear masks. Since the weekend, however, it has been said that cloth masks that cover the mouth and nose should be worn in public. This is especially true in supermarkets or in pharmacies, where it is difficult to keep enough distance from other people at all times. The recommendation, therefore, applies particularly to areas where there are already many infections. The protective effect of the now recommended improvised masks is controversial.

WILL TRUMP COME WITH A MASK?

Experts fear that a recommendation to wear protective masks could trigger increased demand and thus exacerbate the lack of masks for healthcare workers. President Trump, therefore, emphasized that the recommendation relates to fabric masks that you can make yourself at home. He has already made it clear that he does not want to follow his government’s recommendation. “This is voluntary,” he said on Friday evening (local time). “I decided not to do it.”

“Direct Selling Will Be a Key Leader in Marketing in 2022”

HFL Expands their Business into OTC Healthcare and Wellness