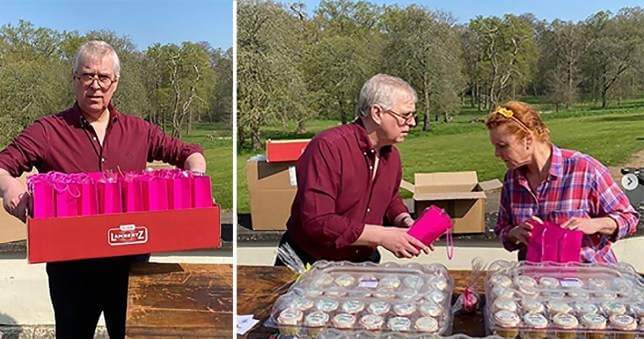 Windsor (TEH) – British Prince Andrew (60), who was criticized for his involvement in the Epstein scandal, has long been in public again this week, with several photos showing Queen Elizabeth II’s second-oldest son at Wrapping gift bags with his 60-year-old ex-wife Sarah Ferguson (Fergie). The pictures were previously posted on Instagram by Fergie’s assistant, Antonia Marshall. Andrew can be seen wearing a purple shirt packing cupcakes and other items into gift bags. The care packages are intended for the hospice in Windsor, Marshall wrote. “The York family is a wonderful and constant unit and is constantly helping others in this crisis.”

Instagram users commented on the campaign differently. Some praised Andrew for the good deed. Others have accused him of using the corona crisis to polish up his battered image, and Andrew has been criticized for his friendship with the now-deceased multimillionaire Jeffrey Epstein for months. The US businessman had abused dozens of underage girls for years and forced prostitution. He committed suicide in a New York prison cell last summer. Andrew was an overnight guest at Epstein’s property in the United States and the Caribbean. He doesn’t want to have heard of his friend’s machinations.

One of the victims, Virginia Giuffre, accuses the prince of having abused her several times, and after an unsuccessful interview last November with which he was actually trying to restore his reputation, Andrew decided to put an end to his duties as a member of the royal family for the time being. Since then, he has rarely appeared in public. At the time, he had said that he wanted to help all the relevant investigative authorities, should this be necessary. However, the FBI has repeatedly accused the prince of not cooperating, Antonia Marshall’s Instagram account