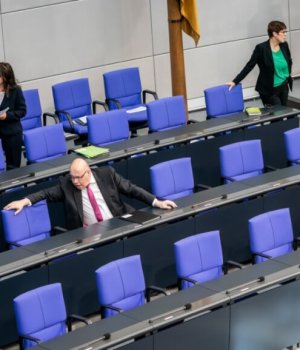 The Bundestag is still in the Easter break. But the next week of the session begins on April 20. This raises the question of how many MPs will come to Berlin despite the Corona crisis. One in four parliamentarians stayed at home in the last week of the session. And if the agenda had not included a vote to relax the debt brake to finance Corona aid, which required the chancellor majority, there would have been more.

President of the Bundestag Wolfgang Schauble has therefore been concerned about the ability of Parliament to work for weeks. In a note from the Federal Ministry of the Interior, the Bundestag was already recommended in mid-March to allow “meetings and votes to be held online” in exceptional cases. Personal presence in the plenary hall would then no longer be necessary. But is it that easy? Is this compatible with the Basic Law?

Bundestag President Schauble has already sent a letter to all parliamentary group leaders with a “drafting” of his experts on these questions. “Against the background of the risk of contagion with the coronavirus, which is currently classified as high, we asked to check whether sessions of the Bundestag could also be carried out virtually by video and audio transmission following the applicable constitutional law,” it said in the introduction to the report. “Possibilities for a corresponding constitutional change should also be shown”.

Then the “current legal situation according to the Basic Law” is outlined in the report. “The wording of the central provisions of the Basic Law, which are central to the Bundestag, indicates the need for the physical presence of members and other participants at the meeting and in meetings of the Bundestag,” the authors write. They refer to several articles of the constitution. Thus, in Article 39 paragraphs 1 and 2 of Gathering of the Bundestag. Paragraph 3 regulates the start, end, and convocation of his Meetings. The Bundestag also negotiated publicly following Article 42 paragraph 1 of the Basic Law. Besides, the Parliament may under Article 43 paragraph 1 presence require any member of the federal government. And Article 43 paragraph 2 guarantees the members of the Federal Government and the Federal Council to everyone Meetings of the Bundestag admission.

“The commentary on the Basic Law” has so far “been unanimously based on a physical presence of the members of parliament at the meeting of the Bundestag and its meetings”, says the draft sent by Schauble to the group leaders. This is also “considered by the prevailing opinion” concerning the right to speak and the vote of the deputies as necessary “. The voting deputy had to “be present at all votes in the plenary room because of the general requirement of the publicity of the votes”.

“In the literature, it is said that a purely virtual presence lags behind the communication options when present and is therefore out of the question for the parliament anyway,” the authors write. The rules of procedure of the Bundestag also “traditionally assume that deputies are present in the plenary hall”. For example, according to paragraph 34 of the Rules of Procedure, the speakers would speak from the hall microphones or the lectern.

The opinion concludes that “the introduction of new ways of holding the Bundestag meetings” affects in particular “the principle of publicity as an essential element of democratic parliamentarian and the principle of representative democracy”. Assuming their observance, “the following addition to Article 39.3 of the Basic Law could be considered:

Sentence 1: The Bundestag determines the end, the restart and the type of implementation of his meetings.

Sentence 2: The President of the Bundestag can convene him earlier and exceptionally determine how the session is conducted. “

As a result of the italic changes to the previous Basic Law text and adjustments to the rules of procedure of the Bundestag, virtual Bundestag meetings “in the way of simultaneous image and sound transmission” would also be possible in exceptional cases, the report says.

So much for the legal handout. But what happens in practice now? In his letter to the group leaders, Bundestag President Schauble offered to “discuss in depth the possibility of virtual plenary meetings” with them. The letter is on April 2. So far, however, interest has been pretty weak.

The political groups do not want to frantically change the constitution during an ongoing crisis. Even the otherwise demonstratively digital FDP is now reluctant. Two years ago, the first parliamentary director of the FDP parliamentary group, Marco Buschmann, demanded, for example, that the Bundestag introduce electronic voting. “Card readers should be installed at every seat in the plenum for this purpose, and MPs can then take part in the vote using an electronic voting card,” Buschmann had suggested at the time. Now he says that his parliamentary group is “independent of Corona for modern and digital ways of working in the Bundestag”. But the Basic Law should not be rushed to change, “in the stress of the crisis, the risk of errors in weighing up and volatility is too great”.

So far, the six parliamentary groups in the corona crisis have therefore only agreed on minor adjustments for which only the rules of procedure of the Bundestag, but not the Basic Law, need to be changed. In the future, members of Bundestag committees will also be able to take part in committee meetings “via electronic means of communication” – video and telephone conferences are now also possible there. This special regulation due to the Corona crisis should only remain in force until the end of September.

Besides, the quorum for the quorum of the Bundestag was also reduced for a limited period from 50 to 25 percent of the members. This “takes into account the fact that a larger number of MPs may not be able to travel to the seat of the Bundestag due to protective measures (because of the Corona crisis),” the reasoning says.

The political groups believe that this is enough to keep Parliament working. Besides, the first successes are already showing in the containment of the coronavirus – there is already discussion about when some of the measures can be relaxed again.

However, there is already a major change due to the corona crisis in the Bundestag: most of the political groups have now held virtual parliamentary group meetings for the first time.