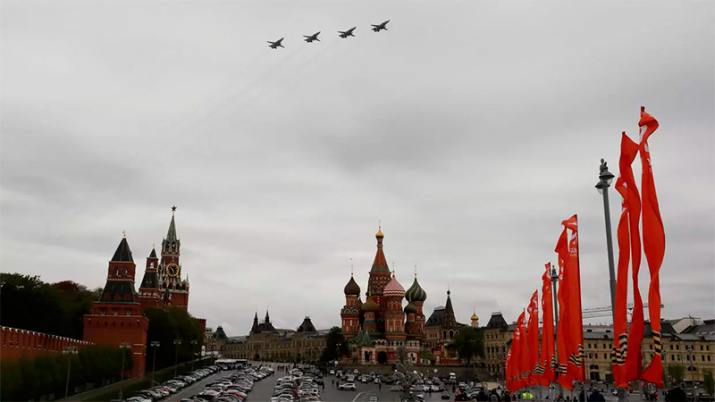 Russia celebrated the 75th anniversary of its victory over Nazi Germany in World War II without veterans on the streets and without tanks on Red Square due to the coronavirus pandemic, which prevented the attendance of major world leaders at a party with the one that the Kremlin wanted to start the thaw with the West.

“They did so much for our homeland that it cannot be measured or paid for. They saved our homeland and the lives of future generations, liberated Europe and defended the world, rebuilt cities, and towns, accomplished great feats,” said President Vladimir Putin addressing veterans from the Alexander Gardens, in front of the Kremlin walls.

Accustomed to the grandiose military parade on the cobblestone of the most important square in the country, the Russians had to settle for today with a short speech by Putin, who paid tribute to those killed in the war, 27 million Soviets, of whom eight million They were soldiers, reported the EFE news agency.

The image of a Putin alone, depositing a bouquet of flowers in front of the eternal flame of the Tomb of the Unknown Soldier and keeping a minute of silence, summed up a day lacking in the confinement of the 146 million Russians.

What should have been a party with the veterans in the stands on both sides of Lenin’s Mausoleum, receiving bouquets of flowers at their homes or in the main parks of the city, turned into a sad day with the streets empty and without the loudspeakers will entertain the passers-by with patriotic songs?

For the first time since 1995, Moscow was not the scene of a military parade, which usually includes the deployment of more than 10,000 soldiers, tanks, anti-missile batteries, and intercontinental rockets.

Even Putin’s call for unity – “We know and strongly believe that we are invincible when we are together” – did not lift the spirits of the Russians, especially in Moscow, where the 100,000 cases of Covid-19 were surpassed today after the Municipality will prolong the confinement until May 31.

The only thing that the coronavirus could not avoid is the flight of the planes and helicopters, which flew over the center of Moscow.

Putin had planned to invite the world’s top leaders to the anniversary, including the American Donald Trump and the Chinese Xi Jinping, and representatives of the countries of the European Union (EU) and the defeated powers, Germany and Japan.

It also aimed to open a new stage in its relations with the West with an appeal to lift international sanctions, stop reviewing the history of World War II and start from scratch.

Now, the Western powers seem unwilling to withdraw the sanctions in force since the annexation of the Ukrainian Crimean peninsula in 2014, and calls by the Kremlin to hold a meeting between the five permanent members of the UN Security Council to forge a New world consensus have so far fallen into a vacuum.

The same is true of the nuclear disarmament negotiations with the United States, as Trump insisted this week in a telephone conversation with Putin that the renewal of the New Start requires the incorporation of China.

In addition, it is also not certain that Western leaders will now accept the invitation to the meeting that will be held quite possibly in early September, coinciding with Japan’s capitulation.

Putin, who again this week called on the West to condemn the 1938 Munich Accords with which France and the United Kingdom attempted to appease Adolf Hitler, will have to wait for the end of the pandemic to normalize relations with the West.