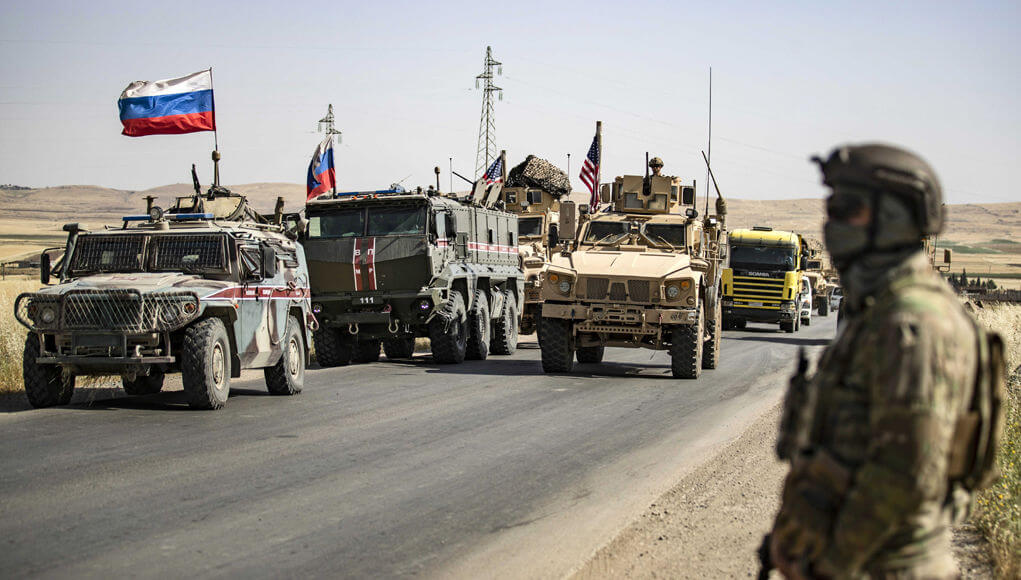 An American patrol intercepted a Russian armored vehicle that had entered the coalition areas in Syria without coordination or prior notice.

A video clip has been released of American armored vehicles surrounding the Russian armored vehicle and hindering its advancement in the vicinity of the Al-Qahtaniyah region, northeast of Hasaka, Syria.

This is not the first time that American patrols have intercepted Russian patrols that are trying to penetrate the areas controlled by the coalition forces, and the areas where American forces are still in the Qamishli and Hasaka regions.

At the end of last January, an American patrol had intercepted a convoy of Russian military vehicles that tried to enter areas east of Qamishli, where American armored vehicles stopped the Russian convoy and forced them to return from the international road.

According to local sources with The Eastern Herald, the Russian patrols are always trying to penetrate the areas of the American forces’ points, so that they send reconnaissance units before they pass from any road, while the American patrols prevent them from entering their areas, especially those that reach border crossings through Hasaka.

American forces have been present in Syria since 2014, as part of the international coalition in support of the Kurds in the face of the Islamic State(ISIS). In October, US President Donald Trump announced the withdrawal of all his forces, and then at the end of the same month, he kept a force of 500 soldiers to protect oil wells in northeastern Syria.

Moscow, which has deployed its forces in Syria since 2015 in support of Damascus, took advantage of the agreement to enter the Kurdish spheres of influence. And they are in contact with the American forces to overlap their areas of deployment, leading to frictions, which analysts fear will develop into greater tensions, according to Agence France-Presse.

And Syria is the only country where Russian and American forces have been in a narrow geographical area for decades.