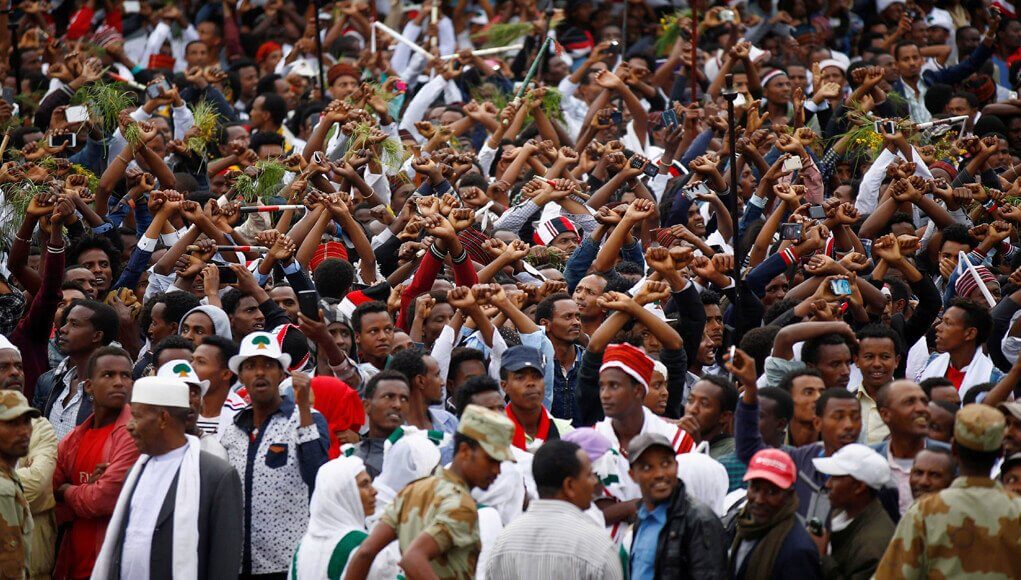 The Ethiopian authorities are preparing to face a second wave of violence, after two days of continuous protests after the killing of a famous opposition musician, Hackalo Hondisa, this weekend.

As of Thursday, up to 88 people had been killed during the protests that followed the killing of the Ethiopian singer at his home in the city of Ambo, which is 110 km from the capital, Addis Ababa, reports The Eastern Herald.

A bomb explosion Thursday morning during the singer’s funeral, killed eight people, amid clashes between demonstrators, security forces and armed gangs, according to a report by the British newspaper “The Guardian“.

The Ethiopian army had spread throughout Addis Ababa on Wednesday after armed groups began to roam the city’s districts for the second day in a row.

The killing of Hacalo sparked protests against the years-old injustice against the Oromo, the largest ethnic group in Ethiopia, who complain of political enslavement from political power.

East African analyst at the Chatham House Center in London, Ahmed Suleiman, told the Guardian, “Hakalo represents the Oromo struggle over the past years, and there has been tremendous anger that pushed people to take to the street.”

Suleiman added, “There are continuous protests accompanied by some chaos, and live bullets were fired, and the matter developed very quickly.”

Wednesday’s shooting was heard in several Addis Ababa neighborhoods, as gangs roamed the capital with machetes and sticks.

Witnesses said that there are those who incite Oromo youth against other ethnic groups and the police. At least one policeman was killed during the clashes.

A resident of Addis Ababa told the Guardian, “We had a meeting with the people, and we were told to arm ourselves with anything, including machetes and sticks. We no longer trust the police to protect us, and we have to prepare.”

Professor Oulu Alu, from the University of Keel in the United Kingdom, said the dispute over the burial of Hackalo in Ambo or Addis Ababa had revealed the political tensions underlying the protests.

Alo explained that the capital is under federal, not regional control. “Oromo claim that Addis Ababa is their city because it is entirely within the regional Oromo State.

Local media said that Hackalo’s father had criticized the efforts of some activists and politicians to bury his son’s body in the capital, by requesting that he be buried in the city of Ambo.

Ethiopia witnessed bloody protests in 2018 over the dispute over the dependency of Addis Ababa, which led to the resignation of the former Prime Minister and the appointment of the current Prime Minister Abi Hamad.

The new turmoil could hinder Abi Ahmed’s efforts to change Ethiopia’s political and economic system, according to a report by the British newspaper, The Guardian.

Abi Ahmed, who belongs to Oromo, was praised by many for his political reforms, which led to radical changes that eased government repression.

These internal disturbances coincide with intense negotiations between Ethiopia, Egypt, and Sudan regarding the Ethiopian Renaissance Dam, which Cairo and Khartoum both fear will reduce their share of the Nile waters.

Triple negotiations over the dam’s operation and management resumed earlier in June, and they have stumbled over the dam’s work during droughts, and about mechanisms for resolving potential disputes.

Ethiopia says the electricity expected to be generated from the Renaissance Dam is vital to pushing for development projects in the impoverished country of more than 100 million people.

However, Egypt says that the dam threatens the flow of the Nile waters, most of which originate from the Blue Nile where the dam was built, and its repercussions may be devastating to its economy, water, and food resources. Egypt derives 97 percent of its water from the Nile.