Was there life on Mars? This is the question that the Perseverance rover will try to answer, which NASA launched this Thursday towards the red planet to look for traces of microbes that may have populated the place more than 3,000 million years ago. The vehicle carries a mini-helicopter that attempts to make the first flight of a device on another planet.

The launch, which was carried out with an Atlas V rocket from the United Launch Alliance, took place at 07.50 (11.50 GMT) in Cape Canaveral, Florida.

“This is the first time in history that we will go to Mars with the explicit mission of finding life in another world,” Jim Bridenstine, administrator of the space agency, said at a press conference Wednesday.

“Are we going to be able to find it? We don’t know if life existed there, but we do know that Mars at some point in its history was habitable,” he added.

If it reaches the red planet intact on February 18, 2021, Perseverance will be the fifth rover to make the trip since 1997. They were all Americans so far, but China launched its first Martian rover last week, which is slated to land in May 2021.

Mars could have three active rovers next year, with the American Curiosity, which has traveled 23 km on the planet since 2012.

How is the Perseverance rover

The new rover, built at NASA’s legendary Jet Propulsion Laboratory in the California city of Pasadena, is an improved version of Curiosity: its six wheels are stronger, faster, smarter, and can self-pilot 200 meters every day.

The vehicle is three meters long, weighs a ton, has 19 cameras, two microphones – a novelty – and a two-meter robotic arm. A plutonium generator will charge your batteries.

Once on Mars, NASA will attempt to launch the 1.8-kilo Ingenuity helicopter into the Martian air, dense as 1% of Earth’s atmosphere. The objective is to demonstrate that it is possible.

NASA is very interested in aerial exploration, as rovers can only travel a few tens of kilometers in their entire useful life and are vulnerable to dunes and other reliefs, although Perseverance will be able to climb obstacles 40 cm high.

The main mission of the NASA robot will be to look for traces of past life. Scientists believe they have evidence that more than 3 billion years ago, Mars was warmer and covered with rivers and lakes, ingredients that gave birth to microbes on Earth. Later, the red planet became cold and dry, for reasons that astronomers still do not know.

Perseverance will also collect thirty tube rock samples, which a future joint mission of the United States and Europe will retrieve and bring to Earth no earlier than 2031. 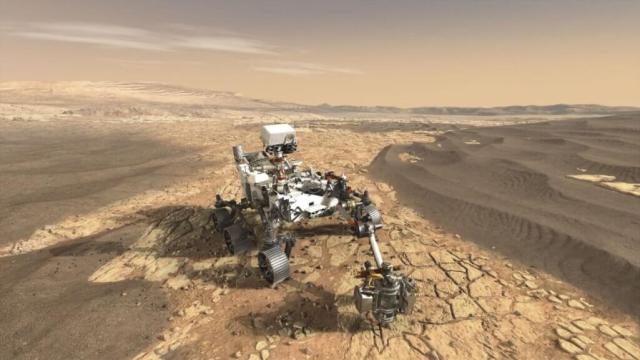 “The indisputable proof of past life on Mars, if indeed there was, will probably not be confirmed before analysis of those samples in the next decade,” said Thomas Zurbuchen, NASA’s chief scientist, on Tuesday.

“We are surely looking for a very primitive life form, not advanced forms like skeletons or fern fossils,” said Ken Farley, a project scientist at Caltech University.

NASA plans to land Perseverance in the Jezero crater, formed some 3.8 billion years ago, and more precisely in a delta-like location.

More than 350 geologists, geochemists, astrobiologists, atmospheric experts and other scientists from around the world are participating in the mission, which will last for at least two years, and surely much longer, given the great resistance of previous rovers.