Actress Stephanie Saliba appeared in a special report for the Et Arabic program from inside her home on the 18th floor near Beirut Port. Stephanie appeared inside her completely demolished house, where the effects of the destruction were very clear, and indicated that she was still shocked by what had happened, but she praised her Lord for not being comparable to the conditions of the injured or those who lost loved ones.

Stephanie described what had happened as a great tragedy and revealed that the workers who were building the house left two hours before the explosion.

Stephanie revealed that she survived as she was going to inspect her house and carry out what the workers had done, but divine power caused her to postpone the visit.

Armenian militia reveals the unsightly underside of the Karabakh war 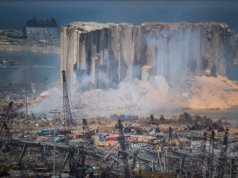