In a message to US President Donald Trump, Salami announced that Iran’s revenge for the general’s “martyrdom” would be “obvious, serious and real”.

The commander of the Iranian Revolutionary Guard, Hossein Salami, today threatened revenge on all those involved in the liquidation of Iranian General Qasim Suleimani.

As it was published on the website of the Revolutionary Guard, Salami, in a message to US President Donald Trump, announced that Iran’s revenge for the “martyrdom” of the general would be “obvious, serious and real”.

The agency reminds that Trump threatened this week that the United States will severely respond to any attempt by Iran to take revenge for Suleimani’s death, emphasizing that Washington will retaliate “a thousand times stronger”.

Earlier, there was a report according to which Iran planned the assassination of the American ambassador to South Africa, Lana Marks, but Salami rejected that claim.

> Do you think that we will retaliate for the martyrdom of our brother by hitting the ambassador who is a woman? We will strike at those who had a direct and indirect role. You should know that everyone who had a role in that event will be hit, and this is a serious message, Salami pointed out in a message to Trump. 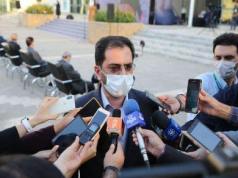