The Turkish Defense Ministry denies information about the use of Turkish aircraft and drones in the battles in Nagorno-Karabakh against the Armenian forces, the Anadolu state agency reports.

“There is no evidence that Turkey used aircraft and drones against the Armenian army,” the Turkish military said after the Armenian Defense Ministry reported on Turkish F-16 fighters in Karabakh the day before. 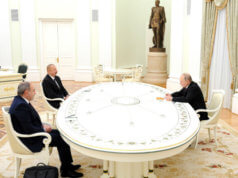 “I want to express my satisfaction”: Putin made a statement on Karabakh