Amnesty denounced that Azerbaijan used banned bombs in the conflict.

The delirious words of the mayor of Baku until 2019 and vice prime minister of Azerbaijan until 2019, Hajibala Abutalibov, in front of a German delegation in Bavaria in 2005, they were not a specific rant by someone senile, but the declaration of intentions of someone who remained in politics more than a decade later, protected by a system that does not hesitate to make heroes out of criminals like Ramil Safarov. This, after beheading with an ax in the middle of an English course at the NATO in Budapest to an Armenian lieutenant Gurgen Margaryan, 25 years) and being sentenced to life imprisonment by a Hungarian court, he was pardoned by the Azeri president, Ilham Aliyev, in 2012, promoted to the rank of major, nominated for the title of ‘Hero of Azerbaijan‘ and the State gave him an apartment and the salary proportional to the eight years he spent in prison in Hungary.

And it is that the Azeri president, Ilham Aliyev, although it is more subtle than Abutalibov, does not hide his fanaticism by making claims, filled with pride, such as that “(his) greatest enemies are the Armenians of the world.” Ensuring that “Armenia as a country it has no value. “But in the Azeri case, everything is allowed. The language of hate, the bombardments with drones on civilians, the extermination of an entire ethnonational community as a target are allowed because Baku it’s on ‘the right side of the story’. Why Baku is on the side of the ‘good guys’, with Israel as a supplier, NATO as a friend, and Europe as a gas and oil customer.

The international position in the conflict of Upper Karabakh is that of hypocrisy. The pseudo-humanitarian speeches of world leaders have proven to be a dirty lie. The statements, the crocodile tears, the market sentiment of European and American leaders to pressure, depose, or kill presidents, warlords, or dictators they do not like, vanish before characters like Aliyev; whose family holds power in Azerbaijan practically since its independence. A clan that always monopolized power in the country, since the time of the Soviet Union, when Heydar Aliyev managed to climb positions within the KGB and from CPSU becoming for years 50-60 in the most powerful man of his republic.

The authoritarianism and nepotism of the Aliyev clan, regardless of the opinions of each one about this type of model of State, in Europe like – or at least not uncomfortable – while sanctioning the Syria of Bashar al Assad or the environment of Lukashenko in Belarus. Just as cluster bombs don’t matter about Stepanakert, the capital of Artsakh. Nor does it matter that journalists, critics, members of opposition parties are arrested … among which the anti-corruption blogger stands out. Mehman Huseynov, who has spent more than two years in prison for the sole crime of defamation (a questionable charge, on the other hand). While each movement of the body is followed almost surgically, Navalny in Russia, it doesn’t seem to matter that the Azeri government has blocked social networks and prevented the foreign press from entering to control the entire account of the almost two weeks they have been attacking the Republic of Artsakh.

And it is that while the EU imposes sanctions on officials of Belarus “for its implications in the repression of the democratic opposition”, Aliyev he proposes to carry out an offensive against the opposition in his country without anyone seeming to care. And it is important to add that the Azerbaijani president is not only a loudmouth with out of tone in his speeches, but that he complies with his threats. And it is that three days after proposing the offensive against the opposition, the leader of the same, Yagublu Tofig, was sentenced to more than four years in prison for the crime of hooliganism. With a government that treats a politician that has shed his blood fighting for Azerbaijan in the war of Nagorno-Karabakh, which has been proposed twice for the title of National hero, it is easy to imagine the type of policies that are had against an ethnic-national community that seeks to exterminate or, in the best of cases, expel from the Upper Karabakh; a historically Armenian territory.

After a century of violence, pogroms, and heinous crimes, there are no good or bad in Nagorno-Karabakh. However, in recent years Azerbaijan is the country that always reactivates hostilities, that launches offensives against Artsakh, which exalts hatred with speeches of extermination. Is Azerbaijan who celebrates sending thousands to die and kill for a piece of land that, although history made it the last defensive line of Armenia, for Baku it means nothing … unless you want to keep moving forward until Yerevan. And what is truly alarming is that Azerbaijan acts like this because Baku are known with impunity, with the support of the International community. It is very easy to appeal to dialogue to solve problems, but it is like saying nothing when one of the parties is given the green light to talk about ethnic cleansing as in Europe from the 40s. 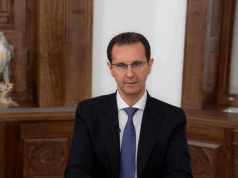