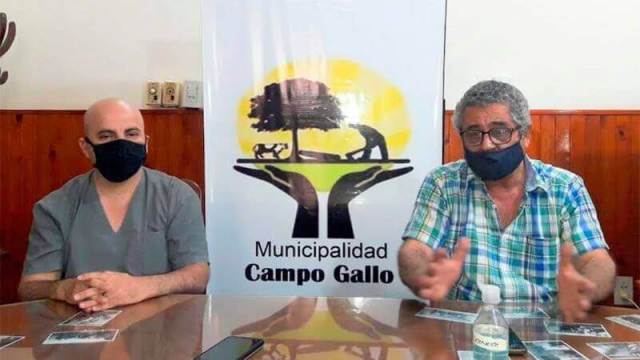 The mayor of Campo Gallo, Jose Vittar, announced the reduction of the hours of circulation and commercial activities, from 7 to 22, as of this Tuesday, October 13. The measure was taken “due to a certain social relaxation and with the aim of reducing the risk of contagion”, but also announced that joint controls with the province’s Police will be reinforced to avoid the presence in the streets of people without due justification outside the hours allowed.

The announcement was made this Monday, at a press conference offered together with the director of the Zonal Hospital, Dr. Jose Gomez, who also explained the situation of two newly infected with Covid 19 in the city, a man and his newborn son, Those who are isolated at home and were detected as soon as they arrived in Campo Gallo from a private health center in the Capital, thanks to the rapid tests that the municipality had recently acquired

Precisely, the professional highlighted the importance of the immediate detection of new cases from tests that were also carried out on the mother. Faced with a positive result in the first test, they were swabbed and the samples were sent to the Capital for analysis, the results of which were released on Sunday night.

“We want to calm down the residents of Campo Gallo because they were quickly detected, thanks to the tests. They are people who were immediately isolated and who have not had the opportunity to infect anyone,” Vittar remarked.

For his part, Gomez said that before the confirmation of the disease in the father and the baby, he contacted the primary pediatrician and the head of neonatology at the private health center to coordinate actions. Both are clinically compensated and will be evaluated daily by telephone; only if necessary will they be transferred to a more complex center.

As for quarantine, the mayor made a special request. “We want the neighbors to do their part because with this disease we cannot relax as we are seeing in many towns in the province. We don’t want to get to that situation. So far we have been doing well so I ask that we take care of each other, “he said.

In another section of the press conference, he was firm in announcing that as of this Tuesday there will be no contemplations with the offenders. “We are going to start closing businesses that do not respect schedules and people who circulate outside of the allowed hours will be arrested. Let’s avoid those bad moments, let’s collaborate to avoid contagion ”, he insisted.

He explained that this measure responds to a certain relaxation that could be seen during the weekend. “I spoke with the police authorities and we decided to reinforce the controls because until now we have been one of the most flexible municipalities to cope with the quarantine, but we cannot neglect ourselves. That is why I ask you for greater responsibility, especially from people who have the Circulando permit and who can enter and leave the city. But also to local merchants, who respect the hours until 22, and until 24 with delivery”.