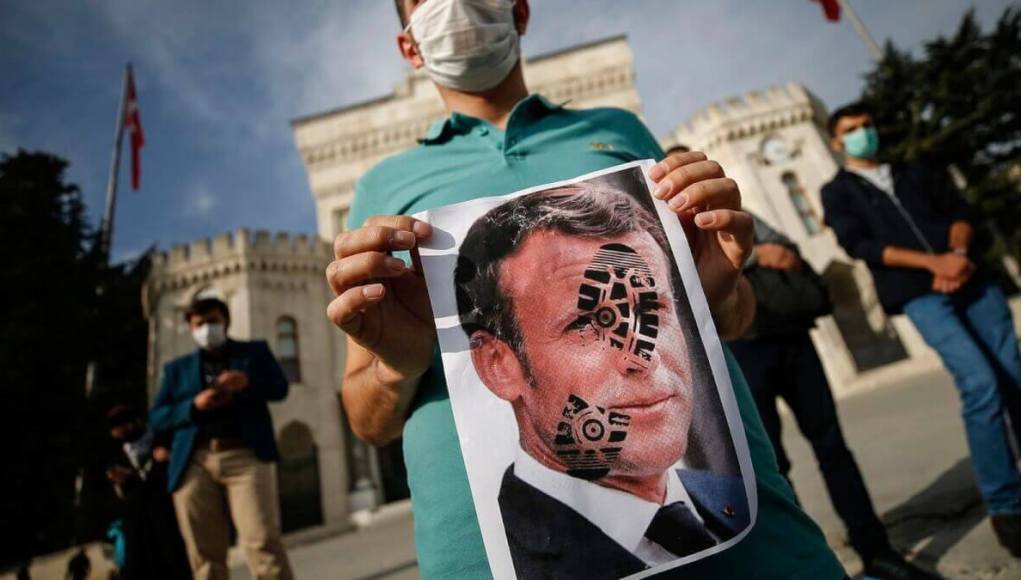 French authorities have recalled their ambassador to Turkey over remarks by Turkish President Recep Tayyip Erdogan that French President Emmanuel Macron said he was “mentally ill“. Erdogan has sharply criticized Macron in recent days, accusing him of anti-Muslim hatred.

French products are now circumvented in many Arab countries and the French have been widely criticized by Muslims for Macron’s response to the brutal killing of teachers on the outskirts of Paris.

Samuel Paty was assassinated for showing disrespectful caricatures of the Prophet Muhammad to the students in his school. An 18-year-old boy of Chechen descent murdered Paty and beheaded him. The killer was not a student at Paty’s school.

The French ambassador to Pakistan was summoned to the carpet by Imran Khan, the country’s prime minister, this morning. At a meeting between Khan and the ambassador, Prime Minister Macron accused him of “attacking Islam“.

Separation of state and church, French secularism, and religious neutrality is one of the cornerstones of France, and has these values, which in French is called “laicité”, has long been instilled in France through schooling. However, teachers have found it much more difficult in recent years.

Earlier this month, President Emmanuel Macron unveiled his government’s plan to deal with radical Islamic in the country. He said it was intended to combat “separatist forces” and protect French Muslims from outside influence.

The plan includes, among other things, increased supervision of schools and budgets for houses of worship. The aim is to reduce the influence of foreigners, such as Turks, in mosques in France.

This has been criticized and Macron has been accused of wanting to suppress the Muslim faith. The plan is also said to run the risk of justifying prejudice against Muslims.

Paty’s assassination seems to have given this plan both wings. The France24 news says that the discussion about French secularism has increased significantly.

We will not give in, ever.
We respect all differences in a spirit of peace. We do not accept hate speech and defend reasonable debate. We will always be on the side of human dignity and universal values.

In a speech in Turkey over the weekend, Erdogan hinted that Macron was mentally ill and said the French president was with his brain.

He needs some kind of mental health treatment. What else can be said about a national leader who does not believe in religious freedom and behaves in this way against millions of people of other faiths who live in his own country?

The French presidency has sharply criticized the remarks, demanding that Erdogan reduce his propaganda.

It is worth noting that France and Turkey are now at loggerheads on a number of issues, including the conflict in Libya, Syria and Nagorno-Karabakh, and that France has backed Greece in its conflict with Turkey.