Home Health It is estimated that 70,000 could die in the coming months in... Rapid growth in the coronavirus epidemic in the United States could lead to an additional eight million confirmed infections and 70,000 deaths over the next two months, according to the calculations by Reuters news agency. The only way to prevent this would be if the authorities in the country changed their policy and tightened measures considerably.

The experts interviewed by the news agency agree. It is necessary to coordinate actions at the national level and get more involvement from the government of US President Donald Trump, or that the states themselves decide to take tougher action to counter the spread of the virus.

If the calculations are successful, it means that the number of infections will increase by 80 percent and deaths by 29 percent.

The calculations are conducive to assessing the progress of the epidemic leading up to the inauguration of Joe Biden, who won the Western presidential election. He himself has said that he intends to place too much emphasis on ending the epidemic, and he strongly criticized the inaction of the current US president.

On Thursday, more than 152,000 Americans were diagnosed with the virus, a record number of new diagnoses. It was also the seventh day of the last nine where a record was set for the number of infected people diagnosed in one day. That record was broken again yesterday when 170,333 were diagnosed.

There have never been more hospital admissions due to the coronavirus.

Experts fear that the winter and cooling weather will make the epidemic more difficult to deal with and have a greater impact on people’s daily lives.

“The epidemic will be worse than it was this spring and worse than it was for the average American,” said Gregg Gonsalves, a professor of epidemiology at Yale University in the United States. He says Donald Trump and the government can do much better.

“We may be finding out how we can support people to stay at home rather than come to work. We could pay them to stay at home, we could send masks to every home. ”

US President Donald Trump is said to have stopped interfering in the government’s response to the epidemic following the defeat in the presidential election. His advisers have said he shows little interest in the epidemic despite a record number of new infections and the fact that hospital intensive care units are filling up in many places.

A group infection is raging for the second time in the White House itself and among Trump Trump’s close advisers. At least five people present at the presidential election vigil have been diagnosed with coronavirus disease, but hundreds of people gathered during the election vigil and many were unmasked.

The good news about the development of the vaccine is also said to have gone in the opposite direction to the president. He accused drugmaker Pfizer of deliberately delaying announcing progress until after election day in a conspiracy against him.

Public health experts fear that the epidemic will only get worse and limit the authorities’ ability to spread the vaccine quickly if Trump refuses to take decisive action or work with Biden’s preparatory team. 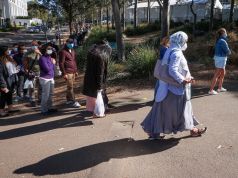