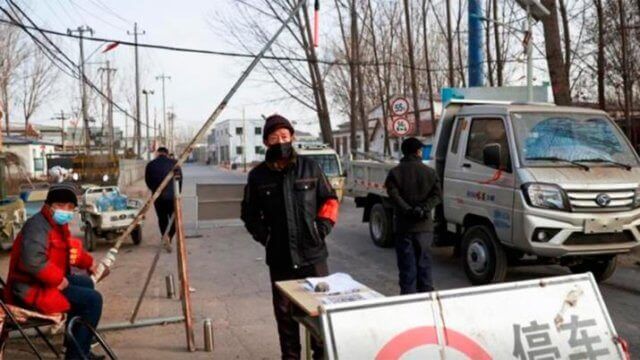 “All family reunions must be canceled, all marriages postponed and funerals simplified until the epidemic situation has subsided,” the local government said in a statement.

Given the alert generated by the possibility of a national outbreak of Covid-19, the Government ordered the 4.9 million residents to be tested in two days.

Last week, authorities had launched a mass testing campaign and closed roads, schools, and shops in the neighboring city of Shijiazhuang, the epicenter of the latest outbreak, leaving its 11 million residents to undergo two rounds of tests.

Meanwhile, neighboring Xingtai, with a population of 7 million people, was also cut off last Friday.

Suihua City, in Heilongjiang Province and home to more than 5.2 million citizens, was closed on Monday after the city reported 46 cases, 45 of which were asymptomatic.

Shanxi Province has also restricted internal travel and implemented massive tests, after a patient from neighboring Hebei Province was reported to have traveled there.

A steady trickle of new coronavirus cases has emerged in the northern provinces of China since October, prompting strict restrictions even though the number of infections is small compared to outbreaks in many other countries.

The restrictions come before February’s Lunar New Year when hundreds of millions cross China to visit family and friends, and authorities are eager to contain the spread of the virus before the annual mass migration.

Covid-19 emerged in China at the end of 2019 and from there it spread throughout the world, for which the World Health Organization (WHO) declared the coronavirus pandemic in March 2020.

A year ago Wuhan announced its confinement, the world never expected the coronavirus

All passengers flying to the US must be tested and quarantined