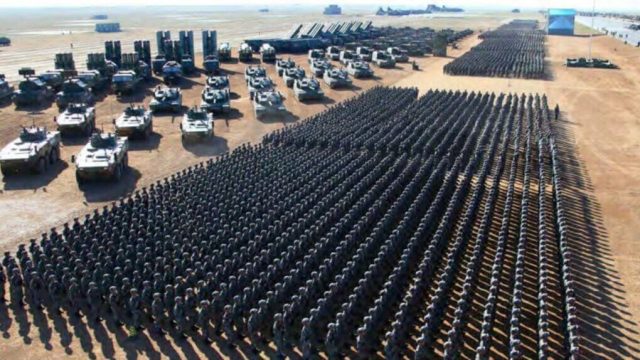 Every year since 2006, Global Firepower publishes its annual report and ranking list of national armed forces, from the strongest to the weakest. This year’s ranking of the military strength of the countries was published last month, and the data are interesting.

Global Firepower has calculated a specific “Power Index” for each of the 139 countries on the ranking, an index calculated based on more than 50 factors that include not only strict military power but also the financial situation, logistical capacity, and geographical conditions, among others.

The USA in the first place

As expected, the U.S. is still in the first place, with a Power Index of 0.0718 (the closer the index is to zero, the higher the military power). It is interesting, however, how little second-placed Russia actually lags behind America. Russia’s Power Index is 0.0791. This difference, however, is constant compared to previous years.

The United States has successfully met the criteria of a modern military force with its gigantic, albeit partially inflated military budget, extensive infrastructure, huge manpower in the military, navy, aviation and marines, and a large pool of potential recruits, writes the American newspaper National Interest.

But Russia’s fifth-generation invisible fighter Su-57 is a very concrete deterrent to possible US air action, while the US still has serious problems with its (too) expensive fifth-generation invisible fighter F-35, for which US Air Force Chief General Charles Brown indirectly acknowledged that it was a failed project and that it would be necessary to develop a new, cheaper fighter to replace the obsolete F-16, fourth-generation fighters. The F-35 has highly sophisticated sensors and weapons, but costs about $ 100 million apiece, is prone to breakdowns, and unreliable. Moreover, in 2018, the entire U.S. F-35 fleet was grounded due to the crash of one such fighter in South Carolina.

However, the United States, which has more than twice the population of the Russian Federation, does not have nearly as much advantage in the total number of active members of the armed forces – 1.4 million compared to one million Russians. Russia has an advantage in terms of the number of reservists – 2 million compared to only 845 thousand Americans. Russia also has half a million paramilitary forces, and the United States zero, although this record does not count private subcontractors, or mercenaries from companies like the controversial Blackwater, who often work alongside American soldiers in military conflicts.

Furthermore, Russia still has a great advantage in the number of tanks – 13 thousand compared to 6100 American. In the total number of armored vehicles, the USA is still better, with 40 thousand compared to 27,100 Russian ones. Although Russia has a higher total number of warships – 603 versus 490 American, the United States has as many as 11 aircraft carriers, which is a crucial element of its navy, while Russia has only one – which is currently inactive because it is under repair.

Russia has recovered from its post-Soviet economic and military collapse and launched a number of modernization projects in its armed forces, primarily in the air force and navy, but also in ballistic missiles with nuclear capacity. The new generation of Russian submarines with strategic (that is, nuclear) and cruise missiles further reduces the qualitative advantage that the United States has in that field. Also, the growing number of Russian modernized corvettes and other smaller ships reflects their focus on coastal defense forces.

In any case, the biggest difference between the US and Russia is still visible in perhaps the most important item – the defense budget, which is $ 740.5 billion in the US and only $ 42 billion in Russia.

The third strongest military power in the world, China, has a Power Index of 0.0854, which is not too far behind America and Russia. Its defense budget, at $ 178 billion, is smaller than the U.S.’s, but significantly larger than Russia’s. Also, with as many as 2,185 million active members of the armed forces, this vast country has an advantage over both the United States and Russia, with whom it has a much friendlier relationship than with America, but with which it shares a vast land border.

China also has 3,260 military aircraft, of which 1,200 fighter jets, then 35,000 armored vehicles, of which 3,205 tanks and 777 warships, of which two aircraft carriers. China, writes National Interest, continues with significant, long-term investments in all its military branches, and is characterized by the potential for explosive growth of military capacities in a relatively short period of time. In addition to its own combat groups with aircraft carriers, China is also developing the sixth generation of bombers and fighters, and CNN recently published a large analysis with the conclusion that this country has built the largest navy in the world.

A particular cause for concern for the Pentagon is the fact that some of these ships will be equal to or better than anything the U.S. or other naval forces can send into action.