The effects of the secret nuclear tests that France conducted in Algeria for more than 60 years are still present in the lives of the residents of a number of regions in southern Algeria, while human rights organizations seek to shed light on the issue and force the French government to pay compensation to those affected.

This was stated in a report published by the British newspaper, The Independent, in which it revealed that France conducted 17 nuclear tests in Algeria between 1960 and 1967, including 11 tests in French military installations on Algerian lands after the country gained its independence in 1962.

The report, written by Speakman Cordal, shows that much of the waste and remnants of those experiments, including the tanks, helicopters, and planes that were used at the time, are still buried in the sand, equivalent to 3 thousand tons of waste, according to the estimates of the French Committee of the International Campaign to Abolish Nuclear Weapons.

According to the author, the radiations that leak from these types of equipment still pose a threat to the environment, the population, crops, and livestock decades after the French nuclear tests in Algeria, but the French government has not revealed the details of this waste buried in the sand or its locations to this day.

The writer confirms that researchers in France recently discovered that the winds that blew from southern Algeria and carried the sand of the Sahara to French lands were carrying harmful radiation.

Abdel Karim (in his late seventies), a resident of Tamanrasset, southern Algeria, recalls one of the first nuclear tests, which was dubbed “the blue Jerboa”. Speaking of the 70 kiloton explosion – that is, three times the blast that destroyed Nagasaki – which occurred 180 kilometers from his village, Abdul Karim said, “The French assured the residents that there is no need to panic if the ground shook under their feet. I was 17 years old at the time,” We did not see any smoke.”

“We felt that the ground was shaking,” he added, stressing that the French soldiers, officials, and experts who met to monitor the experiment did not expect the explosion to be destructive in that way.

Later, residents of the region noticed that a number of people had different types of cancer, and the incidence of congenital anomalies increased more than ever.

The suffering has been going on for decades

A 40-kiloton canister – which was supposed to contain an isolated well at the foot of the mountain – exploded and led to a radioactive leak in the desert that hit soldiers, observers, and residents of the surrounding countryside.

According to research prepared by Algerian journalists at a later time, the radioactive cloud that followed the explosion flew over the village of Martoutak, 60 kilometers away. 17 people died shortly thereafter, and many residents in the village of Marotak are still suffering from the effects of these radiations.

When the military bases were dismantled before being handed over to the Algerian army in 1967, everything was buried under the sand, from military equipment, such as planes and tanks, to the debris left by the explosions.

The repercussions of those experiences are still a daily painful reality in a number of Algerian villages. Abdul Karim explains that pollution of soil and crops results in persistent diseases in newborns, but residents never think of moving.

Two years ago, Algerian television broadcast a report revealing more atrocities in a village close to a secret experiment site in the Reggane region, where residents say that many of their children were born with physical or mental disabilities as a result of nuclear radiation.

Doctor Khaira Harzawi confirmed that “there are many cases of disability among fetuses, and there are countless abortions,” in light of a great shortage of medical equipment and supplies.

Do the Algerians get compensation?

Eleven years ago, Abdelkrim joined Taourirt, an organization that cooperates with French activists, and works to collect data on French nuclear tests in Algeria. The organization aims to mobilize support for the victims of those experiments to obtain compensation from France under the Maureen Act of 2010, relating to compensation for victims of French nuclear tests in Algeria and Polynesia.

As of last year, the organization had received 1,427 cases from Polynesia, and thanks to the efforts of a number of organizations and academia, including Princeton University, the number could rise to over 100,000.

On the other hand, the Algerians filed only 53 cases, and the reason for this, according to the author, maybe the judicial complexities and the language problem, as the procedures should take place in the French language. Of those claims, only one has been accepted.

The writer adds that hopes were finally renewed in dealing with this file after President Macron gave permission to uncover French archives related to the Algerian war of independence, which could help to know the exact nature and locations of the secret nuclear tests.

In this context, said Jean-Marie Colin, one of the authors of the report issued by the “International Campaign to Abolish Nuclear Weapons” in the case of the French experiments in Algeria, “If they disclose the waste sites, then they acknowledge that they have conducted experiments to develop weapons.”

“If they admit the toxicity of the sites and the sickness of the people who live near them, this could cause serious damage,” he added, referring to France’s reluctance to sign the Treaty on the Prohibition of Nuclear Weapons, which would open the door to humanitarian and environmental compensation in southern Algeria.

The positions of successive Algerian governments

The writer believes that the problem has been exacerbated by the stances of successive Algerian governments, which have often preferred to focus on the barbarism of French colonialism rather than providing necessary health care and humanitarian relief in the affected areas.

Colin believes that the Algerian governments’ neglect to address the problem of nuclear tests is based on fear of revealing the possibility of a deal that allowed the French to remain on Algerian soil after independence and secretly test dangerous weapons.

For his part, Abdel Karim ruled out that recent political developments would lead to tangible results in this file. The Independent has contacted the French President’s advisor on North Africa and the Middle East, Patrick Dorrell, but has not yet received any response. 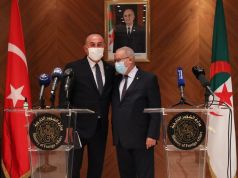 Turkey: Congruence of views with Algeria on regional and international issues