Turkish President Recep Tayyip Erdogan condemned the attack on a mosque in the southern part of the island of Cyprus, describing it as a “provocative act.”

This came in press statements, after performing Friday prayers in a mosque in Istanbul, reports the Anadolu Agency.

President Erdogan referred to the attack on a mosque in the village of Episkopi in the city of Limassol in Roman Cyprus.

“Unfortunately, the Romanian Cypriots do such behaviour constantly, and this coinciding with the European summit is nothing but a provocation,” Erdogan said.

In a separate context, President Erdogan touched on the Corona vaccination program in Turkey.

He expressed his hope that the Corona vaccination process would be completed by next May or June.

The Turkish President also pointed out the continuation of discussions with Russia regarding the import of Corona vaccines. 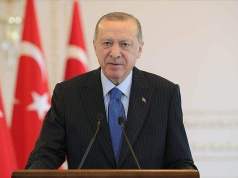 Including signing agreements.. Erdogan intends to visit Nigeria this October