And the Saudi Press Agency said that the Supreme Court in the Kingdom announced Tuesday the first day of the month of Ramadan after the sighting of the crescent was confirmed in one of the regions of Saudi Arabia.

And on Sunday, the Supreme Court announced that “no evidence has been received to prove the sighting of the crescent moon of the blessed month of Ramadan.”

She added in a statement, broadcast by the Saudi Press Agency on Sunday, that: “The court will hold a session on Monday and issue a decision in this regard, and it will be announced according to the practice.”

Also, the Saudi newspaper Okaz revealed in its yesterday’s edition, “It was not possible to see the crescent of the month of Ramadan in one of the observatories in the country, that” Monday will be the day that complements the month of Sha`ban. ”

And the Egyptian Dar Al Iftaa announced, on Sunday, that the month of Ramadan will begin in the country, on Tuesday as well.

The Dar Al Iftaa said in a statement yesterday, “The sighting of the crescent of the month of Ramadan after sunset on Sunday has not been proven by the legal and scientific committees spread throughout the republic.” 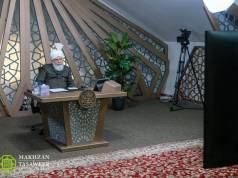