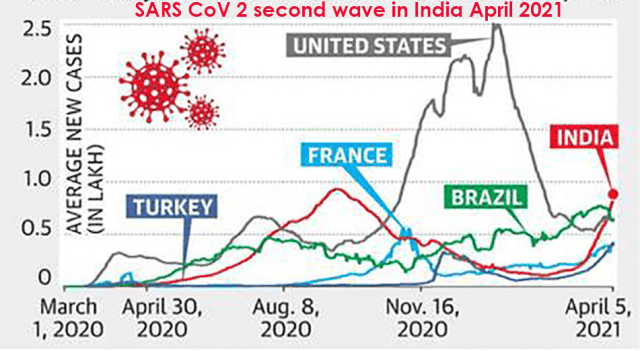 In a little over a year, in March 2020 the World Health Organisation (WHO) declared COVID-19 a pandemic and on March 24, India went into the longest lockdown. On March 25, 2020, the number of new cases stood 121 and deaths were two. In contrast to that in the corresponding month this year, there are more than 53,000 cases daily and more than 250 deaths. It is still rising, doubling every 12-14 days. India is now the country with the highest number of daily cases as the diagram above depicts. Unlike the first wave, the cases are currently much more widespread. The second phase, according to the scientists from the University of Florence in Italy, is the pulmonary phase (Phase 2), when the immune system becomes strongly affected by infection, and leads to primarily respiratory symptoms and low oxygen levels with predominant problems, including the formation of blood clots. Almost 55% of patients in the second wave would require oxygen support as opposed to 41.5 % case-need felt in the first wave, scientists have warned.

The states with high infections are showing signs of being overwhelmed by the current infection surge. Complacency led to unanticipated shortages of medicines, medical supplies and hospital beds, as health experts opined and added that all the planning that went into successfully tackling the first Covid-19 first wave were forgotten, and the public health system was back to square one. A team of scientist from the Kanpur based Indian Institute of Technology, through their mathematical modelling, has predicted that the daily infection count will reach a peak in May 2021, and warned that the case fatality rate, which as of now is low, will rise once the infection reaches the rural areas of Bihar, Uttar Pradesh and similar states that have inadequate health infrastructure. Independent calculations made by scientists, from Ashoka University in Haryana, have also predicted that the peak of the ongoing wave of infections could be between mid-April and mid-May. The contrast in the picture between March 2020 and March 2021 stands out. A number of issues arise. In spite of a massive vaccination drive, why are the numbers rising steeply? Is our strategy of dealing with COVID-19 flawed? What have we learnt in this one year of severe social and economic stress?

Coronavirus has been intensely researched globally and its genome was published quickly that aided the developments of vaccines in less than one year, a record. However, the virus keeps mutating and the strain found in different countries is somewhat different. Some strains are more virulent than others and spread faster. The Institute of Health Matric and Evaluation under the University of Washington, though their own modelling study strongly suggests that the new surge is linked to “escape variants”— which can override immunity afforded by the previous infection.

In India also, it is feared that the surge since mid-February could be due to new strains that may have evolved here. Public health experts asserted that the second wave in India has been widely attributable to the B.1.1.7 variant—first identified in the U.K.—which had ramped up cases in the state of Punjab. Another possible culprit is a homegrown variant, called B.1.617, with two worrying mutations. A separate, more infectious variant, named the Bengal strain—a triple mutant—has also been identified as the cause of many of the infections in West Bengal, epidemiologists pointed out.

As the virus mutates it is feared that it can evade the available vaccines. The duration for which vaccines provide immunity is not known. So, if vaccination is required every couple of years, not only for immunity boost but for new strains, massive vaccination drives will be required. If 60% or more of the population is vaccinated, ‘herd immunity’ is said to occur and that stops the spread of the virus. So, in India, at least 84 crore individuals would have to be vaccinated in one year.

The Government of India has already announced a mass vaccination drive. But the planning for logistics and production was unduly slow-paced, which resulted in a sluggish start. These in spite of India being the largest producer of Covid-19 vaccines worldwide, with the Serum Institute of India (SII) as well as indigenous ICMR and Bharat Bio-tech vaccine developed.  But recent US and European limits on the exportation of critical Covid-19 vaccine production materials have resulted in a severe vaccine shortage throughout the country currently, even though come May 1, every Indian above the age of 18 will be eligible for vaccination. Vaccines have not been tested for people below 18 years of age, so the trials are now starting in phases and it will take perhaps another six months for the results to come. Some reports also suggest that the vaccine is less effective in the case of those above 65 years of age because of their lower immune response. So, some countries did not recommend certain vaccines for the elderly. All these have caused confusion and hesitancy.

Since the virus is highly virulent in the second wave, people are once again been asked to maintain physical distancing along with the use of face masks and better hygiene via hand washing. Local containment zones or short duration lockdown announced in certain States.  During last year, festivals turned low key and sports events stopped or were postponed or held in an unnatural setting without spectators. Visits to religious places stopped for much of the year. Cinema halls and theatres were closed. Economic activities slumped with loss of employment witnessed. All these impacted citizens psychologically. The result has been that people were exhausted and itched to go back to the pre-pandemic days. As the number of infections declined, people stopped using masks or used them casually even though the virus threat stayed alright. In the recent months this year, India has been witnessed massive protests, elections rallies, and Kumbh Mela that on record acted as super spreader events. Tens of thousands gathered every day in such events to fall prey to the virus. During the period, observably the political compulsion got the better of public health concern, and that led the administration largely to issue cursory advisories about mask-wearing and maintaining physical distance without strict enforcement.

However, India had survived the first wave with distinct advantages, especially in keeping a low mortality rate. For the second wave, it is imperative to modify the country’s pandemic preparedness. Public health experts asserted that state governments and central agencies need to invest in stockpiling a small number of vital drugs and medical supplies at critical centres to give the industry enough time to respond to demand surges. To detect and monitor outbreaks and contain spread inside hotspots, a surveillance system must be mounted. Stricter COVID-19 precautionary norms enforced for the public, and quarantine procedures need to be adapted to halt the virus’s transmission and spread. Scientists opine that as the virus mutates, India will need to increase up genetic sequencing of positive Covid-19 test samples in order to catch new variants quickly. Testing and tracing that got relaxed lately thus need revamping. A successful COVID-19 vaccination will be crucial to lowering India’s daily new coronavirus cases and deaths. As far as logistics are concerned public health experts pointed out that India vaccinates 26.5 million infants per year for a number of diseases, as well as annual tetanus shots for 29 million pregnant women. The centres that can be used for these vaccinations offer cross-country storage facilities and distribution points for the COVID-19 vaccine, including 29,000 cold-chain points offering precise temperature customization for the doses. Public health infrastructure rejigs and social security support for vulnerable population reorganization have to be in place. There is an urgent need for better and closer partnership between the government and civil society organisations in responding to people’s needs during this pandemic. The pandemic has shown that it has to be tackled through collective wisdom and swiftly without delays – as otherwise, it may prove very costly.

More than 50 percent of FPOs are Potentially Viable and Efficient: MD, SFAC 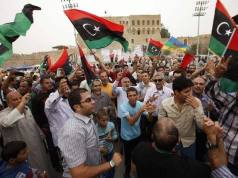