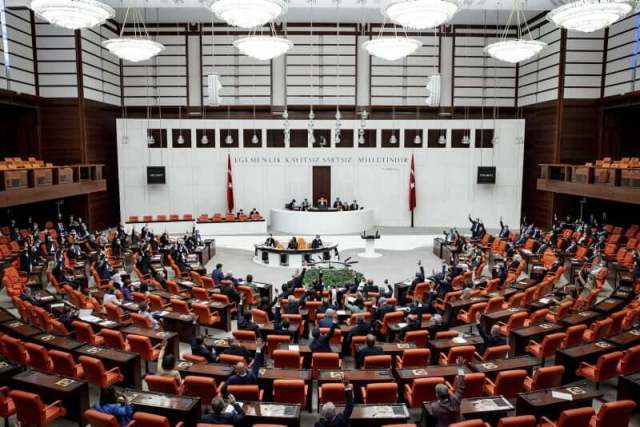 The Turkish Parliament strongly condemned US President Joe Biden’s characterization of the events of 1915 as a “genocide” against Armenians, considering his statements on the matter as a “rule of nothingness.”

This came in a statement adopted by the General Assembly of Parliament, on Tuesday, condemning and rejecting the statements of the US President in this regard.

The parliamentary blocs of the “Justice and Development”, “Republican People”, “E” and “Nationalist Movement” parties voted in favor of the statement, while the “Democratic Peoples’ Party” voted against.

The statement said that the Turkish parliament strongly and regrettably condemns Biden’s endorsement of the Armenian allegations in his statement issued on April 24.

Parliament affirmed its categorical rejection of these “baseless slanders, which only mean a politically motivated distortion of history.”

He added, “The American president does not have the legal and moral authority to make judgments in historical cases, and the statement he issued out of nowhere for us.”

Parliament called on the American president to reverse this decision, which will inevitably have “negative repercussions” on bilateral relations, and to change his erroneous statement that does not conform to “historical facts.”

Parliament also called on Biden to support efforts aimed at the peoples of the region to live in peace, stability and security, especially the Turkish and Armenian people.

And Saturday, Biden described the events of 1915 as a “genocide” against the Armenians, in contravention of the established tradition of his predecessors, presidents of the United States, to refrain from using the term.

In response to the move, the Turkish Foreign Ministry confirmed that Biden does not have the legal right to judge historical issues, and his statements about the alleged “genocide” are worthless.

Turkey stresses that it is impossible to launch “genocide” on these events, but rather describes it as a “tragedy” for both sides.

It calls for dealing with the file away from the political conflict and resolving the issue with the perspective of “fair memory”, which means abandoning the one-sided view of history, and each side understands what the other lived, and mutual respect for each party’s past memory.