“God-willing, one day will come when the Muslim Ummah, under the flag of the Promised Messiah (peace be upon him), will enter the Holy Ka’aba.” – Hazrat Mirza Masroor Ahmad

It was the very first time that people from the Holy Land were blessed with a meeting from Kababir with the representative of the True Servant of the Holy Prophet Muhammad (peace and blessings be upon him), the Promised Messiah (peace be upon him). Thus the ‘The Land of the Prophets’ was once again honoured by the Khalifa of a Prophet. 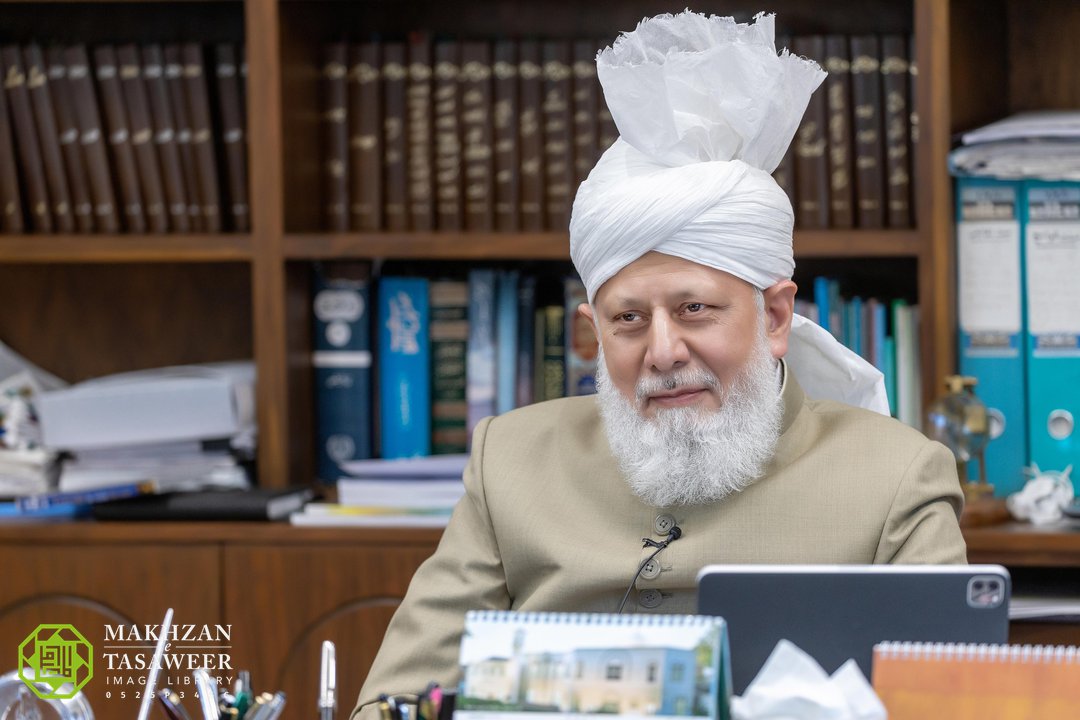 His Holiness presided the meeting from his office in Islamabad, Tilford, whilst the Ahmadi Muslims joined from the historic Mahmood Mosque in Kababir, built in 1931.

After some initial presentations, Ahmadi Muslims living in Kababir had an opportunity to ask His Holiness a range of questions.

One person mentioned that the Centenary of the Ahmadiyya Muslim Community Kababir will be celebrated in 2028 and sought the guidance of His Holiness of how they should best mark and commemorate this historic milestone.

“For a certain date to arrive or for a period to complete does not of itself fulfil any objective… When someone asked the Holy Prophet Muhammad (peace and blessings be upon him) about the Day of Judgement, he replied by asking ‘What preparation have you made for that day?’ Therefore, the importance of anything is dependent upon one’s preparation for it…” 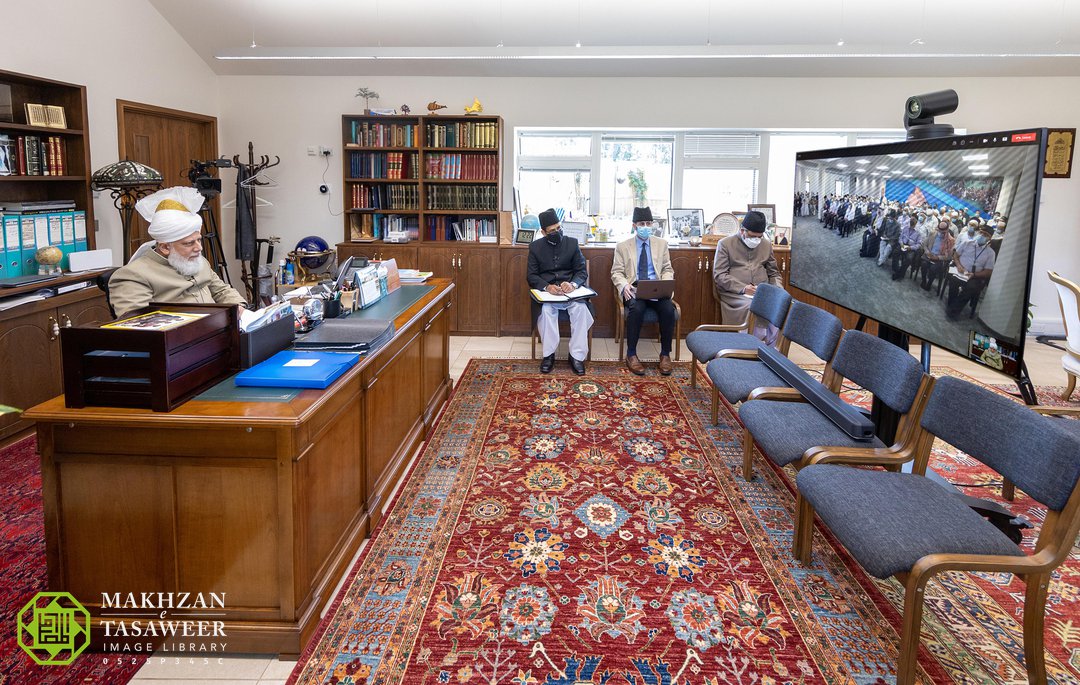 “You must ask yourselves, as you approach the centenary that how many of you are those who have adopted the true teachings of Islam? How many amongst you  have truly become the servants of the Gracious God? How many amongst you have reached the highest levels in the worship of God and are those who offer voluntary prayers along with their obligatory prayers? How many from amongst you are those who not only have a desire to spread the message of the Promised Messiah (peace be upon him) in their family, in their people and in their nation but actually endeavour and struggle in this effort? How many of you are observing the highest morals? How many from amongst you have established an atmosphere of peace, love, harmony and tranquillity within their homes? How many form amongst you are such who have enlightened their children about the teachings of Ahmadiyyat – the true Islam?”

“Thus, these are some of the ways to truly celebrate and mark your centenary. And only if you have fulfilled them or are striving earnestly to fulfil them can it be said that you are trying to celebrate the centenary in the best possible way. If this is not the case, then you must make a sincere effort in the coming seven years to ensure you are acting and living according to the true teachings of Islam. Furthermore, honestly assess how many of you are those who have a true relationship and bond with Khilafat and are fulfilling your religious pledges.”

In reply, His Holiness stated that wherever any Ahmadi Muslim witnesses cruelties or injustice it was their duty to condemn it and to advocate on behalf of those who were suffering and vulnerable. However, Islam did not permit for any person to take the law into their own hands or to incite or partake in violence or civil disorder.

“It is a commandment of Islam for a Muslim to follow the law of the land where he is residing. If the government is doing injustices, one option is to leave that place and migrate… Alternatively, if your voice can reach the authorities and the government representatives then you should use it to speak out against any injustice or cruelty and to condemn it – to do so is your responsibility. To every government, to everyone who is unjust, we should strive to make them recognise that injustice can never flourish. Certainly, we are the ones who do raise a voice against the injustice and for this we sometimes even have to bear hardships as well.”

“The first thing is that – according to the teachings of Islam – if the circumstances of a place are too difficult then a person should migrate if they can; rather than rebelling against the government, a person should emigrate from an unjust government. This is the example we find during the lifetime of the Holy Prophet Muhammad (peace and blessings be upon him). Or, if you are to remain then you must articulate your opposition to the cruelties by raising your voice against the injustice.” 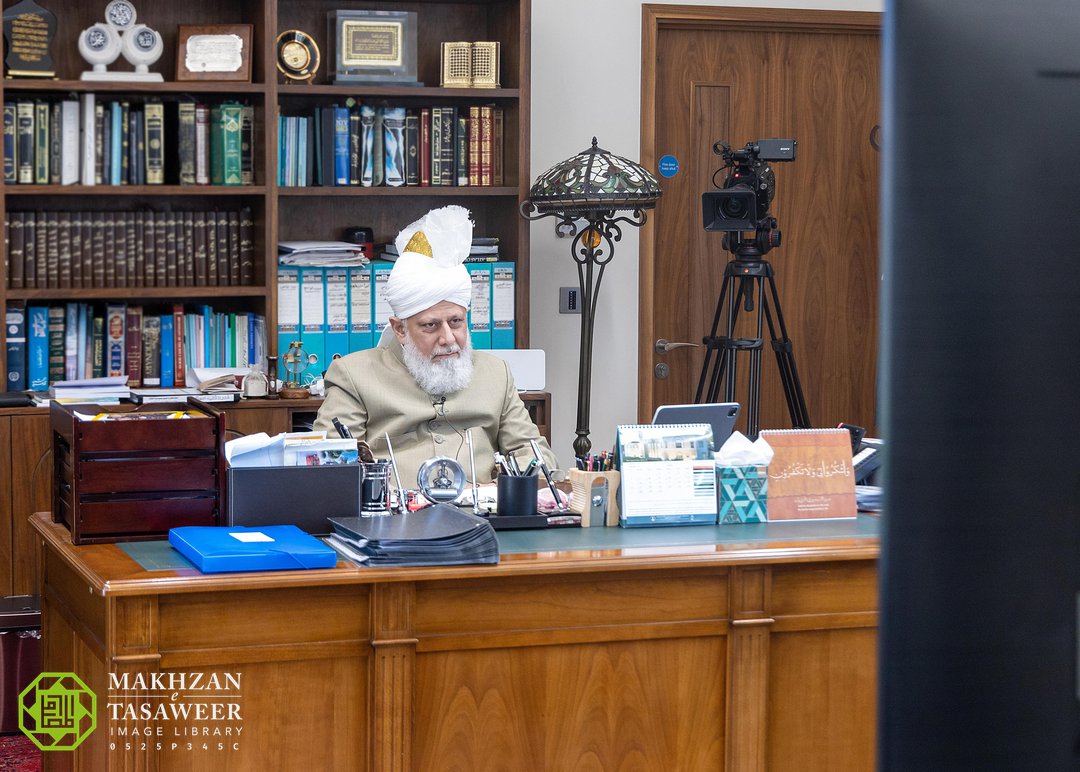 “It is not for an Ahmadi Muslim to create disorder and cause damage to property and to say things which may harm the nation and the country. Such actions do not have any real impact on those who are carrying out the injustices, rather it is the general population who suffer.”

His Holiness mentioned the words of the late Sir Chaudhry Zafrullah Khan, an Ahmadi Muslim, who whilst serving as the Foreign Minister of Pakistan in the late 1940s, outlined at the United Nations that peace would not be established in the Holy Land unless the rights of both sides were protected and upheld.

As he concluded his answer, His Holiness remined the Ahmadi Muslims of how real change for the better would be achieved through a meaningful relationship with God Almighty.

“If the Palestinians truly unite, supplicate and reach the highest levels of faith, morality and righteousness to such a degree where their supplications reach the threshold of Allah the Almighty then He will be the Helper of the believers and the situation will improve. Other than that – as I have already said in relation to Sir Zafrullah Khan – that until both governments and peoples have equal rights, the environment of enmity will continue and to end this animosity we must do whatever we can through wisdom and prayer.”

Another person asked His Holiness when it will be possible for the Caliph of the Ahmadiyya Muslim Community to enter the Holy Ka’aba, the centre of Islam.

“The Promised Messiah (peace be upon him) has said that, ‘The tasks that Allah the Almighty has assigned to me, and my prophecies and what Allah the Almighty has informed me in His revelations – which I have informed the Ahmadiyya Muslim Community of – those things will, God-willing, most certainly come to pass.’ When they shall come to pass, only Allah knows best… However it is for certain that these prophecies will be fulfilled because they are the words of Allah the Almighty and We have seen that numerous prophecies and revelations of the Promised Messiah (peace be upon him) have been fulfilled and what he said in relation to God’s words, they came true. And God-willing, one day will come when the Muslim Ummah, under the flag of the Promised Messiah (peace be upon him), will enter the Holy Ka’aba.”

Another attendee asked His Holiness about how he sees the future progress of the Ahmadiyya Muslim developing in the next ten years.

“God-Willing, we will come to see that the majority come to accept the Promised Messiah (peace be upon him), or at least in vast numbers and even amongst the Muslims, people will accept the reality that the Ahmadiyya Muslim Community is the true Islam.”

Another person mentioned that some people have intentions to do good deeds, however they fail to act upon them out of a lack of resolve. He asked His Holiness’ advice for such people.

“To merely say that one has an ‘intention’ is not enough. It can only be considered an ‘intention’ if a person is truly determined to act. To simply intend and think of something in one’s heart is something that is done by irresolute and hopeless people. If a person makes a real intention, then he also makes a resolve to carry out that deed. The Holy Prophet (peace and blessings be upon him) has said that ‘deeds are based upon intentions’ but it does not mean that you will be rewarded for the action simply by making an intention to act upon it. Rather, it requires for one to not only make an intention but to fully endeavour to achieve their objectives to the best of their abilities and then to leave it to Allah the Almighty.”