On 26 June 2021, the World Head of the Ahmadiyya Muslim Community, the Fifth Khalifa (Caliph), His Holiness, Hazrat Mirza Masroor Ahmad held a virtual online meeting with members of Nasirat-ul-Ahmadiyya aged between 13 and 15 from South England.

His Holiness presided the virtual meeting from his office in Islamabad, Tilford, whilst around 370 members of Nasirat-ul-Ahmadiyya gathered at the Baitul Futuh Mosque in London.

Following a formal session starting with recitation of the Holy Quran, members of Nasirat-ul-Ahmadiyya had the opportunity to ask His Holiness a series of questions regarding their faith and contemporary issues. 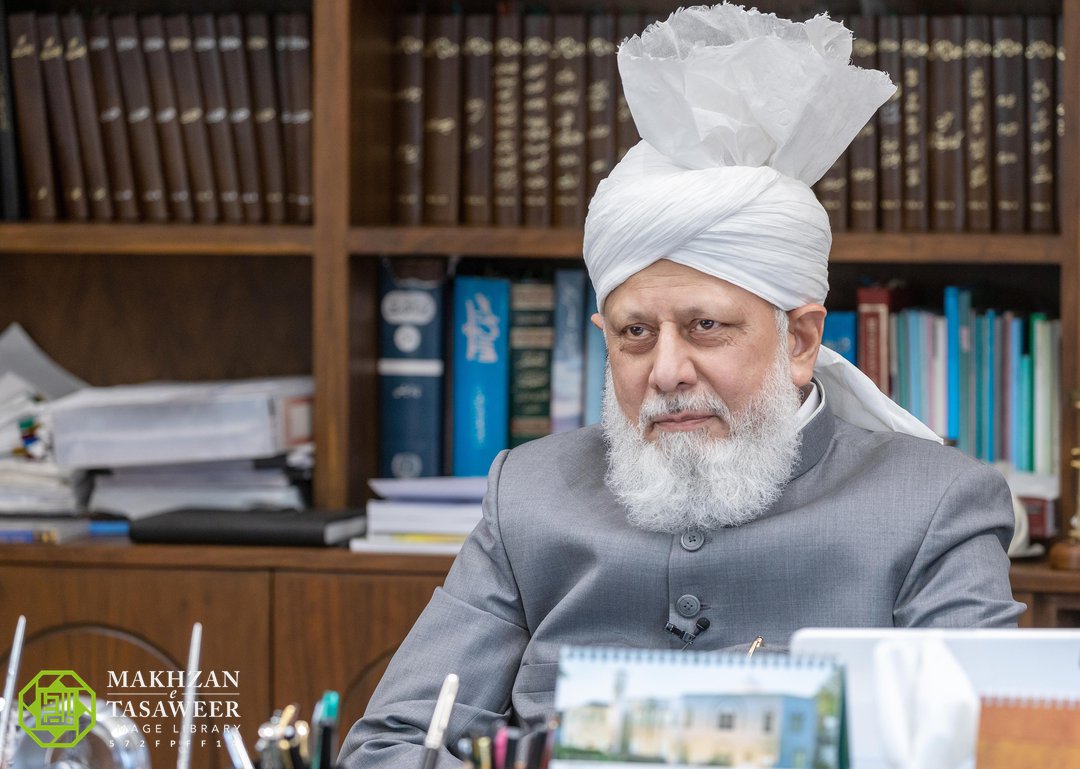 One of the Nasirat attending the meeting asked His Holiness why some societies around the world failed to treat women equally if Islam teaches that men and women are equal.

“We are not responsible for each and every society and nation. Islam says that men and women are equal and Muslims should treat the women as their equal partners… Islam says they are equal as far as their rights are concerned but there are some rights which are discharged in different ways. But it does not mean that women have been deprived from their rights. So, in a true Islamic society, men and women, boys and girls should be treated equally. Those who do not do this, they are going against the teachings of Islam.”

“It is the claim of the present-day society and the countries of the developed world that they treat men and women equally. But, with regards to jobs, women are not being treated equally. With regards to pay, if the same type of job is given to a man and a woman, women are paid less than the men. This is discrimination and Islam is against all discrimination.”

Another attendee asked His Holiness how someone can stay true to their faith whilst living in a society where they may feel afraid to express their own ideas for fear of being classed as rude or backward.

“The first thing is that you should not have any inferiority complex. If you believe in Islam, and if you think that your religion is the true religion and this is the last of the religions and it is the final religion and it contains all the good teachings which were revealed to the previous prophets, then there should not be any complex. Secondly, those people who are worldly people, who do not want to listen to you with regards to religious matters, why try to force them to listen to you? Find some good friends, talk to them in a light way, and when you think that they are ready to listen about God, about religion, about faith, then you can talk to them that what is true teaching of Islam.”

“Never say just outright that ‘Islam is the supreme religion and is better than any other religion.’ Although we can prove the supremacy of Islam on all other religions, but there is no need to upset other people by saying this directly. When they want to talk to you about religion, then you can show them the proofs (in favour of Islam). Tell them what is religion and your belief with regards to Allah the Almighty and your other beliefs with regards to prophets. Then slowly, with wisdom and amicable discussion you can talk to them and they will listen to you. Otherwise, if you are just blunt, then obviously they will say, ‘you are rude and backward.’ So, don’t try to be blunt, be wise.” 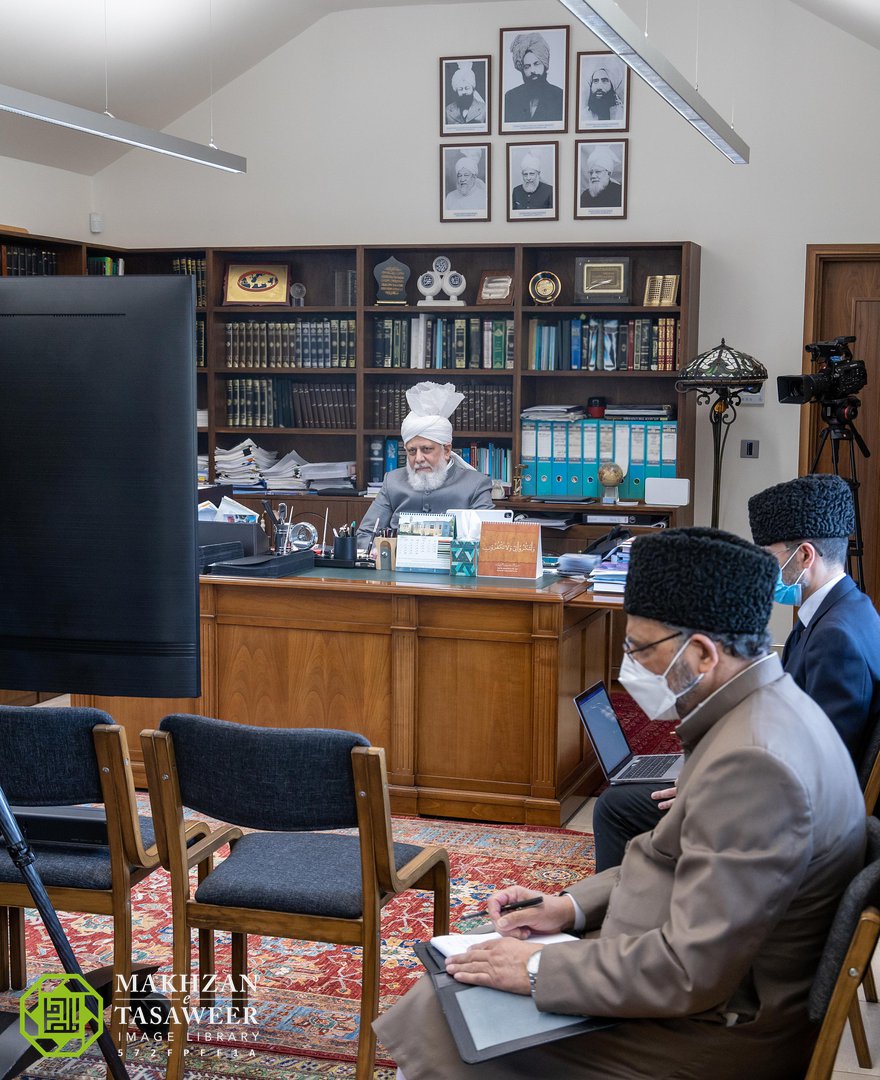 “This is the way opponents behave. You can ask them, ‘how do you know?’… Tell them that, ‘I know of myself, my parents, my siblings and loved ones much more than you. How can you tell me that you know more than me about them?’ So, this is the way they have been taught to behave and so let them do what they like. Their morals are with them.”

“These are the people who have been using obnoxious and abusive comments all the time. Didn’t they enact a law against Ahmadi Muslims in Pakistan that Ahmadi Muslims are not Muslims? What else do you expect from them? So, no need to worry. You should just read your (religious) history and then you would know that they are lying and without any complex you can clearly tell them that whatever they are saying is a lie and is concocted by their Mullahs [religious clerics].”

A girl mentioned to his Holiness that at times, as young people they do not agree to some advice from their parents, but later realise it was for their own benefit, so how should they behave in order to avoid such mistakes.

“When you will become a parent then you will realise it was for your benefit… Don’t make haste in taking any decision. When you hear anything from your parents, instead of immediately getting annoyed and refusing it outright, you should think and ponder over it and see what they are saying. Ask yourself if what they are saying is good or bad for you. So, being a wise person, being a mature person – now you are Nasirat of the age of 12, 13, 14 and 15, – you should try to see the pros and cons of the advice your parents are giving. If you have any doubt with regards to that advice, you can again ask your parents and it is the duty of your parents that they should explain.”

“So, you should think twice before taking any action – before denying it, refusing it or accepting it. Be patient and pray to Allah the Almighty that, ‘I could not understand what they are saying, so if it is in any way of my benefit then let me understand it and let me act upon it.’ This is how you can improve. Think twice and pray to Allah the Almighty before taking any decision.”

Another girl asked what prayers are beneficial in improving one’s mental health when facing pressure from societal norms and expectations.

“Dedicate one Sajdah or one or two rak’ats [parts of prayer] for your wellbeing. Then Allah the Almighty will guide you and, apart from that, recite Durood Shareef and the prayer ‘La haula wa la quwwata illa billahil aliyyil azeem’ as much as you can. Try to learn the meaning of it and then say this prayer. Then do Istighfar [praying to seek repentance from Allah] as well. Try to know the in-depth meaning of it. It will also save you from bad things and create and develop confidence in you.”

One girl mentioned that racism has been normalised and asked His Holiness’ opinion on how racism can be tackled.

“Why has racism developed? When you clap, you cannot clap with one hand, you have to use both. And so, there are faults on both sides. Some immigrants to Western countries do not try to integrate themselves within this society and apart from that, many do not work. Or if they work, some don’t pay taxes and try to isolate themselves from the local people. When these local people see that the immigrants are not integrating in their society, whilst they are also getting benefits from the government from their taxes, it angers them. And those leaders who have ill will towards immigrants are trying to incite the general public. This is why racism is increasing.”

Speaking about the need for Ahmadi Muslims to create better awareness about their faith and the positive contributions of immigrants as a means for tackling racism, Hazrat Mirza Masroor Ahmad said:

“Tell your friends that we are trying to be part of the nation and tell them that, ‘It is our belief that the country in which we are living, it is our country and it is the saying of the Holy Prophet (peace and blessings be upon him) that the love of your country is part of the faith and so we love our country.’ So, in this way you will have to work hard and try to explain everything to your fellow students… Mix with them but keep in mind that you should never lose your morals or your teachings and your faith.”