On 22 August 2021, the World Head of the Ahmadiyya Muslim Community, the Fifth Khalifa (Caliph), His Holiness, Hazrat Mirza Masroor Ahmad held a virtual online meeting with student members of Majlis Khuddamul Ahmadiyya (Ahmadiyya Muslim Youth Auxiliary) from Germany at the conclusion of their Annual Ijtema 2021.

His Holiness presided the meeting from his office in Islamabad, Tilford, whilst over 1,700 members of Majlis Khuddamul Ahmadiyya joined virtually from the FSV Stadium in Frankfurt.

The Ijtema became witness to faith-inspiring scenes as heavy rainfall poured upon the attendees whilst they sat untroubled by the torrential rain to not miss a second of time spent with their beloved leader and guide.

As the rain started, His Holiness enquired if the attendees were finding it difficult, to which the President of the Ahmadiyya Muslim Youth Association responded that they were enjoying the unique circumstances and they would sit to benefit from the company of their Khalifa regardless of what the weather brings and relish every moment of their august opportunity.

Following a short formal session starting with recitation of the Holy Quran, members of Majlis Khuddamul Ahmadiyya had the opportunity to ask His Holiness a series of questions regarding their faith and contemporary issues.

One of the students asked His Holiness for advice on the mind-set that he should try to develop as an Ahmadi Muslim researcher.

“An Ahmadi Muslim researcher should ponder and think like any other researcher, but in addition he should also pray for his work and seek help from Allah in his research. He should pray that the research he is conducting becomes so useful that it benefits humanity and is useful for the world and that it establishes the Oneness of God.” 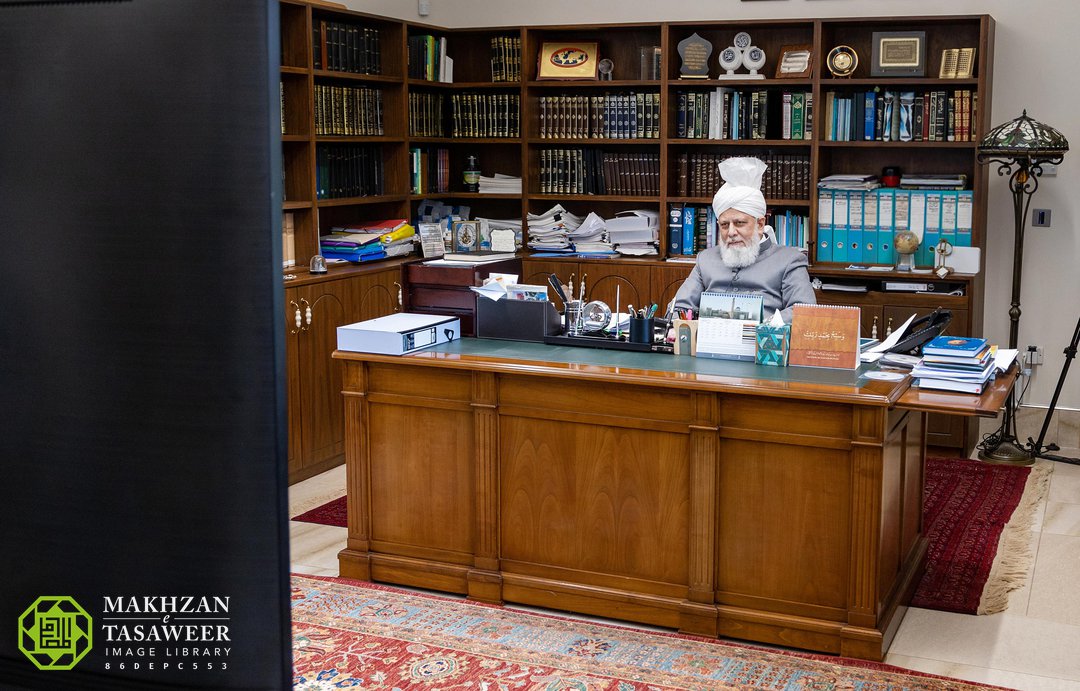 As the meeting concluded, His Holiness lovingly commended the youth for their strength of character and fortitude in bearing the harsh weather with patience.

“By the grace of Allah, all the Khuddam took the rain upon them [without hesitation]. I have seen that by the grace of Allah, in your Khuddam there is patience and fortitude – at the least they possess as much strength and expression of love, that they can bear the rain. May Allah increase the fortitude and strength and in reality may they become the servants of the faith and may they attain the purpose for which Majlis Khuddamul Ahmadiyya was established. The pledge that they always make whereby they promise to give precedence to their faith over worldly matters, may they act upon it and protect the institution of Khilafat and strive towards doing so with all their abilities.”