In his first comment, Ronaldo wrote in a post on his Instagram account, attached to a video that included his most prominent moments in Juventus, “Today I leave a wonderful club, the greatest in Italy and definitely one of the greatest in Europe. I gave my heart and soul to Juventus and I will forever love Turin.”

“The Bianconeri fans have always shown respect for me and I have tried to thank them for that by fighting for them in every game, every season and every tournament. In the end, we can all look back and see that we have achieved great things, not all we wanted, but with that we wrote a Nice story together.

He concluded, “I will always be one of you. You are now a part of my history and I feel like I am a part of yours.”

Twelve years after his departure from Old Trafford, Ronaldo returns to his former club, Manchester United, from which he launched to the world, after the latter announced, on Friday, that he had reached an agreement with Juventus for the transfer of the Portuguese sniper.

“Manchester United is pleased to confirm that the club has reached an agreement with Juventus regarding the transfer of Cristiano Ronaldo, subject to the fulfillment of the personal terms, visa and medical examinations,” the club said in a statement.

“Everyone at the club is looking forward to welcoming Cristiano back to Manchester.”

With this announcement, United ended almost 24 hours of speculation that Ronaldo seemed closer to returning to the blue section of the city, to rival Manchester City, 12 years after his departure to Real Madrid in 2009 with a world record deal at the time.

Ronaldo reached the “Old Lady” in 2018 after scoring 450 goals in 438 during an astonishing nine seasons in the Spanish capital, winning the Champions League four times.

Juventus saw in him the piece he needed to end a 25-year wait to win the prestigious continental title. However, the team failed to get past the quarter-finals in the last three seasons and lost the local league title after being monopolized for nine years in favor of Inter last season.

City had been linked with the 36-year-old Portuguese, especially after he failed to sign striker Harry Kane from Tottenham.

However, United’s Norwegian coach, Ole Gunnar Solskjaer, hinted that the club would make an offer to Juventus during the press conference earlier on Friday, in light of the team’s match against its host Wolverhampton in the third stage of the league on Sunday.

“Cristiano is the legend of this club, he’s the best player of all time for me,” Solskjaer, who played alongside Ronaldo before retiring in 2007, said. If he wants to leave Juventus, he knows we are here.”

Sky Sports Italia reported that United has made a €28 million ($33 million) offer to Juventus, and Ronaldo will sign a two-year contract under which he will earn €25 million per season.

Ronaldo arrived at United in 2003 at the age of 18 from Sporting and spent six seasons with him, during which he scored 118 goals in 292 games, winning the Premier League title three times and his first Champions League title in 2008 before adding four with Real Madrid, to win by The same year, he won the first Golden Ball for the best player in the world before he also scored four with the Royal Club.

He revealed, “When I spoke with Cristiano yesterday, he told me that he had no intention of staying at Juventus and therefore he would not be chosen to participate tomorrow (Saturday against Empoli). This morning he did not train.”

“Cristiano made his choice. These are things that happen in life. But Juventus remains, which is the most important thing. He made his contribution in three years, and now life goes on.”

Ronaldo, who was still under contract with his Italian club until June 30, 2022, won two titles in “Serie A” with Juventus, but his time in northern Italy did not live up to expectations.

However, Ronaldo topped the Calcio scorer, ahead of Belgium’s Romelu Lukaku, who joined this season from Inter to Chelsea for 97 million pounds.

He also proved during the last European Cup that he still had a lot to offer, winning the top scorer award (5) despite having played four matches before Portugal were eliminated in the round of 16.

“The idea of ​​him going to Manchester City was a torment,” said the United legend, who played alongside Ronaldo before retiring in 2011. “If there is a great player available in the market, Manchester United must be there.”

Manchester United have previously strengthened their ranks this season by including winger Jadon Sancho from Borussia Dortmund and French defender Raphael Varane from Real Madrid, in his quest to win the Premier League for the first time since the departure of his legendary Scottish coach Alex Ferguson in 2013.

Ronaldo joins strong names in the attacking line of the Red Devils, along with his compatriot Fernandez, Sancho, the veteran Uruguayan Edison Cavani, Marcus Rashfod, the French Anthony Martial and Paul Pogba and the young striker Mason Greenwood. 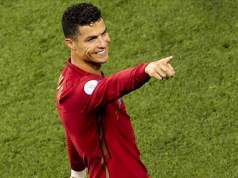