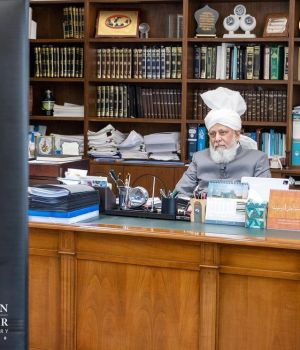 His Holiness gives guidance on a range of contemporary issues affecting young people in society.

On 5 September 2021, the World Head of the Ahmadiyya Muslim Community, the Fifth Khalifa (Caliph), His Holiness, Hazrat Mirza Masroor Ahmad held a virtual online meeting with students from Majlis Khuddamul Ahmadiyya aged between 16 and 19 from the Midlands of the United Kingdom.

His Holiness presided the virtual meeting from his office in Islamabad, Tilford whilst 60 students attended from the Darul Barakat Mosque in Birmingham.

Following a formal session starting with recitation of the Holy Quran, members of Majlis Khuddamul Ahmadiyya had the opportunity to ask His Holiness a series of questions regarding their faith and contemporary issues.

One of the students requested His Holiness to share one of his own cherished moments from his time as a member of Majlis Khuddamul Ahmadiyya.

“My every moment from Khuddamul Ahmadiyya I cherish. When you get old, you cherish every moment from when you were young. I remember when we used to hold our Ijtema, it used to be in the open air and we would erect our own tents. They were not properly-made tents as you get here in Europe or elsewhere, but, rather, we used to use our bed sheets. So when there was rain, the rain drops would enter into the tent since it was not waterproof. So, we used to cherish those days and enjoy that camping.”

“It was just a make-shift arrangement in an open field. The Ijtema marquee erected (in Rabwah) was also not waterproof as it is here. If there was rain, you were properly soaked! So, this is how we enjoyed our days. They would cook food on site and we would collect our food in our buckets. A group of 10 people would stay in one tent. These were the days I still remember and cherish.” 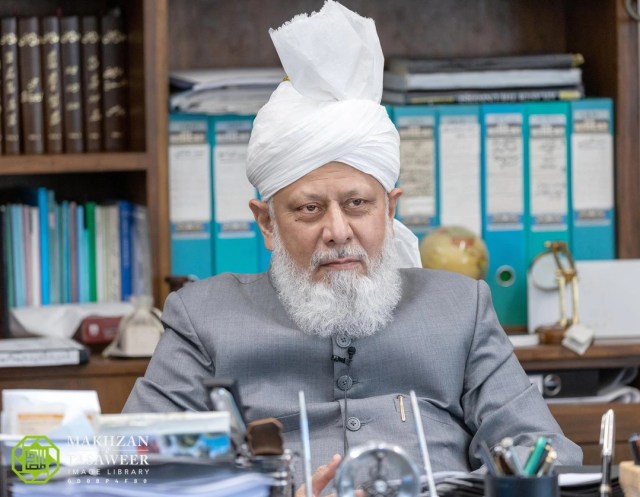 Another attendee asked His Holiness if there will we ever be peace for the nation of Pakistan, as its people are continuing to brutally persecute Ahmadi Muslims.

“If Pakistani ‘Ulema’ or so-called clerics do not change their attitude, there will never be peace in Pakistan, until and unless they behave well, practice good morals and change their attitude and try to be human. If they are doing inhumane activities, Pakistan can never be at peace. We have been seeing this since 1953, when there was so much hue and cry and protests against Ahmadi Muslims. Ahmadi Muslims were martyred at that time in 1953. But at the same time, Pakistani Ahmadi Muslims were free to hold the status of citizens of Pakistan. But now, after the constitutional amendment in the 1970s and after Zia-ul Haq’s further amendments, Ahmadi Muslims have even been prohibited and stopped from naming their children as the Muslims name their children. They cannot say ‘Bismillah’ and cannot say ‘Assalamo Alaikum’. And since then, they have further reinforced the laws against Ahmadi Muslims.”

“If you see the history of Pakistan, since [the persecution of Ahmadi Muslims began] there is no peace in the country. Whenever any political or military government comes, they are shaking and they cannot control (the country). They do not have control over their citizens. The clerics have taken over… Until they repent, I do not think there is going to be any change in Pakistan with regards to its peace.”

Another question related to the sacrificial animals slaughtered on the occasion of Eid-ul-Adha. The student asked that instead of sacrificing an animal, can people donate money to the poor?

“Should we introduce our own Shariah and Sunnah or follow what the Holy Prophet (peace and blessings be upon him) did? He used to sacrifice sheep. There are quite a number of people in the world who do not even get to eat meat. Here in Europe you cannot realise this. The people living here in Europe or in western countries or in rich countries, they can carry out their [Eid] sacrifice of an animal in the poorer places.”

“Once when I asked someone to sacrifice some goats somewhere in the African villages, I received the feedback that people who received the meat said that, ‘We have seen meat and eaten meat after three or four years!’… If you have enough money, then apart from your sacrifice on Eid-ul-Adha, you can give money as charity to poor people… But for Eid, you have to follow the Sunnah of the Holy Prophet (peace and blessings be upon him).”

A student mentioned that the Promised Messiah (peace be upon him) had prophesied that majority of the people will one day accept him as the true Imam of the age and so, he asked His Holiness Hazrat Mirza Masroor Ahmad about when such a time is likely to occur? 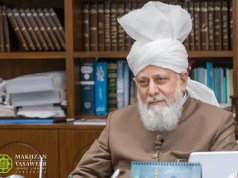 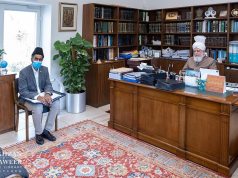 Members of Majlis Khuddamul Ahmadiyya from North England and Scotland Have Honour of a Virtual Meeting with Head of the Ahmadiyya Muslim Community –... 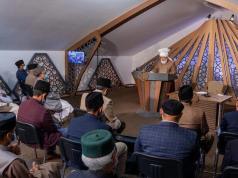