A Japanese woman (center, holding teddy bear with a graduation cap) in front of the NSTDC with the medical team after receiving BNCT for a malignant brain tumor. (Photo: National Tsing Hua University)

The doctor in charge of the treatment was Yi-Wei Chen of the Oncology Department at Taipei Veterans General Hospital (TVGH). He said that only Taiwan and Japan have medical centers using boron neutron capture therapy (BNCT) to treat cancer. However, Japan’s Ministry of Health, Labor, and Welfare has not yet approved BNCT for treating malignant brain tumors, leaving Taiwan as the only source of treatment for malignant brain tumors that are difficult to treat by surgery.

Chen said that the Japanese patient was originally diagnosed with rhabdomyosarcoma of the right ear canal at the age of six. After surgery and chemotherapy, the condition was stable for a time. Unexpectedly, the tumor recurred in 2018, and the tumor metastasized to the hindbrain. After it was determined that it turned out to be malignant peripheral nerve sheath tumor, she received heavy particle and CyberKnife treatment in Japan, but the tumor still recurred.

Thus she decided to come to Taiwan for BNCT, and arrived in April 2021. By that time the tumor was 6–7 cm in size, but after the first round of irradiation at the THOR BNCT Cancer Center, it shrank by 80%, and the compression on her neck relieved considerably, much to the delight of the medical team, and she returned to Japan. However, at the end of July, some signs of recurrence were discovered, and she was advised to return to Taiwan for a second round of irradiation.

She went to the THOR BNCT Cancer Center for treatment on September 17. After the injection of the Boron-10 drug and a 20-minute session of neutron source irradiation, she had a group photo in front of the NSTDC with the medical team, who presented her with a teddy bear wearing a graduation cap, as a way of wishing her a speedy “graduation” from her cancer. Afterwards, she thanked the medical team in fluent English.

Working closely with the TVGH, the BNCTC has treated over one hundred patients from all over the world, including Spain, Brazil, Australia, Singapore, Japan, and China.

BNCT is a kind of targeted radiotherapy in which the patient is first injected with a boron-containing drug; once the drug has accumulated in the tumor, the neutron beam from the nuclear reactor is used to irradiate the tumor, and the high-energy particles generated by the boron neutron capture reaction effectively kill off the tumor cells, without damaging nearby normal cells. Thus BNCT is well suited for treating diffuse cancers and cases in which surgery is contraindicated. 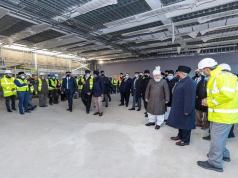