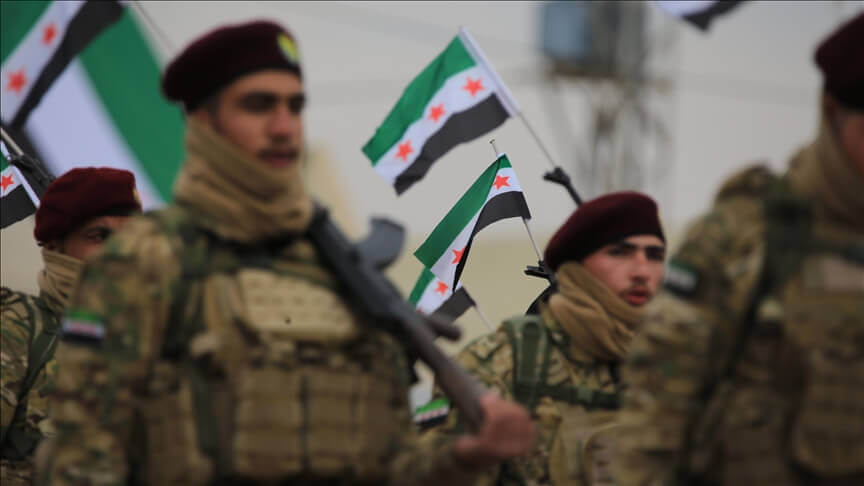 The global rise in prices as a result of the Russian military intervention in Ukraine has cast a heavy shadow on the already faltering Syrian economy, as the prices of basic commodities in the regime-controlled areas have risen significantly, more than double.

In conjunction with the rise in prices, the Syrian pound lost about 10 percent of its value to touch the barrier of 4000 Syrian pounds per dollar.

The high prices put great pressure on the Syrian citizen, who has been suffering for years from low income and facing high prices without the help of the regime, which focuses on military spending, in addition to rampant corruption in its institutions.

The average salary in Syria does not exceed $50, which has increased fears of famine in the regime’s areas with the rise in prices of basic materials.

And the regime’s failure during the past few years – after regaining large areas from the opposition’s hand – to obtain international support for reconstruction because of its position on its rejection of a political solution, and Caesar’s sanctions imposed by the United States deepened the severe economic crisis it suffers from.

The regime was unable to develop plans to mitigate the crisis as a result of rampant corruption, and has become almost completely dependent on its allies, Iran and Russia, to save its economy from complete collapse.

According to UN estimates, 90 percent of Syrians live below the poverty line.

Since the start of the Russian military intervention in Ukraine, the prices of basic materials in the regime’s areas have risen significantly, ranging from 50 percent to 100 percent.

And last week, the semi-official Al-Watan newspaper quoted an official in the Ministry of Tourism in the Syrian regime regarding the issuance of a new tariff for services provided in restaurants and cafes in Syria, with an increase of 20 percent.

The sources pointed out that meat in the regime-controlled areas has become a luxury for the ordinary citizen, and has been excluded from the list of foods he consumes because of their very high prices.

Yahya El-Sayed Omar, head of the “Trends” Center for Economic Studies, stated that the Russian-Ukrainian war left its economic effects on various countries of the world, at the level of energy, basic foodstuffs, and others.

Mr. Omar said that this led to an increase in the already high global inflation rates, and this matter applies to all countries of the world, including Syria, in its various regions.

He explained that the impact of the war on the regime-controlled areas has become very clear, as the general level of prices has witnessed a sharp rise during the past two months.

“Some commodities have increased in prices by 100 percent, such as vegetable oil, wheat, bulgur, and others, and these items are considered essential, especially in the month of Ramadan.”

He pointed out that this rise comes in light of the stability of the nominal value of wages, i.e. their value in Syrian pounds, and in light of the decline in their actual value, i.e. their purchasing power, which increases the severity of economic pressures on the Syrians.

“The economic effects of the war have a significant impact on the Syrian regime’s economy for two reasons. The first is that the regime imports the majority of its food needs, which means a direct impact on global inflation resulting from the war. On the other hand, the depreciation of the lira reinforces the rise in prices.”

With regard to the steps taken by the regime, he stressed that they are ineffective and are limited to offering foodstuffs in the Syrian halls for trade at prices that are 20 percent lower than market prices. These offered prices are also high and do not constitute a solution.

Khaled Tarkawi, a researcher at Jusoor Center, said that the priorities of the Syrian regime are different from any other government. Its priority is funding the army and security in the main.

He added, “We see, for example, that the regime signed a contract last month to secure quantities of tea and sugar for the army, and we also see the provision of air conditioners to the Internal Security Forces.”

Terkawi pointed out that the problem in Syria is not high prices, but that the main problem is the low income of the citizen.

Terkawi expressed his belief that the regime will not take any practical steps to improve the economic reality, but it will take advantage of the global crisis to tell the citizens that is the reason.

Explosion in a mosque in Kabul – A large number of...

In today's devastating explosion during the evening prayer in...

On Wednesday, August 17, the Armed Forces of Ukraine...

The UN drops a bomb on crypto’s use in...