2022 Lionel Gelber Prize awarded to Carter Malkasian for The American War in Afghanistan: A History
2

TORONTO and WASHINGTON, April 12, 2022 /PRNewswire/ — Judith Gelber, Chair of the Lionel Gelber Prize board, announced today that the winner of the 2022 Lionel Gelber Prize is The American War in Afghanistan: A History by Carter Malkasian, published by Oxford University Press.

The winning book is an account of America’s longest war, by one of the world’s foremost scholar-practitioners. “Drawing on his extensive knowledge of the country and its people, Carter Malkasian helps us to make sense of the complex political, military and societal forces that shaped the conflict over two decades,” said Janice Gross Stein, jury chair. “The American War in Afghanistan provides a truly comprehensive and compelling history of the U.S. intervention, from the early days of “Operation Enduring Freedom” to the Taliban’s resurgence as the U.S. forces pulled out of the country. A beautifully written and critically important book.”

The Lionel Gelber Prize is awarded annually to the world’s best non-fiction book in English on foreign affairs that seeks to deepen public debate on significant international issues. The prize is presented by the University of Toronto’s Munk School of Global Affairs & Public Policy, in partnership with Foreign Policy Magazine.

The winning book was selected from a shortlist which also included How to End a Plague: America’s Fight to Defeat AIDS in Africa by Emily Bass (Public Affairs/Hachette Book Group); The Long Game: China’s Grand Strategy to Displace American Order by Rush Doshi (Oxford University Press); Doom: The Politics of Catastrophe by Niall Ferguson (Penguin Press); and In the Midst of Civilized Europe: The Pogroms of 1918-1921 and the Onset of the Holocaust by Jeffrey Veidlinger (HarperCollins).

Carter Malkasian was the Special Assistant for Strategy to the Chairman of the Joint Chiefs of Staff, General Joseph Dunford, from 2015 to 2019. He has extensive experience working in Afghanistan through multiple deployments throughout the country. The highlight of his work is nearly two years in Garmser district, Helmand province, Afghanistan, as a State Department political officer and the district stabilization team leader. He is the author of War Comes to Garmser: Thirty Years of Conflict on the Afghan Frontier (Oxford University Press) and Illusions of Victory: The Anbar Awakening and the Rise of the Islamic State (Oxford). Malkasian has a doctorate in history from Oxford and is fluent in Pashto.

Following the announcement of the 2022 Lionel Gelber Prize, join this year’s winning author Carter Malkasian on Tuesday, May 10, 2022 at 10:00 a.m. ET for an online event presented by Foreign Policy Magazine and the University of Toronto’s Munk School.  The FP Dialogue will feature author Carter Malkasian in conversation with Foreign Policy’s Janine di Giovanni and jury chair Janice Stein, as well as an audience Q&A.

The American War in Afghanistan: A History by Carter Malkasian, published by Oxford University Press 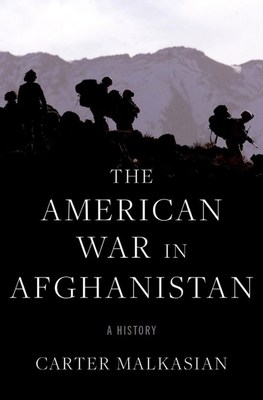 The American war in Afghanistan, which began in 2001, was the longest armed conflict in the nation’s history. In The American War in Afghanistan, Carter Malkasian provides the first comprehensive history of the entire conflict. Malkasian is both a leading academic authority on the subject and an experienced practitioner, having spent nearly two years working in the Afghan countryside and going on to serve as the senior advisor to General Joseph Dunford, the U.S. military commander in Afghanistan and later the chairman of the joint chiefs of staff. Drawing from a deep well of local knowledge, understanding of Pashto, and review of primary source documents, Malkasian moves through the war’s multiple phases: the 2001 invasion and after; the light American footprint during the 2003 Iraq invasion; the resurgence of the Taliban in 2006, the Obama-era surge, and the various resets in strategy and force allocations that occurred from 2011 onward, culminating in the 2018-2020 peace talks. Malkasian lived through much of it, and draws from his own experiences to provide a unique vantage point on the war. The ultimate outcome after America leaves is inherently unpredictable given the multitude of actors there, but one thing is sure: the war did not go as America had hoped. Although the al-Qa’eda leader Osama bin Laden was killed and no major attack on the American homeland was carried out after 2001, the United States was unable to end the violence or hand off the war to the Afghan authorities, which could not survive without US military backing. The American War in Afghanistan explains why the war had such a disappointing outcome.

Wise and all-encompassing, The American War in Afghanistan provides a truly vivid portrait of the conflict in all of its phases that will remain the authoritative account for years to come.

About the Lionel Gelber Prize

The Lionel Gelber Prize was founded in 1989 by Canadian diplomat Lionel Gelber. A cash prize of $15,000 is awarded to the winner. The award is presented annually by the Munk School of Global Affairs & Public Policy at the University of Toronto, in partnership with Foreign Policy Magazine.

USA “turned its back” on Ukraine? So far, nothing from sending...