HAIKOU, China, May 30, 2022 /PRNewswire/ — Under the guidance of the People’s Government of Haikou Municipality, the press conference of “Global Call for Entries: Haikou Urban Element Refining and Creative Design Scheme” was jointly sponsored and held by the Publicity Department of CPC Haikou Municipal Committee and the Tourism, Culture, Radio, Film, Television and Sports Bureau of Haikou City. 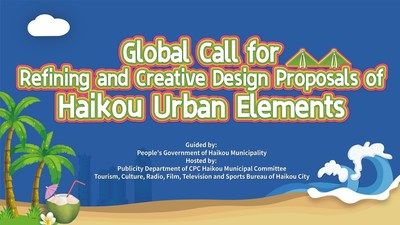 As the capital city of Hainan Province, Haikou is the political, economic, scientific and technological, and cultural center of the province, and has the important task of creating the core leading area of Hainan Free Trade Port. The “Global Call for Entries: Haikou Urban Element Refining and Creative Design Scheme” will call for strategic partners from all over the world, inviting enterprises, institutions, social organizations, art and craft colleges and studios engaged in cultural creativity and art design to refine Haikou’s urban elements. Based on these elements, a set of urban VI design schemes will be designed with creativity, in line with the city image of “Vibrant Haikou, Opportunity Haikou”, showing the regional characteristics and reflecting the characteristics of the city.

To encourage the design team to create the best works, the organizer will award the project partner with the honorary title of “Haikou City Culture Promotion ‘Peer'” and a series of specific resources and rights.

For details of the project announcement and specific requirements, please refer to the official website of the People’s Government of Haikou Municipality, the official website of the Tourism, Culture, Radio, Film, Television and Sports Bureau of Haikou City, and HKBTV.CN, or follow official WeChat accounts of Haikou’s Release, Haikou Broadcasting and Television Station, and other platforms.

Should we worry about Marine Le Pen becoming French president?

SINOVAC joins hands with HKU-CTC research team and Gleneagles Hospital Hong Kong to kick off a clinical trial of an Omicron-specific inactivated vaccine for...