Waqf-e-Nau Lajna from the U.S.A. Have Honour of a Virtual Meeting with Head of the Ahmadiyya Muslim Community
W

On 28 May 2022, the World Head of the Ahmadiyya Muslim Community, the Fifth Khalifa (Caliph), His Holiness, Hazrat Mirza Masroor Ahmad held a virtual online meeting with female members of the Waqf-e-Nau Scheme aged 15 and above from the United States.

His Holiness presided the meeting from MTA Studios in Islamabad, Tilford, whilst the Waqf-e-Nau gathered at the Baitur Rahman Mosque in Maryland, USA.

Following a formal session starting with recitation of the Holy Quran, the attendees had the opportunity to ask His Holiness a series of questions regarding their faith and contemporary issues. 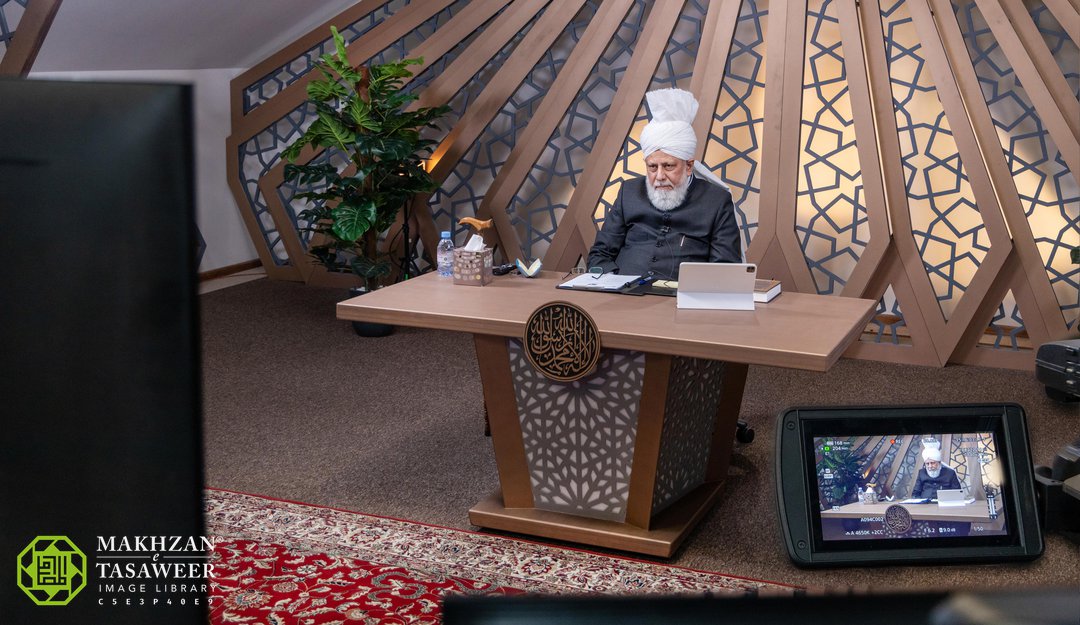 One of the Waqf-e-Nau Lajna members mentioned that the US Supreme Court may overturn a long-standing decision of the Court that established abortion as a constitutional right. In this regard, she asked if Islam allows abortion in the case of rape or health problems for the mother and baby.

“Islam says that you should not kill your children because of the fear of their upbringing, or [fear of a lack] of finances. That is the only thing which Islam prohibits for abortion. Otherwise, Islam says that if the health of the woman is at risk, you can do abortion. If the baby is not properly developing, you can do abortion. In the case of rape, also, if a woman says that she cannot bear the burden of this child, for example because of the society, that they will raise fingers on her all the time – and even if the child is born, the child will also face difficulties in his or her environment – then the mother can decide to get it aborted, Islam permits it. But not because of the fear of poverty. Not because [of the worry] that, ‘How can I take care of the child?’ This is the only thing. Allah says that, ‘I provide you for your well-being, I provide you your food, and I am The Provider. So, you should not kill your baby, or kill your unborn child because of the fear of poverty.’”

Another Waqf-e-Nau member asked how to maintain a good and moral state given the negative and immoral influences that pervade society.

In answer to her question, Hazrat Mirza Masroor Ahmad said:

“If you are a true Muslim, if you believe in One God, if you read the Holy Quran and you know the teachings contained within the Holy Quran, and if you know the spirit of the Oath of Allegiance, and if you are following the teachings or guidance given to you by the Khalifa of the time, you will not face such difficulties. You should not only claim that you are a Muslim, [rather] you should try to find out what are the commandments given in the Holy Quran by Allah the Almighty; what are the teachings of Islam. And if we truly act upon it then we shall reform our environment, our surroundings – not that they (negatively) influence us. And we should pray to Allah the Almighty as well, that Allah the Almighty always guides you on the right path.”

“You should always behave well, you should observe [good] etiquettes and respect one other. So, these are the teachings. If we are discharging our duties we owe to mankind, we owe to each other, then instead of being influenced by others’ actions, you will influence them instead.”

Another attendee said that some Christian friends said that when they prayed in the name of Jesus Christ their prayers were answered and asked how Muslims, who believe in Allah the Almighty, as the One and Omnipotent God should respond to this.

“According to Christians, Jesus Christ is son, and who is more powerful, the son or the father?… When the Father is there to accept our prayers, why should we go to the son for intercession? Why don’t we directly ask the Father, who has offered Himself that, ‘Yes, I am standing here, pray to Me and I will accept your prayers?’ So, you see, there is no logic behind their belief.”

“You should read more literature of the Ahmadiyya Muslim Community. Then you would know that sometimes when some person’s difficulties are removed and they get respite from their difficulties, then it is only out of the mercy of Allah the Almighty. You see, Hindus are also idol worshipers. They offer their prayers before different deities. Even among certain Muslims, in the Asian countries there is a concept that some of the holy people can solve their problems. This is why they bow down on their graves. Some people even believe that when they ask for anything from these people and offer a prostration before them on their graves, their prayers are accepted in a better way than when they pray to Allah the Almighty. There is no logic in it.”

A Lajna member also asked His Holiness what measures he takes to take care of his health.

“I used to do some exercise in the past, but now I don’t [have time]. From morning to evening there is work, so I don’t find time to do exercise. But at least, you are young and so you should take care of your health. This is your big responsibility, as you have been given the task to reform the world, and if you are healthy then you can do your work in a proper way.”