MUMBAI, India, June 15, 2022 /PRNewswire/ — Independent singer-songwriter Gaya returns with her 5th independent release ‘Qisse’, after a 5-year hiatus from telling stories through music. A multi-lingual musical tale of self-love and acceptance, the songs on this record are in Hindi, Tamil and English, with modern production rooted in Indian classical music. 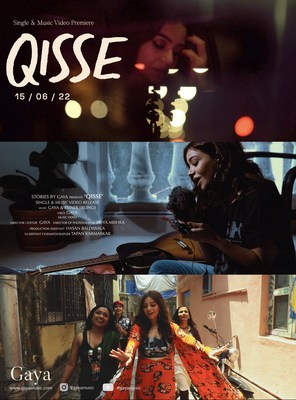 The first single of the album, titled ‘Qisse’ was released today. Streaming on all leading audio platforms, the track’s music video was shot on the streets of Mumbai. The album marks Gaya’s homecoming to her classic singer/songwriter roots and showcases her unique and soulful music that will reflect her journey with authenticity and poeticism.

Born in Chennai and raised in Dubai, Gaya is creating a name for herself in the wave of mainstream artists. As a musician and multidisciplinary storyteller, Gaya has been garnering audience love primarily in the Dubai music & creative space over the last 13 years and has toured the US, UK, Europe & India while promoting her previous highly-acclaimed albums like Gaya, Champion of Broken Hearts, Disengage as well as RollingStone Middle East’s highest-rated unsigned album from the region – ‘The Unknown’.

Talking about the album, Gaya says, “The inspiration for the single ‘Qisse’ comes from my journey over the last 5 years when I started to spend more time in Bombay. Often, especially as a woman, you find yourself moulding your life and decisions around the people and the relationships in your life. Your identity gets tied to others. This song is about recognizing the power of selfhood, about finding a way back to that self and creating your own path in the world.”

“Every song on ‘Qisse’ lyrically tackles the journey of the self with pain, heartbreak, love, creativity and self-worth. I hope that my listeners find healing in this piece of work and the knowledge that they are not alone in everything they go through as a person,” she further added.

Gaya’s music is heavily influenced by the Carnatic & Hindustani classical music of her childhood combined with the singer/songwriters of the west, whose music she discovered as a teenager. Gaya is considered a pioneer in the Middle East and was recently awarded the prestigious UAE Golden Visa for her contribution to the arts & culture in the region. She has also collaborated with Grammy-winning artist Joss Stone and opened for Florence & the Machine at F1 in addition to having performed across all of the UAE’s best known venues such as Dubai Opera House, Dubai Expo, Music Hall, Sikka Art Fair, Dubai Music Week, etc.