CHANDIGARH, India and CHICAGO, June 28, 2022 /PRNewswire/ — “Prime Minister Narendra Modi has encouraged the entire India to dream big and has shown the world that dreams can be achieved if pursued with determination and persistence,” said Taranjit Singh Sandhu, Indian Ambassador to the USA, at the international launch of two books, ‘Heartfelt-The Legacy Of Faith’ and ‘Modi@20: Dreams Meet Delivery’ regarding Prime Minister Narendra Modi’s role in providing governance to the Sikh community at ‘Vishwa Sadbhavana’ event organised by the NID Foundation at the City of Chicago, the United States of America. 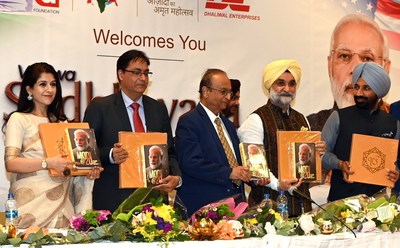 Addressing the gathering, Ambassador Taranjit Singh Sandhu said that Prime Minister Narendra Modi’s visionary approach, his leadership qualities and above all his humility and love for humanity has established him as a global leader in the true sense.

“As the head of 1.4 billion citizens, our Prime Minister has encouraged each of us to dream big. In a real sense, he has gone on and has shown us that these dreams can be achieved if pursued with determination and persistence as seen in India’s rise on the global map. Let us all continue to dream big and work passionately towards achieving those dreams,” he exhorted the members of the Indian diaspora in the audience.

Brought out by NID Foundation, the book ‘Heartfelt-The Legacy Of Faith’ documents Prime Minister Shri Narendra Modi Ji’s belief in the Sikh Guru’s and their teachings, and his earnest efforts for enabling justice and prosperity and delivering upon the long-overdue mainstays of the Sikh community. The other book, ‘Modi@20: Dreams Meet Delivery’ by famed Oncologist in America Dr Bharat Barai, is a compilation of chapters by intellectual and domain experts, providing with an expansive exploration into the fundamental transformation of Gujarat and India over the last 20 year due to his unique kind of Governance.

First to be organised offshore, the Vishwa Sadbhavana was the latest in the series of such events organised by the NID Foundation and picks up from the legacy of last event held at New Delhi in April this year, wherein a contingent of 138 highly decorated Sikhs from India and abroad met the Hon’ble Prime Minister at his official residence.

Sri Sri, who was the guest of honour at the event, underlined the Vishwa Sadbhavana event as ‘something noteworthy’ and said that the event has come at a time when the entire world is looking at modern India to bring peace across the globe.

Sri Sri hailed the NID Foundation for coming up with the book ‘Heartfelt: The Legacy of Faith’ which he said, “will bring to light to our society the great achievements of the current government, under the leadership of Prime Minister Narendra Modi.”

“The book brings to the light some of the most landmark decisions of PM Modi for Sikh community which are long due which have been as depicted accurately in the book, be it the compensation to the victims of 1984 anti-Sikh riots or fulfilling the decades-pending demand of Sikh of opening the Kartarpur Corridor, be it translation of Guru Nanak Bani in 15 other languages to take Guru Nanak Dev Ji’s ideology and teachings to the masses or protection of Sikh heritage in Pakistan. I congratulate NID Foundation and Satnam Singh Sandhu, who along with providing education to thousands of young people through Chandigarh University, have been spreading the spirit of Sadbhavana.”

Speaking on the occasion, Ron Johnson noted that the US-Indo bilateral relationships have attained new depth and momentum ever since Prime Minister Narendra Modi has come to power in India.

“The USA has always considered India as its natural ally. There is so much that the two countries are doing together and will continue to do together. The two countries are continuously deepening the major defence partnership, encouraging economic engagement, and expanding the partnership on global health, pandemic preparedness, and critical and emerging technologies,” said the senior senator from Wisconsin.

S. Satnam Singh Sandhu, Chief Patron, NID Foundation hailed Prime Minister Modi as an illustrious leader, highly experienced strategist but above all a great humanist and expressed gratitude for the pro-Sikh decision under the current dispensation.

Sandhu said that the book ‘Heartfelt-The Legacy Of Faith’ by the NID Foundation is an honest attempt at documenting the facts of the history of the Sikh community and the teachings and philosophies of the Sikh Gurus.

“It captures the virtues of Sikhism that are Satt, Santokh, Daya, Nimrata and Pyar, and goes on to show that the values and ethos of the country are not forgotten, rather they are being implemented in our governance model because of their universal and timeless relevance. Taking the five essential virtues of Sikh living as the central theme, the book connects the various initiatives taken by Prime Minister Shri Narendra Modi Ji for the cause and welfare of the Sikhs and the Punjab with the Sikh way of living, thereby highlighting the Prime Minister’s embodiment of upholding truthful values, compassion, humility, contentment, and love for all mankind,” he said.

Dr Debbie Ford, Chancellor, University of Wisconsin-Parkside, praised the efforts of the NID Foundation for education and said that the opportunities given by the foundation to build new Partnerships between Universities around the world are precious as they give the graduates of the future the chance to learn from different cultures.

“The efforts in the direction of forging some of the very important partnerships for education, for the generations to come, are commendable,” added Dr Ford.

It may be mentioned here that the NID Foundation has been working tirelessly for nation building in various capacities. From implementing the new education policy to bringing Indian universities to the top positions at the international level, several decisive steps have been taken by the Foundation ever since its inception.

With active participation of thought leaders like Satnam Singh Sandhu, the NID Foundation is conceptualized and developed at the intersection of issues that are critical to building a New India and focuses on shared global responsibilities, ecological conservation, education, sustainability, and universal wellness. NID Foundation builds partnerships that bring together resources, expertise, and vision while working with the core actors of nation-building to identify issues, find solutions and drive change.