MUMBAI, India, July 8, 2022 /PRNewswire/ — For over a decade, Welspun alongside its heritage brand Christy has been manufacturing towels for Wimbledon at its Terry Towel Facility in Gujarat, India. Thousands of employees give attention to the slightest of specifics for these premium towels, after all, perfection is the hallmark of Welspun.

This year special towels have been designed using the original architectural drawings from over 100 years ago of the first centre court complex (in 1922). Wimbledon completed 100 years at the famed Centre Court venue this year and a limited edition Centenary Towel has been released as a part of the celebratory merchandise.

These premium towels contoured with old gold coloured threads are produced from the finest grade of cotton which make them highly soft and absorbent. Sustainably made, the Championships towels are Oeko-Tex MADE IN GREEN certified, signifying that they have been manufactured without using harmful chemicals and produced in factories that adhere to ESG framework.

Welspun has been associated with Wimbledon since 2006 when it acquired Christy, a British towel brand. Post 2010, its manufacturing base was shifted from Hyde, Greater Manchester to Vapi in Gujarat. These rich, premium towels which carry the Christy brand are a considerable part of Wimbledon’s history. For 35 years, Christy has been supplying the Official Championship towels to the tennis elite to use on the world-famous courts at Wimbledon. Christy has done away with futile plastic packaging using sustainably sourced FSC certified card instead. The Centenary Towel is a testament of the trust that global entities share with Welspun.

The iconic towels hold a prominent position in Wimbledon’s legacy and are popular souvenirs amongst spectators. Internationally celebrated players have been taking these towels back with them for ages or throwing them to the spectators owing to its popularity. These premium towels with the Wimbledon trademark are a prized possession which makes them highly sought after around the globe.

Welspun India Ltd (WIL), part of $2.7 Bn Welspun Group, is a global leader in Home Textiles. With a distribution network in more than 50 countries and world-class manufacturing facilities in India, Welspun is strategic partners with top global retailers. WIL is driven by its differentiation strategy based on Branding, Innovation and Sustainability. 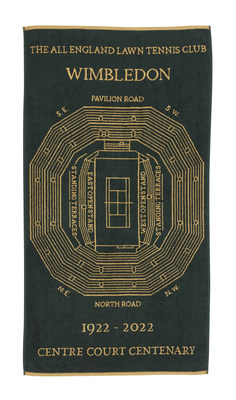 Pure Flour from Europe – for the Perfect Dough