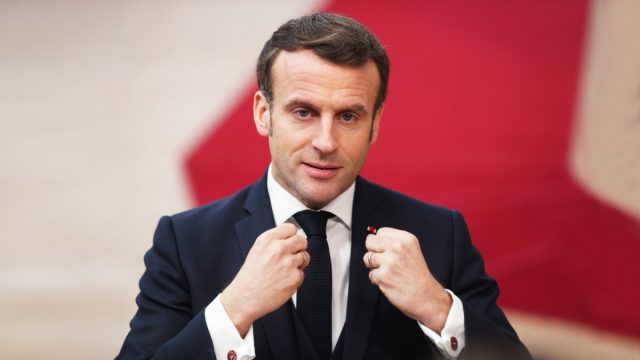 Ahead of the EU’s Corona Crisis Summit next week, French President Emmanuel Macron is demanding more European solidarity from Germany. Otherwise, the economic consequences of the pandemic threaten to put populists in power all over Europe, he warned. “Now is the moment of truth when it comes to whether the European Union is a political project or just a market,” he said Financial Times. “We need financial transfers and solidarity to keep Europe together.”

Chancellor Angela Merkel (CDU) avoided responding to Macron’s request on Friday. It is “good custom” that the Chancellor does not comment on interviews in detail, nor does that of presidents of very important partner countries, said government spokesman Steffen Seibert. The Chancellor knew that “if we were located in the middle of Europe and had an international network, we would not get out of this crisis economically or humanly if we did not succeed in getting out of this crisis all over Europe”. This knowledge shapes “our actions and our willingness to show solidarity”.

Macron had accused Germany and the Netherlands of selfishness

Macron’s dramatic intensification refers to the Franco-German dispute over so-called corona bonds, which will also be the subject of the summit of heads of state and government on Thursday. Eurozone finance ministers have recently been able to agree on aid to countries such as Italy or Spain that are particularly affected by the virus pandemic and at the same time lack the economic potential to fight the beginning recession. However, the agreed aid of up to 540 billion euros essentially comprises loans.

But not common European bonds that would enable the southern countries of the eurozone to benefit from Germany’s high creditworthiness on the financial markets. Macron emphasized that it was not about sharing the existing debts of the euro countries. The federal government strictly rejects corona bonds. Neither in this case nor the Multiannual Financial Framework (MFF) for the years, 2021 to 2027 can an agreement be expected at the summit.

Read:  At the age of 100 years ... the death of the last princesses of the Iraqi royal family

Government spokesman Seibert left open whether the Chancellor could be prepared to make concessions. They share “the need for a European initiative to revitalize economies,” he said. Merkel’s coalition partner SPD, on the other hand, is ready to make fundamental course corrections.

“If Europe does not take the corona crisis, which is not due to any of the states, as an occasion for shared responsibility, it is jeopardizing 75 years of democracy and peace,” said SPD co-chief Norbert Walter-Borjans of the south German newspaper. Conversely, there was a great opportunity in this crisis, and it was time “now to finally realize that a divided Europe will no longer play a role in the global game of power and progress”. Europe must “free itself technologically and digitally from its dependence on China and the United States, and also develop a new pioneering role from social and ecological progress,” he said. “This is only possible if finances and taxes are seriously regulated collectively.”

Macron sees the danger that extreme political forces benefit if the European states do not assist themselves with money transfers. “If we are unable to do this, the populists will win, in Italy, in Spain, and perhaps also in France,” said Macron. Even EU states that are currently opposed to more financial solidarity are not immune to this. He was alluding to the Versailles Treaty: after the First World War, France made the mistake of economically punishing Germany and thus prepared the ground for the National Socialists. Therefore, countries like Italy should not be punished in the current crisis – in this case for being heavily in debt. The president acknowledges that Germany is helping its neighbors in the pandemic by taking in patients, not least from France. However, he also implicitly criticizes the partial closure of the common border.

The statements made by Macron, who after the corona pandemic also expects a transformation of global capitalism and a strong desire by citizens for more climate protection, are similar to some appeals heard in Brussels. EU Commission chief Ursula von der Leyen made an apology in the European Parliament on Thursday: “Too many were not there in time when Italy needed help at the very beginning”. She made it clear that she is sticking to her main project of the “European Green Deal” because “global warming will not slow down with the global recovery”.

Like President of the Council Charles Michel, she wants above all to use the EU budget for the years 2021 to 2027 to cope with the crisis. Higher contributions from net contributors such as Germany, Austria or the Netherlands should demonstrate solidarity. Because even if the crisis is currently symmetrical, von der Leyen says: some regions will suffer much longer. For this reason, the “principles of cohesion and balance are more important than ever”.

Jean-Claude Juncker, the former head of the EU Commission, finds clear words. “If we don’t invest the money that is necessary to ensure the rearmament of the European economy, the bill will ultimately be more expensive than if we do what is now necessary,” he says on Deutschlandfunk. Donald Tusk, who was President of the Council until the end of 2019, sees Berlin in duty and warns in the mirror: “Germany’s competitive advantage over other EU countries will be even greater after the crisis than before. Many in Europe find this unfair and also as a result of a lack of solidarity.”

Herman Van Rompuy, who was EU Council President during the debt crisis, is also concerned. The Belgian urges: This situation is a matter of life and death, which is why the heads of state and government should not, as usual, postpone decisions until the last moment.

“The Kremlin is not a social security for you”

Palestine: The Foreign Ministry summons the representative of Austria to protest the country’s legal observations to the International Criminal Court