Italy, the first epicenter of the pandemic in Europe and where COVID-19 left 33,530 victims, once again allowed its citizens to move freely between its 19 regions and two autonomous provinces as of Wednesday. Furthermore, the country reopened its borders to the Europeans in a crucial step back to normality after almost three months of isolation.

To try to revive the tourism sector vital to its economy and to try to save the summer season, international flights were resumed in at least three major cities: Rome, Milan, and Naples.

The authorities established mandatory temperature controls to get on the trains, as well as the mandatory use of chinstrap and gloves inside the cars. According to the decree of the Minister of Transport, Paola De Micheli, passengers with more than 37.5 degrees of temperature will not be allowed access to the trains.

Coronavirus, in Bergamo the places in the mortuary are over: corpses in church. In 18 days 142 Victims

“Today is a conquest. We achieved it with the sacrifice of all and without forgetting the victims and the health workers who worked in an incredible way,” said the Minister of Regional Affairs, Francesco Boccia, in radio statements.

“The country lives again,” he insisted.

Gondolas can sail the canals of Venice, lovers can imagine that they are the new ” Romeo and Juliet ” on the balconies of Verona. Since Monday, the Colosseum in Rome or the Vatican Museums receive visitors again, but the prohibitions of large congregations and the obligation to wear masks in closed places remain. 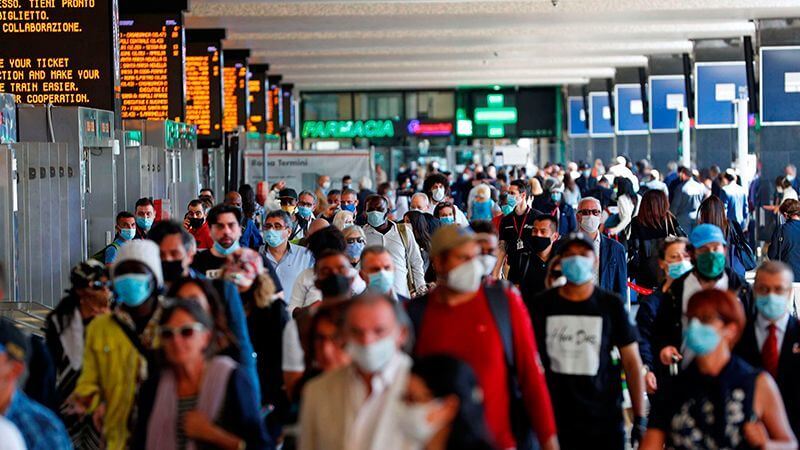 The empowerment of displacement within the country, in any case, comes after several crossings between the governors due to the difference that persists between a large number of cases in the north and south.

Thus, according to data reported on Tuesday by the Civil Protection, three northern regions ( Emilia-Romagna, Lombardy, and Piedmont ), concentrate 70% of the current 39,893 confirmed cases, while the six regions south of Rome gather less than 8% of the positives added.

In the Lazio region, where the capital is located, the local government prohibited entry to people over 37.5 degrees, while on the island of Sardinia the authorities arranged for compulsory registration for visitors, with an online questionnaire that will allow monitoring possible infections.

“It is fair that each president of the region strengthens its own system of control and health prevention,” Boccia added in that direction.

At the national level, although it is not mandatory, the Immuni App has been available since yesterday, which will allow marking the traceability of contacts to alert whoever installs it if they were in contact with positive people from Covid-19.

The country also began to accept from today the arrival of tourists from the European Union and the United Kingdom without the need to carry out the 14-day quarantine in force until yesterday, in a nod to the tourism sector that contributes 13% of the Gross Domestic Product (GDP).

Thus, a flight from the Bulgarian capital Sofia was the first to arrive at Rome’s Fiumicino airport from a European country, of the 16 scheduled for Wednesday.

In this context, the director of airport operations, Iván Bassato, highlighted in television statements that the airport terminal “continues with the measures, with temperature control, in the midst of a really vast plan to sanitize the airport,” and that they hope greater movement towards mid-June, “when several companies will resume much of the activity.”

Only 40 of the 1,200 hotels in Rome opened, the Corriere Della Sera explained on Monday, and only a dozen in Milan, as the owners consider it too expensive to open them to remain empty.

The chancellor Luigi Di Maio also highlighted the reopening of borders and through Facebook, said that “today is a very significant date, as of today the Italians can move freely throughout the country, among all regions. It is a country that is preparing to return to normality “.

The health crisis “is not over”, warned Tuesday, the day of the national holiday, the President of the Republic, Sergio Mattarella, who praised the “unity” of his country before the “invisible enemy”. From Codogno in Lombardy, where the virus emerged in Italy in mid-February, Mattarella called on the country to rise up with the “solidarity and courage” it showed in these difficult times.