March 2012. Innu of Uashat mak Mani-Utenam, near Sept-Îles, block access to route 138. They oppose the construction of their ancestral lands of the transportation line of the La Romaine complex. The police dismantle the barricade, an agreement is negotiated. To date, the Innu have not yet received the promised royalties.

The dispute is reminiscent of the rail blockade which has paralyzed part of the country for two weeks. This time, it is the wet’suwet’en hereditary chiefs who disagree with the Coastal GasLink project in British Columbia, which also crosses traditional territory.

What is happening is the result of the neglect of governments to sit down and settle the issue of aboriginal land claims in Canada. It is the same in our file. It is sad.

Eight years after the end of the road barricade on the North Shore, the Innu Takuaikan Uashat mak Mani-Utenam (ITUM) council has just launched a lawsuit against Hydro-Quebec claiming from the Crown corporation $ 9.1 million in damages and interests in particular “his institutional bad faith”, learned La Presse.

The community believes that the “behavior of Hydro-Quebec” made it “impossible” to implement the “ITUM-HQ 2014” agreement – which obtained the approval of the population by referendum – which provided for the payment of 75 million over 60 years to the Innu, jobs, and contracts. She now claims that the court declares this agreement “lapsed, null and void”.

The parties were never able to seal the final agreement, so the Innu never took advantage of the promised benefits. “With good reason, people have the impression of having been taken by boat by Hydro-Quebec. These are situations that the government must avoid and which are preventable, “says M e Bertrand.

“The government must take the means to avoid them by acting in good faith. Do not pretend because that is easy, but recognize that they have rights and respect them. […] Negotiating on this basis would completely change the way relations between Aboriginal peoples and the government are maintained. “

In the application filed with the Superior Court last November, the band also alleges that the Attorney General of Quebec and that of Canada “have failed in their obligations” by not taking concrete measures to resolve the impasse between ITUM and Hydro -Quebec during this legal battle.

She deplores the fact that despite the impasse, the state-owned company continued to “decimate and damage” the territory. The ITUM also holds Hydro responsible for “immense damage” to the Innu by having created “false expectations” for them and by causing “the breakdown of the social fabric”, “causing internal conflicts within the community”.

“Reaching agreements with communities whose leadership is contested by internal factions is a real challenge,” Hydro-Quebec communications director Serge Abergel explained to La Presse . “Beyond our discussions with official bodies, the band council and the chief, the agreements must also be the subject of a consensus in the communities concerned,” he added.

The crux of the matter is that traditional families have refused to drop the lawsuits against Hydro. The 2014 agreement provided, in return, that the Innu council had to discontinue all other legal proceedings concerning the La Romaine project and part of the other Hydro projects on the North Shore.

ITUM withdrew from the lawsuits in March 2015, following negotiations. At that time, a one-time payment of $ 6.6 million was made to the board.

It should be understood that the legal proceedings undertaken by ITUM were also carried out jointly with a few traditional families. Faced with the refusal of some to drop their lawsuits, the crown corporation therefore informed ITUM that it would no longer negotiate with the band until “unanimity” was reached.

“Obtaining unanimity is for all illusory purposes and this rigid requirement is a roundabout way of ending negotiations with the community,” wrote ITUM chief Mike McKenzie in a letter to the era to the big boss Thierry Vandal, we learn in the pursuit.

He will also write to former Prime Minister Philippe Couillard for Quebec to intervene and for him “to denounce HQ’s decision not to continue negotiations” towards the final agreement. However, in the court document, ITUM argued that the band and HQ had made “provisions” concerning the dissident families in the agreement in principle.

ITUM later said it was “ready to take up the cause for HQ” if certain families continued their procedures. The latter proposal remained unanswered by Hydro, according to the lawsuit. To date, no dissident family has brought new proceedings against Hydro-Quebec.

The “ITUM-HQ 2014” agreement has never been made public.

A group of natives partially hinder the only road link leading to the construction site of Hydro-Quebec, one of the largest in the country at the time, estimated at 6.5 billion. The demonstrators get the support of the ITUM council.

Referring to astronomical daily financial losses, the crown corporation obtains a court injunction. The Sûrete du Quebec deploys the riot squad. A dozen Innu were arrested. Quebec then promises to speed up the negotiation process so that the ITUM board and Hydro-Quebec come to an agreement. Which will happen two years later.

The agreement in principle “ITUM-HQ 2014” – third version since 2011 – obtained the green light from the community after a very close referendum (521 votes to 439). The two previous versions had been rejected by the community.

Hydro-Quebec will pay 6.6 million to the community after the signing of a settlement agreement formalizing the withdrawal of ITUM from the lawsuits against the Crown corporation. This will be the only amount the Innu will receive. 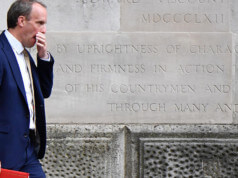 London imposes sanctions on 49 organizations and individuals worldwide, including Saudis and Russians 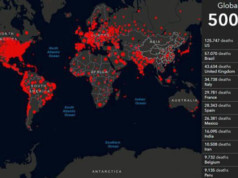