“I just did a blood test, yesterday I felt a little weak, they found a little infection (lung). I am taking antibiotics now, ” he said last night during his weekly transmission through social networks.

In addition, he said that he will travel to Bage today, in the Rio Grande do Sul. Yesterday morning he had visited municipalities in the states of Piauí and Bahia, where he shook hands with followers despite recommendations for social distance.

Bolsonaro was released last Saturday when the Covid-19 test was negative after almost three weeks of confinement.

“After 20 days at home you catch other problems, I caught a mold, a mold on the lung,” explained the head of state, in addition to guaranteeing that he was cured of the SARS-CoV-2, and without giving details on the type of infection.

Yesterday, the first lady of Brazil, Michelle Bolsonaro, tested positive. He is in “good health” and without serious symptoms, reported the Presidency’s communication secretariat.

On the other hand, in the live broadcast, Bolsonaro spoke about his government’s agreement with the University of Oxford and the AstraZeneca laboratory to buy vaccines, which are still in the experimental phase. “There is a lot of talk about the Covid-19 vaccine, we entered that Oxford consortium, everything indicates that the vaccine will work and we will have 100 million units,” he said.

Then Bolsonaro made a comment that the opinion was a critical biased towards China, which is developing the vaccine CoronaVac with the government of the state of Sao Paulo.

The vaccine promoted by the federal government is with Oxford, “it is not that of that other country, ok, people?” Said the president, who disagrees with the government of Beijing.

In fact, there is a dispute between Bolsonaro and the governor of San Pablo, Joao Doria, in the race to obtain a vaccine.

Doria, a political opponent of Bolsonaro who signed an agreement with the Chinese laboratory Sinovac, declared yesterday that he intends to manufacture 120 million vaccines at the Butantan Institute, which depends on the state government and the University of Sao Paulo. 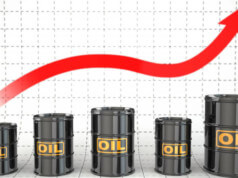 Oil prices have reached their highest level since early March

Melbourne under lockdown for the next 6 weeks due to a...

Oil prices have reached their highest level since early March

Anniversary of the first atomic bomb attack in history: 140,000 people...