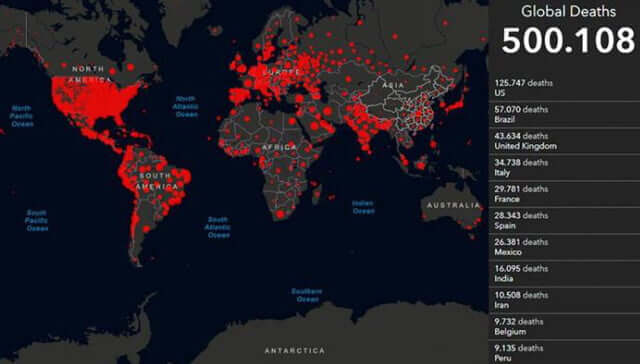 The rate of spread of the pandemic continues to accelerate, with one million new infections reported in just six days, particularly in America, the current epicenter of the disease.

However, these figures only reflect part of the reality, since many countries do not carry out diagnostic tests or do not have sufficient resources to carry out massive detection campaigns.

Although the increase in confirmed cases is due in part to more diagnostic tests being done, experts say there is abundant evidence that the pandemic is regaining the momentum in the United States, such as a boom in deaths and hospitalizations in parts of the country or a higher rate of diagnostic tests that test positive.

The rebound in the United States has sparked concern abroad. It seemed certain that the European Union would ban Americans from entering any time soon, within the new travel rules that are being prepared, according to EU diplomats.

In the fourth position, India has already crossed the threshold of half a million infections, with a total of 528,859 positives and 16,095 deaths, after breaking its daily record for the fifth consecutive day, this time with 20,095 infections. Then, the United Kingdom registers 311,727 infected people and 43,598 deaths, ahead of Peru, with 275,989 patients and 9,135 deaths.

The first recorded death from the virus was on January 9, a 61-year-old man from the Chinese city of Wuhan who was a regular shopper at a market that has been identified as the source of the outbreak. In just five months, the number of COVID-19 deaths is now equal to the number of people dying annually from malaria, one of the deadliest infectious diseases. The average death rate is 78,000 per month, compared to 64,000 AIDS-related deaths and 36,000 deaths from malaria, according to 2018 figures from the World Health Organization.

The Eastern Herald’s Editorial Board is responsible for the stories published under this byline. That includes editorials, news stories, letters to the editor, and multimedia features on easternherald.com.

Rebels launch an attack near gas projects in Mozambique