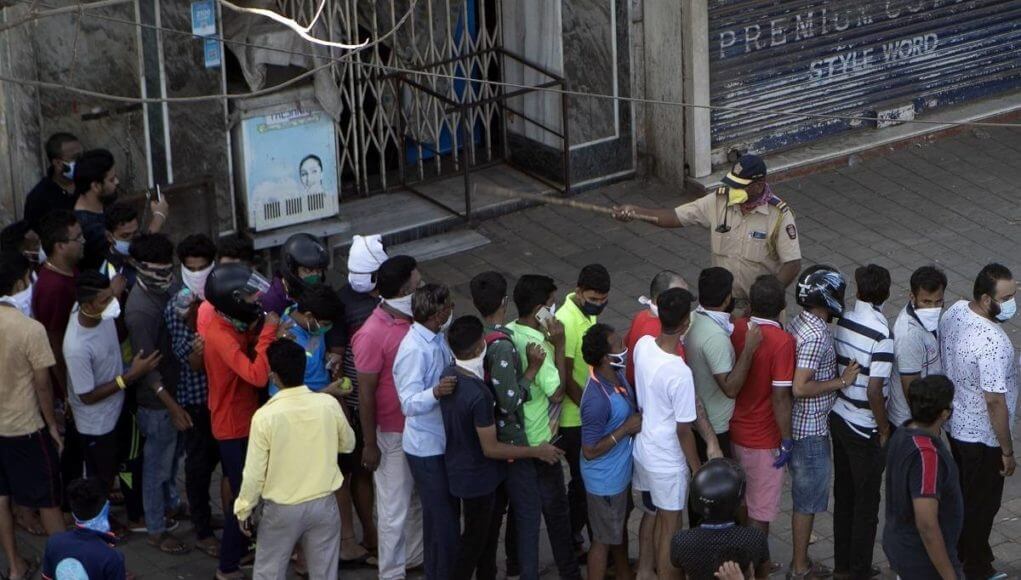 “When you really desire something from the heart and soul, all the universe conspires you to achieve it”,

For millions of Indians who exhausted their stock of booze during the prolonged and ever-extending lockdown, had their desires fulfilled when government decided to open up liquor shops at specific zones around the country during the Lockdown-III.

Expectedly preserving our government’s reputation of being unprepared or underprepared at best, thousands gathered around liquor shops, standing in kilometer-long lines, shattering all notions of physical distancing and exposing themselves to the virus which is waiting to latch upon them and wreak havoc on their respiratory system.

Opening up of liquor shops infused festivity among people who danced as if the COVID-19 vaccine has been developed. People were showering flowers on who they dubbed as ‘economy warriors’. Hundreds withstood scorching heat to hailstorms just to fulfill their desire.

State governments were particularly excited to open liquor shops because they literally earn hundreds of crores in revenue by imposing steep taxes on alcohol. Punjab, Maharashtra and all other major states earn a substantial amount to the tune of 10%-15% of their total revenue from booze sales, even though dry states like Gujarat and Bihar have done just fine without them.

During crisis times when the center hasn’t been providing adequate funds to fight the epidemic, states see alcohol sales to boost up their depleting revenue and to complement their increased spending.

On paper, it seems like a risk worth taking considering the record-breaking figures of alcohol sales raked in on the first day itself, UP reported sales of 100 crores, Maharashtra, 62 crores, etc. Even states have started exploiting the inelastic demand nature of alcohol products by imposing gigantic excise duty which ranged from 75% tax in Andhra Pradesh to 10% in Rajasthan. This hasn’t deterred our alcoholic brothers from purchasing liquors in heavy quantities which again strengthens the case for the state government’s decision to take this risk.

Witnessing the utter chaos around liquor shops, various state governments started to deliver alcohol over call or app by issuing e-tokens, which reinforces that state governments are in no mood to shut down booze stores. Zomato is also considering delivering booze straight to your home.

This decision may have good economic repercussions, but its societal impact is hardly virtuous. Lockdown fatigue, coupled with alcohol could provide disastrous results for families of alcoholics. Domestic violence reports are at an all-time high, Alcoholism could further increase that figure.

Its impact on the healthcare front has the potential of ballooning up of COVID-19 cases all over India due to poor implementation of social distancing across liquor shops.

Whatever be the case, this decision which has promising economic undertones may spell disaster for the healthcare sector and society alike. It’s a gamble every state has taken. Time will tell whether it’ll pay off or backfire big time.

Donald Trump announces that the US breaks relations with the WHO