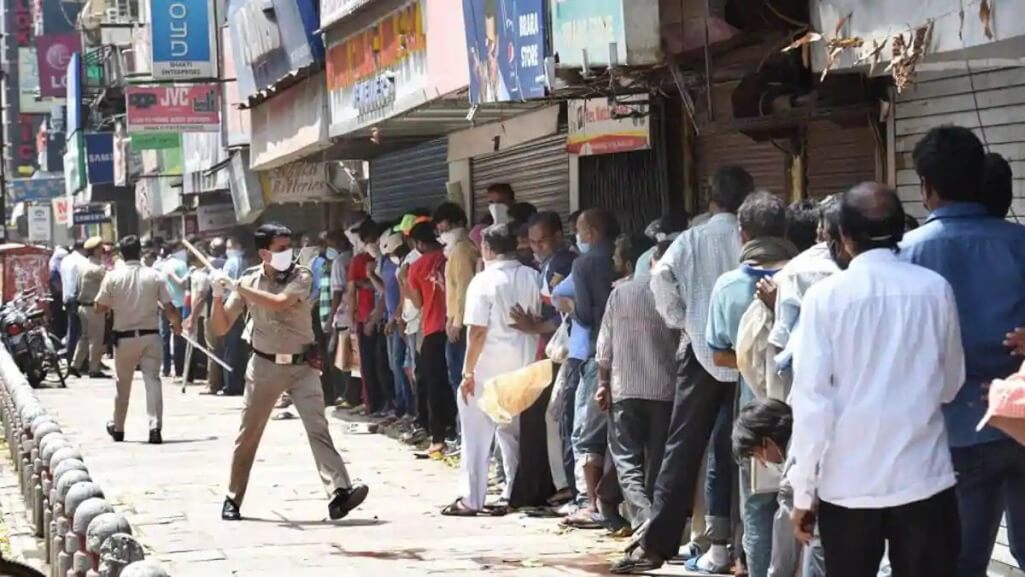 The Ministry of Home Affairs (MHA) of Government of India, in its order dated 1 May 2020, extended the lockdown till 17 May 2020 with new guidelines. Based on the incidence of infection, all the districts in the country are classified into three zones, viz., green, orange, and red. The MHA has allowed the sales of liquor and tobacco products in the green and orange zones, except malls and market complexes. In red (containment) zones, the sale of liquor would not be permitted. The ministry enunciated that “a minimum six feet distance (2 gaz ki doori) from each other and ensuring that not more than five persons are present at one time at the shop”.

As many states reopened the standalone liquor shops on Tuesday (5 May 2020), people thronged to the stores causing a disorder and a clear breach of social distancing norms. Creating chaos outside the liquor shops in many parts across the country has forced the police personnel and deployed local authorities to shut down the stores in midway. Such behavior of people raises a serious question about their being sensible and responsible citizens of the country.

Since the first day of the lockdown announcement by the Government of India due to the COVID-19 pandemic, the focus has been laid on three foremost national concerns. These are one, to prevent the spread; two, efficient health service delivery to the infected people; and three, speedy delivery of food/cash to the vulnerable segments. While the reported Coronavirus cases surpassed 50,000 and the number moderately increasing, such observed violation of social distancing norms outside the liquor shops could possibly bear ramifications through adding a number of cases to the current level of infection.

Revenue Mobilization from Own Sources and Excise Duty

While the unruly behavior of the public is well understood, on the other hand, many state governments are also not free from criticism. To increase the revenue base through excise duty, there are four states viz., Andhra Pradesh, Delhi, Rajasthan, and West Bengal had increased the excise duty on liquor. Andhra Pradesh levied an increased excise duty by 75 percent, Delhi by 75 percent, West Bengal by 30 percent, and Rajasthan by 10 percent. However, using people’s desperate propensity to consume alcohol, opening the liquor shops during such severe COVID-19 crisis with heavily levied excise duty could not be considered as a prudent people-centric approach.

In this context, an important contradictory instance needs to be critically discussed. The Special Chief Secretary of the revenue department of Andhra Pradesh said that “steep hike in liquor prices is to discourage the consumption of alcohol by the people, as part of implementing prohibition in the state in a phased manner and preventing heavy rush at liquor outlets”. If this is the prime underlying reason for opening the liquor shops amid lockdown, then this is clearly not the right time to execute this objective. Rather, it would be useful to implement this policy when the economy tends to return to normalcy. Thus, what could be inferred from this is that greater revenue mobilization is the key motive to finance several key socio-economic activities.

After witnessing a massive crowd of perpetrating disorders in front of liquor shops, a few state governments have considered some remedial measures. In Mumbai on 5 May, the government of Maharashtra took immediate remedial action by announcing that the liquor shops would remain shut from 6 May. To reduce the disorder outside the liquor shops, the state governments of Chhattisgarh and West Bengal endorsed online sales and home delivery from retail outlets only in green zones. The governments of Madhya Pradesh and Punjab have decided to sporadically open the shops. In this regard, it is important to note that the Kerala government announced not to open liquor vends during the entire 3rd phase of lockdown till 17 May 2020. It is widely argued that Kerala’s proactive political culture of participatory governance is the key to their success in containing the spread. The Madras High Court announced that alcohol can be sold online but the liquor shops will not be opened in Tamil Nadu.

However, the tax revenue mobilization capacity from own sources for the Indian states are quite low, and thereby, this has made them a heavily dependent on central transfers (tax devolution and grants-in-aid). As is evident from Figure 1 that the state-wise own tax revenue as a percent to GSDP ranges between 5 and 8 percent. When the varying nature of public policy regarding opening the liquor vends across these states is very noticeable, the varying pattern in the shares of excise duty in total own tax revenue across these states is evident as well. But, these two varying patterns are not congruous.

Figure 1: States’ Tax Revenue Mobilization from Own Sources and Revenue from Excise Duty: 2017-18

For instance, among all these states, the share of excise duty in total own tax revenue of Assam is 7.1 percent, which is much lower in terms of the states that increased the excise duty. Besides, the share for Chhattisgarh is much higher with 18.4 percent and much lower for Maharashtra with 7.8 percent. But these two states revised the norms of liquor sales to ensure social distancing. However, what is apparently common between them is that these states have allowed alcohol business with differing intensities to earn revenue.

Therefore, it would be safe to argue that opening/not opening liquor shops, revision in sale rules, and excessive levy of excise duty – all these policies across states are characterized by adhocism and arbitrariness.

When states’ own revenue mobilization is low then it is important to put greater emphasis on revenue mobilization efforts. Simplification should gain the focus against innovations in taxation across states in India. A good deal of literature argued that the citizens are generally not motivated by the government’s service delivery, and consequently, they tend to circumvent taxes. The ultimate focus should be laid on the proliferation of the tax base by lowering the rates so that it would create a win-win situation for both the taxpayers and tax administrators.

Unfortunately, in India, the incidence of tax evasion is quite high causing the states with low own tax revenue than its actual potential. In addition, many academicians and researchers argue that the wealth tax as a potentially rich source of revenue which was abolished in Union Budget from 2016-17.

In sum, low revenue mobilization effort is evident in many states, which is further compounded by the fact of the states’ stringent borrowing limits. Consequently, these issues have driven them to open liquor shops during the COVID-19 crisis to earn revenue from excise duty. Centre needed to ensure the states give money to combat this pandemic by borrowing from Central Bank, which would certainly be at much lower interest rate than borrowing from the capital market. Besides, the Centre should permit them to borrow as well.

Thus, to conclude, opening the liquor shops (with imposed increased excise duty) to collect revenue by putting the citizens at high risk especially when the spread is rapidly spiraling could not be considered as a utilitarian public policy per se. The borrowing from the Reserve Bank of India could be an effective and people-centric policy during this pandemic.