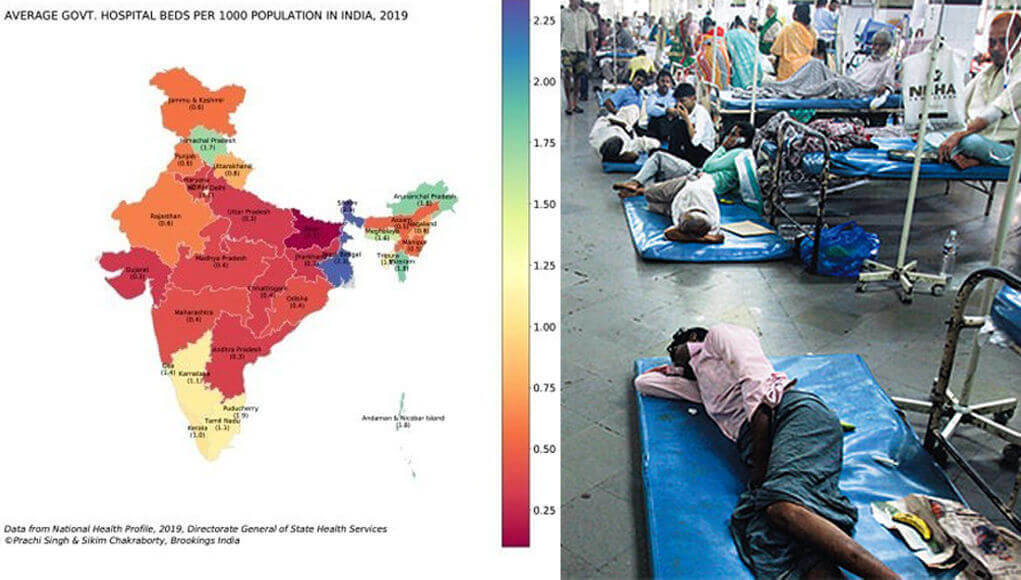 India is currently witnessing a considerable rise in daily Covid-19 infection across the urban and rural areas, as the administration is gradually relaxing lockdown in a phased manner. Already media reported of increased Covid-19 infected persons, requiring isolation and some critical care unit-based services of the government hospital, indicative of straining the existing healthcare facilities in some states with a high load of infected patients are emerging.

Notably, the R.O. value i.e. basic reproduction number of infections, stood 1.55 in mid-April reportedly has come down to 1.36 to ten days thereafter. Also, so far, reportedly 70 percent of cases affected with SARS Cov2 exhibited mild symptoms, which may provide some respite. But equally important to keep in mind that more expatriate countrymen and migrant workers are returning to their homeland, causing alarm to state and district administrations on the possibility of a further surge in a new infection.

Thus, at this juncture, it is important to take note of the health infrastructure of individual states, as 17 states on record have earmarked hospitals for dedicated treatment of Covid-19 patients with separate areas for suspected and confirmed cases. Using data from the National Health Profile–2019, it is observable that there are 7,13,986 total government hospital beds available in India. This amounts to 0.55 beds per 1000 population. The elderly population (aged 60 and above) is especially vulnerable, given more complications that are reported for patients in this age group. The availability of beds for the elderly population in India is 5.18 beds per 1000 population. Again, there are inter-state variations in the number of beds available per patient, ICU, and ventilator facilities. It can be observed that many states lie below the national level figure (0.55 beds per 1000 population), these include Bihar, Jharkhand, Gujarat, Uttar Pradesh, Andhra Pradesh, Chhattisgarh, Madhya Pradesh, Haryana, Maharashtra, Odisha, Assam, and Manipur. These 12 states together account for close to 70% of the total population in India. Bihar has an acute shortage of government hospital beds with just 0.11 beds available per 1000 population. Some states do better on this metric such as West Bengal (2.25 government beds per 1000) and Sikkim (2.34 government beds per 1000). The capital city of Delhi has 1.05 beds per 1000 population and the southern states of Kerala (1.05 beds per 1000) and Tamil Nadu (1.1 beds per 1000) also have better availability of beds. The scenario is pretty similar when the analysis is done for just the elderly population: Northeastern states do far better than others; southern states also have a higher number of beds available for elderly population — for example, Kerala (7.4), Tamil Nadu (7.8), Karnataka (8.6) — while northern and central states have relatively low availability of government beds for the elderly population. It is undeniable that the availability of government beds is abysmally low in India, and an epidemic like coronavirus can very quickly complicate the problem even further. An estimated 5-10% of total patients will require critical care in the form of ventilator support. Now, the Indian Council of Medical Research, the apex body, has approved private hospitals to treat COVID-19 patients. With the inclusion of private hospitals in the fray, the bed capacity for Covid-19 patients might see improvement, but still the same should be inadequate if a surge in patients requiring indoor-based care is unfortunately witnessed. The infrastructure stress will be especially acute in eight high-burden states, led by Gujarat, Maharashtra, and Delhi. Already, as per media reports, two of the high prevalent states for Covid-19, like Delhi and Tamil Nadu with its increasing infection rate has caused alarm for the existing government hospital beds. The Union government instructed health authorities of all major states to reserve at least 20 percent bed for Covid-19 patients in this scenario.

Notwithstanding the COVID-19 tracker’s updates, at this stage even it is not clear how bad the outbreak is in a particular area or what share of the population the disease or has recovered from it. Health Experts say that non-availability of this information, precluding the scientific, clinical, and public health community from making any sound estimation about the disease spread. Testing criteria have changed and testing of some symptomatic patients and their contacts, some asymptomatic patients, some returning migrants, and some healthcare workers in place. But this varies from district to district, state to state. Any robust calculation would require information on the qualities of this testing denominator to make reasonable extrapolations for the remainder of the populace. Health specialists additionally express that the vulnerability profile of at-risk populace in India will be one of a kind, with its blend of malnutrition, stunting, non-communicable diseases, and respiratory diseases, as will be the demography a more youthful populace. As observed, most local jurisdictions do not collect data on the age groups and disease profile of hospitalized patients, the length of stay of hospital admissions, the numbers transferred from one level of care to another, all of which hospital administrators would need to plan bed capacity.

Commendably, the Indian Council of Medical Research (ICMR) has started a large-scale exercise to assess Covid-19 exposure across the country, covering 60 districts, 10 cities, and 21 states to test over 24 thousand subjects. Armed with serological tests – blood tests that look for antibodies to diagnose exposure to a microorganism, in this case, the novel coronavirus — teams across India are trying to gauge the incidence of Covid-19. It is an important exercise at this juncture and expected to throw suitable insights into halting the outbreak. Simultaneously efforts should be considered to generate state and district-wise straightforward tally as to what number of patients treated, their analyzed test reports and data about their segment, socioeconomic and health status, with the goal that state administration can find a way to adjust lives and livelihood. The declaration that generally safe patients can self-confine at home will give some reprieve, yet this may pose a potential danger of transmission in the community, as health experts opined and added that given the conditions, the nation’s health systems need to bend over endeavors to contain case growth and enlarge health infrastructure as much possible.

Why Creating Awareness and Prevention of Suicide is Indispensable for the Nation?

A belligerent Dragon dancing with the Elephant