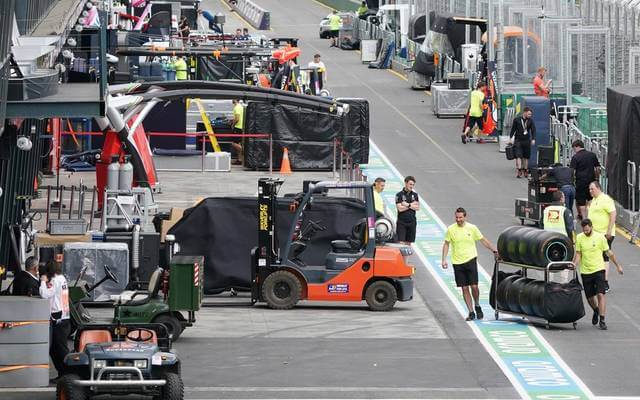 Montreal » Formula 1 is being slowed down by the corona pandemic, and now has to postpone the Canada race planned as the ninth round of the season.

The organizers of the World Cup run in Montreal scheduled for June 14 announced the postponement of the Grand Prix indefinitely. The guest performances in Australia, Bahrain, Vietnam, China, the Netherlands, Spain, Monaco and Azerbaijan had previously been cancelled or rescheduled. Actually there were 22 Grand Prix in the racing calendar for this year, that would have been a record. It is now open whether the season can still begin.

Shortly before the news from Canada, Formula 1 had ordered an even longer standstill in the racing factories. The compulsory vacation, during which no work on the development of the racing cars is permitted, is extended by another two weeks to 35 days. This unanimous decision of all teams and the leaders of the racing series was approved by the World Motorsport Council. Because of the coronavirus pandemic, the summer break had already been brought forward and extended. The five-week factory vacation must be taken by the racing teams and engine manufacturers by the end of May.

Another extension is the subject of discussion, according to the FIA. Mercedes Motorsport Director Toto Wolff had told the newspaper “Austria” about the possible start of the season: “I hope in autumn.”

The racing series could try to save their season with ghost races without spectators. World Cup races behind closed doors would now be “seriously checked”, the BBC reported after a video shoot with team leaders, rights holders and world association leader Jean Todt. Formula 1 hopes that the situation in the corona pandemic in Europe will improve enough for ghost races in July or August. The starting point could be the track in Silverstone in the UK, near which seven of the ten racing teams are located.

Concern over possible team failures has also fueled a new discussion about further reducing the spending limit already decided. Instead of the planned $ 175 million annually, the budget limit is now set to be a maximum of $ 150 million next year. A further cut to $ 125 million (€ 115 million) was initially rejected by the industry giants Mercedes, Ferrari and Red Bull, specialist media reported.

The main point of contention is the cost of research and development. The three top teams supply most of the other racing teams with components or engine units and first have to invest millions in development. This must be taken into account when setting a budget limit, it said. Further talks should bring a solution in the coming days.

After the McLaren, Williams and Racing Point stables, Formula 1 leadership has also taken austerity measures. According to media reports, managing director Chase Carey, sports director Ross Brawn and 15 other executives are waiving 20 percent of their wages for two months due to the corona crisis. In addition, half of the 500 employees of the Formula 1 operating company were sent on compulsory leave. This led to resentment among the employees.

The Taiwan dilemma of India

Xi defends China’s response to the epidemic, WHO promises investigation

Palestine: The Foreign Ministry summons the representative of Austria to protest the country’s legal observations to the International Criminal Court

Israel: The first hearing of Netanyahu in corruption charges has ended

China’s control of Hong Kong could lead to US sanctions

Indian states seek to postpone the resumption of flights after an...