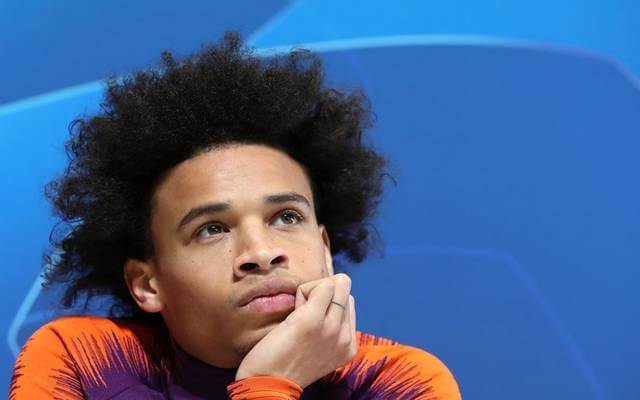 London – championship dreams are in danger, hot title fights are on hold. Because of the coronavirus pandemic, the game is suspended in most soccer leagues around the world. The professionals have to keep fit at home until further notice and pass the time cooking or playing the piano.

After months of injury due to a cruciate ligament injury, Leroy Sane had just made his comeback on the pitch. At the end of February, it was used in the Manchester City U23. When he will play for the first team of the English champions again is open. Coach Pep Guardiola said it would take weeks. The coronavirus crisis is now months away. A move to Bayern in summer, which until recently was considered likely, is apparently no longer an issue. According to a “kicker” report, the trend in Munich is now clearly against Sanes’ obligation.

In the middle of the coronavirus crisis, Mesut Ozil surprised with good news. The Arsenal midfielder and his wife Amine announced the birth of their first child on social media. To this end, they published a photo together with their daughter Eda. The forced break in the English Premier League should not bother him too much. In terms of sport, things went uphill for Ozil after turbulent times. However, he still occupies only the tenth place in the table with the Gunners.

For Ilkay Gundogan, coffee and face time are “two necessary things” in this difficult time. This revealed the professional from the English champion Manchester City on Instagram. He and his team occupy second place in the table, but 25 points behind Liverpool FC. Given this unachievable backlog, Gundogan told the ZDF sports studio that it would be “only fair” if the Reds were awarded the Premier League title if the season could not be overdue to the coronavirus. The goal of the Premier League clubs, however, is to continue in the summer.

With Chelsea FC, Antonio Rudiger recently headed for the Champions League. From the isolation, the defender posted a video showing him juggling with toilet paper. Numerous soccer stars took part in the challenge. Antonio Rudiger also supports the “WeKickCorona” initiative launched by Bundesliga professionals Leon Goretzka and Joshua Kimmich. “Together we must now isolate our toughest opponent,” wrote Rudiger. The fact that he has to stay at home until further notice also has a positive side for the 27-year-old: he has plenty of time for his wife and son, who was born in February.

Toni Kroos keeps his followers on social media happy with daily challenges, where there is also something to be won. The world champion of 2014 and multiple Champions League winner from Real Madrid publish the best videos on his account. But sometimes Kroos also finds clear words. So he called for the precautionary measures to be observed and warned the “incorrigible” people who still go out. “Please leave it, stay home!” He said. “This only lengthens this whole situation and is extremely dangerous for everyone who belongs to this risk group.” With Real, he is two points behind rival FC Barcelona.

National goalkeeper Marc-Andre ter Stegen misses football. With FC Barcelona he is the frontrunner in the Spanish league. With eleven games remaining, nothing is decided yet. Only two points separate the championship leader Real Madrid. “It is difficult, especially in the most important phase of the season, to retreat and hold on to yourself,” said ter Stegen to the online portal “Spox”. The 27-year-old keeps in shape with a fitness app. It was announced on Monday that ter Stegen and his teammates at Barca temporarily waived 70 percent of their salary.

Until the league stop, leaders Juventus Turin in Serie A fought a hot race with Lazio Rome. The “old lady” is only one point ahead. Former world champion Sami Khedira has not been there since December because of knee surgery. He had only recently returned to team training. The 32-year-old apparently used the renewed football-free time to teach himself to play the piano. A video on Twitter shows Khedira on the keys. “The result of two days,” he wrote.

With Paris Saint-Germain, Julian Draxler confidently leads the French Ligue 1 table. The 26-year-old spends isolation with his girlfriend, the dancer Sethanie Taing. To pass the time, the former Schalke gamers on the Internet with his buddies Mesut Ozil and Sead Kolasinac «Fortnite» and is active in the kitchen. “In order to stay fit in social distancing, I don’t just train at home, I also like to cook healthy and fresh food,” Draxler wrote on Instagram and posted a video.

A few weeks ago, Robin Gosens and Atalanta Bergamo celebrated the quarter-finals of the Champions League. When or whether the 25-year-old contests the next round in the premier class has long been irrelevant because of the pandemic that hit Italy particularly hard. “I love Italy,” wrote Gosens, who is a candidate for the German national team, on Instagram. «In this difficult time, my thoughts are general with all Bergamaschi and all Italians. We can only fight the virus together! » Atalanta is currently fourth in Serie A.

Alexander Baumjohann was just about to win the Australian championship with Sydney FC before the football season was stopped down under. “Of course there are now much more important things than football, it is best that league operations have been stopped,” said the 33-year-old to the “kicker”. “But the time is extremely unfortunate for us.” Baumjohann, who has already played for Gladbach, Schalke, Bayern, and Hertha in the Bundesliga, hopes that the season will not be stopped, but will eventually be played out. «This year’s work should be recognized.»

Benedikt Howedes is currently second in the table with Lokomotiv Moscow in Russia, where play will be suspended until at least May 31. Howedes criticized in his column on the online portal t-online.de just two weeks ago that the training was continuing. The players are now self-isolated. From afar, the 2014 world champion participates in the “WeKickCorona” initiative. “Stay healthy, stay at home and join in,” wrote Howedes on Twitter.

Timo Baumgartl spends the time of isolation on the instructions of his club in Eindhoven. “My Labrador Jimmy is happy that I am now home more often,” said the 24-year-old in an interview with Sport1. He apparently doesn’t mind quarantine in the Netherlands. «I have a house with a garden here, we have space. At least I can still move freely here. That would not be the case in my home country. » With PSV Eindhoven, Baumgartl takes fourth place in the Dutch Eredivisie.

The Inter Miami soccer club, founded by superstar David Beckham, was only able to play two games in the American MLS before the soccer break began in the United States. Inter-professional Jerome Kiesewetter reported to the German press agency about hamster purchases in Miami. The native of Berlin was also shocked by the weapons purchases by some Americans. Like all professionals, Kiesewetter stays fit at home. The interruption is like a second preparation for him. “You wait for the go, which may take longer than expected,” said the 27-year-old, “but it is well known that health is not to be trifled with.”